[BILLBOARD] B.A.P 'NOIR' No. 1 on World Album Chart and Article

B.A.p is now number one in the Billboard World Charts!!! 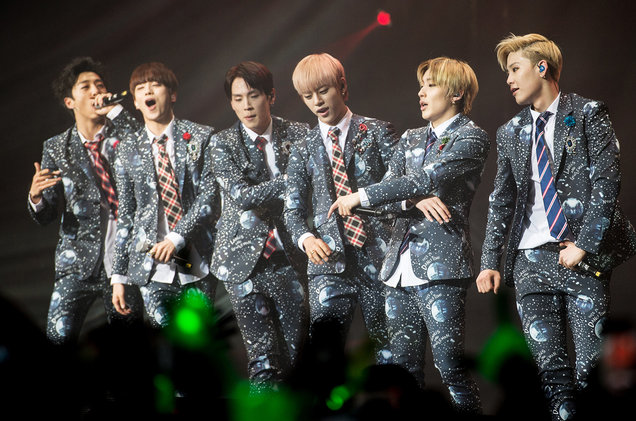 B.A.P are reclaiming the throne with their second, full-length album Noir.
For more than two years, the boy band held the record as the K-pop act with the most No. 1s on Billboard's World Albums chart thanks to their impressive streak of chart-toppers in 2013 to 2014. In the time since, fellow boy band GOT7 creeped up and tied their record with three No. 1s themselves in 2016, but this latest release secures the B.A.P guys back on top.
B.A.P's sophomore full-length Noir moves 1,000 copies this week, sending them to No. 1 on the ranking. The 13-track LP joins the sextet's other chart-toppers: their One Shot EP (which hit No. 1 in March 2013), the Badman EP (which ruled in August 2013), and their First Sensibility album (No. 1 in February 2014). Each release ruled the chart for one week apiece.
Throughout their career, B.A.P has consistently tapped into new genres and sounds and Noir is no exception. Co-executive produced by leader Bang Yongguk, the album is led by the aggressive, hip-hop anthem "Skydive" that showcases the band in their sweet spot to blend a slew of powerful rap and vocal performances over pounding productions. But there's loads more to found inside here including standouts like the technicolor-funk gem "Killer," the intense gospel-rap cut "Ribbons in the Sky," plus a slew of different takes on R&B, from the emotional (listen to catchy cuts like "Walk" or "Fermata") to sensual ("I Guess I Need U" sees the guys admitting secret fantasies).
Noir's chart-topping success also represents something larger for the group, who went on an unplanned hiatus while filing a lawsuit against their label, TS Entertainment, in November 2014 over unfair work conditions and profit distributions. Nearly a year later, the group settled and returned to TS Entertainment, and have since released three more EPs before Noir. A year is nearly a lifetime in the rapidly moving K-pop world and B.A.P returning to the top of the charts hints that they've kept their strong U.S. fanbase intact despite the time away. Also, member Yongguk is currently dealing with anxiety issues and sitting out of promotions, despite working so heavily on writing and producing the album. His hard work is obviously not going unnoticed by fans.
B.A.P once again reign over an elite group of K-pop acts with multiple World Album chart-toppers. Currently, that list includes EXO, BTS, Girls' Generation, G-Dragon, SHINee, f(x) and Girls' Generation-TTS (all with two) and GOT7 (with three). B.A.P are also only second to BTS for most weeks atop of World Albums among K-pop acts with BTS boasting six weeks (thanks to four weeks from The Most Beautiful Moment in Life, Pt. 2 and another two with Wings) and B.A.P now holding four. We'll see next week if B.A.P can hold on for another week to extend the reign to five weeks.
© 2016 Billboard