Cheery B.A.P Members! Check Out Tidbits From Their “FEEL SO GOOD” 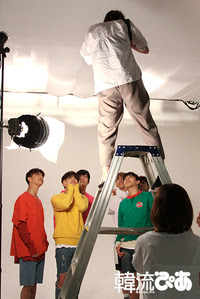 (First paragraphs omitted; it talks about their activities after the hiatus)

As a song with a mix of upbeat and heart-pumping pop sounds, the members highlight that “it’s a song that cheers you up no matter what. We released this in Spring in Korea, but I think it’s a perfect song for Summer too.” (Jongup) and “I want the viewers to focus on the choreography which is a crucial part of the performance, and the “nearly out of reach” feeling [as per the lyrics] that we show in the Japanese MV.” (Zelo)

In the issue that will be released on 7/22, we of course asked them about the charm points of the single, and in questions related to the title song “FEEL SO GOOD”, we asked them to draw something to the theme “speaking of Summer, what does that bring up?”. The pieces of art they drew as if they were doing their holiday homework (!) in serious mode is not to be missed! And who was the member who stayed behind even after the interview to complete their drawing?! Please check out the answer in the magazine!

Corresponding to the requests for cheerful poses to match the song’s image, the praiseworthy photos that they took with their utmost effort aren’t to be missed either (laughs).

Hanryu Pia Online has found out why B.A.P decided to challenge a new musicality now and also about the 2 coupling songs!

“FEEL SO GOOD” was the lead track for the mini album “CARNIVAL” that you released in Korea. Leader Bang Yongguk participated in the music and lyric composition of it, but what’s the reason for the complete image change to the album “MATRIX” released last year, which was about B.A.P?

YG: I thought to further enrich the content in the concerts. Since we’ll be able to create a new section in the concert’s configuration if we make an album containing cheerful types of songs that we haven’t tried before. The fact that we’re attempting something that we haven’t challenged before, also makes it a meaningful work to us.

Since “FEEL SO GOOD” has a different image to all the singles that we’ve released before, I hope BABYz of course, and then other people in Japan who don’t know of us to like the song.

How was the response from the fans after going on a world tour with the inclusion of these new sounds?

HC: I feel that the reactions have increased and become more extravagant and passionate, since the number of fun songs with a catchy beat have increased. I’m happy since the chances of becoming one with the audience have grown!

DH: “FREAKY SOUND” is a party song and will definitely cheer you up!
YG: I’d actually worked on in when creating “MATRIX”, but I let go of it because I thought it wouldn’t suit us. So it went here and there before finally coming back to us, and was included in this new single (laughs). It felt really strange.
YJ: Coming back after you let it go, it’s a boomerang song! “GOOD TIME” is part of the ‘TIME’ series after “BACK IN TIME” from the 1st Japanese album “Best. Absolute. Perfect” (laughs). Please check out these two songs together!

The members seemed to love these songs which they have a mysterious fate with, as much as the lead track “FEEL SO GOOD”, and were humming it before the interview. During the interview itself, it wasn’t humming, but you could hear actual singing from various corners of the studio, and they were aware of each other’s actions, like when Daehyun was singing aside for a video message, Himchan commented “he overdid the way he sang ‘Feel So Good~ ♪’ (laughs)”.

And so, we were able to witness how they’ve been with their current promotions, and as well as their closeness through not only the interview, but the behind the scenes as well!