[Koogle] B.A.P Brings LA to Life with Spectacular Multi-Faceted Show on Their 'LIVE ON EARTH 2016' Tour!

Shared by Melanie@BAPYESSIR.COM
For the full article click here!
Written by Katherine Chu

B.A.P made their grand return to the U.S. with the North American leg of their 'LIVE ON EARTH 2016 WORLD TOUR', two years after their first trot around the globe and less than a year after their hiatus/settlement with their label TS Entertainment! Organized by Powerhouse Live, the six-member group touched down in LA at the Microsoft Theater on April 17, putting on a spectacular show for Los Angelian BABYz. 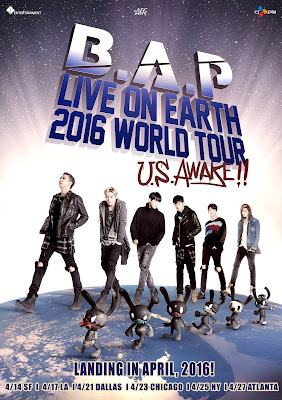 With it being the first weekend of Coachella, some may have felt concerned over the choice of date, and reasonably so, as Coachella is one of the biggest annual music festivals in California, garnering the masses to its desert location for the festivities. However, any doubts were quickly squashed once you entered the LA Live campus, as massive lines trailed to the front doors of the Microsoft Theater, with fans decked out in B.A.P gear, including the obligatory green Matoki mascot light stick, and several BABY leaders handing out support banners for the show.

The theater was quickly filled up with eager fans, and once the lights went down as the epic intro video began playing on the giant displays, concert-goers lit up the darkness with a sea of green bunnies, moving back and forth in synchronized motion. With fiery performances of their greatest and most recent hits, including their debut song 'Warrior, the oh-so-perfectly dramatic 'One Shot', the emotional '1004', their head-banger 'Bang Bang', and even the upbeat, summer-festive tracks 'Feel So Good' and 'Carnival', B.A.P's LA show was a multi-faceted gem. Fans were treated to swoon-worthy acts that had them drooling to sultry solo stages, head-banging to their rock-n-roll anthems, and most of all, clutching their joyous hearts as the boys of B.A.P graced the stage with their signature energy and zeal!

Not to mention, the boys' individual fan services were incredible! Zelo made sure to shake his 18-year-old booty as the self-proclaimed "sexy man" now, even twerking at one point, while Yongguk wasn't shy about showing off his tattoos with a seriously low-cut muscle tee (thank you, Yongguk's stylist). Youngjae and Himchan didn't spare any kisses blewn towards fans throughout the show, as Jongup made BABYz smile with his adorable shyness while Daehyun slayed them with his million-dollar smile and brilliant high-notes!

B.A.P is known for marching to the beat of their own drum and reigning the K-pop world with their unique flavor, so this show was going to be no different! It felt as though B.A.P had brought Coachella to us, as they showcased some of their best hits, which included exciting performances of a wide variety of genres - a feat that B.A.P has been only one of the few K-pop acts to be able to successfully achieve. The boy group wowed the crowd with spectacular performances that managed to encompass a K-pop concert, a rock show, and a hip-hop collective all into one.

Despite having visited a handful of cities before LA, the boys didn't lack in vivacity as they were all charisma and smiles when it came time to face their dedicated BABYz! During their ending ment, the members made sure to reassure fans that they were in a better place now, and that they were finally happy - a statement that surely meant a lot to fans who have been on this bumpy journey with them. The talented group wrapped up the show with an impressive encore of 'Bang Bang' and a surprise performance of their recent Japanese release 'Kingdom', reminding the world that, in case it's forgotten, the kings are back!

B.A.P stayed true to the theme of their tour, jolting Los Angeles awake and bringing it to life with the power of their music and the energy of their fans. What was your favorite moment at B.A.P's show in LA?