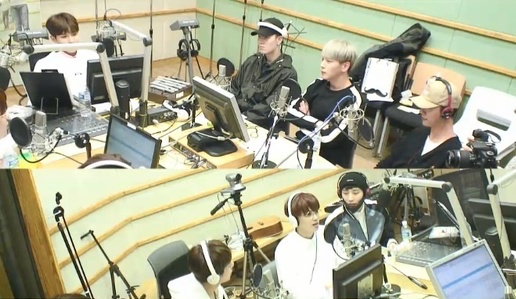 On February 29, B.A.P were guests on KBS CoolFM‘s “Super Junior’s Kiss the Radio.”The members ask each other things that they were curious about, revealing stories that have never been told.When asked if he’s ever received a confession from a female celebrity, Bang Yong Guk replies, “I’ve received five confessions, and I’ve turned all five of them down.” Super Junior‘s Ryeowook then asks all of the other members the same question.Daehyun reveals, “I’ve received contact information with the intention of becoming closer as friends, but there’s never been a female celebrity who’s given me her number because she was confessing to me. I’ve never received a confession.”Youngjae also says, “I’ve only gotten contact information from other guys. I’m close with BTS‘s Jin because when our promotions overlapped, we saw each other often and shared the same waiting room.”Meanwhile, Himchan makes everyone laugh when he says, “There was a lot when we first debuted, but ever since I’ve gained weight, and got older… I was really popular back then,” with a sad expression on his face.B.A.P is currently promoting their newest mini-album, “Carnival,” which was released on February 22. It includes their title track, “Feel So Good,” along with five other songs. With a bright and funky sound, as well as a more natural and free performance, B.A.P breaks apart from their “hard-core image.”They are also in the midst of their “B.A.P LIVE ON EARTH 2016 WORLD TOUR,” which started off with their concerts in Seoul on February 20 and 21, at Seoul’s Olympic Park. From April to July, they will travel to 15 different countries, including U.S., Mexico, Poland, Russia, and New Zealand. With 30 concerts planned, they will be meeting over 200,000 fans.