From TS's official facebook, they have announced that B.A.P have chosen to reconcile with the agency. 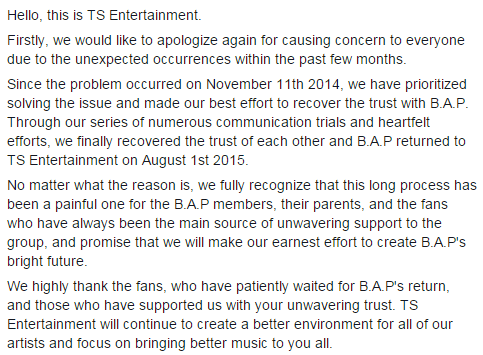 Since we believe that B.A.P will be back to their normal activities soon, BYS will also get back on track; we will update more frequently, and our translations service, blog and forum that was unactive during the lawsuit will come back to life in the coming days.


/!\ The six members of B.A.P filled a lawsuit against their company, TS Entertainment on November 26th, 2014.
BYS has been in semi-hiatus since then, and will resume activities as soon as B.A.P is back on track with a new recording label, as we hope for them.

NEW MODIFICATIONS ON THE PPT:
Added on July 3rd

Yongguk and Zelo both released solo tracks on their personal Soundcloud account during the lawsuit.
Both song have been written and composed by themselves.

Zelo then released "NO TITLE" on May 26th and here's the audio:

SUPPORT B.A.P AND SEND THEM LOVE THROUGH SNS USING THE HASHTAG #JUSTICEFORBAP

/!\ Since many people asked us the question, we believe fans must STOP BUYING merch until the lawsuit is over since it will only help TS and NOT B.A.P.
Posted on Wednesday, August 05, 2015