Do you remember our first batch of K-Pop idols’ very first tweets that took you on a trip down memory lane with Super Junior, Big Bang, and SHINee? Here’s our second batch of tweets just waiting to take you on a nostalgic journey with B.A.P,2NE1, and Block B!Check out the compilation of your biases’ very first tweets below and tell us if you remember these special moments!

Translation: “Hello, this is B.A.P’s Jongup. I will show you lots of awesome sides of me from now on. Please look forward to it.”
It has already been over three years since he’s posted this first tweet! Little did he know that he’d reach a whopping 603,000 followers! 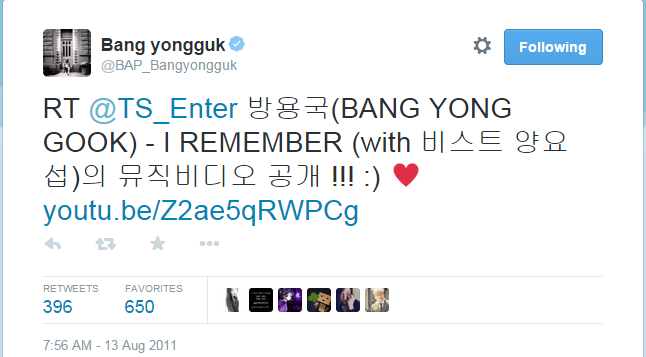 ♥ http://youtu.be/Z2ae5qRWPCg”
Yong Guk’s very first tweet was a retweet from his agency’s official account, TS Entertainment! The video in the tweet is his solo song featuring BEAST’s Yoseob!
3. Himchan on August 24, 2011 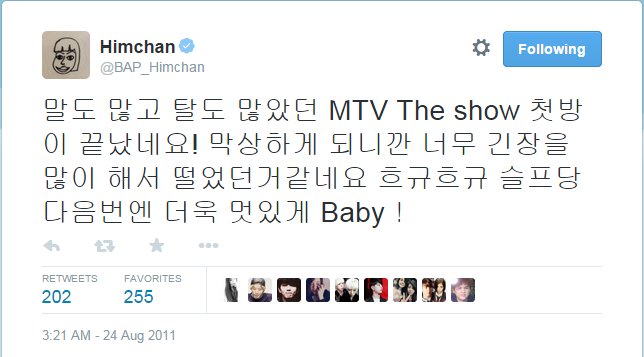 Translation: “Though there were a lot of things being said and a lot of flaws, the first episode of MTV ‘The Show’ has ended! I think I was shaking because I got nervous as it began airing. Sobs sobs. It’s sad, but next time I will look very cool. Baby!”
Oh, Himchan… you don’t have to worry about looking cool or not. You’re always awesome in the eyes of Baby!
4. Zelo on November 24, 2011 Translation: “Halo! Hello. This is the 3rd and youngest member who was revealed in our digital single album [Never Give Up], Zelo. Twitter START!! It’s finally the beginning YO! Hehe”
This was when B.A.P was still in the making and process of getting ready to debut. So adorable! He was only 15 years old at the time!
5. Dae Hyun on January 15, 2012

Translation: “This is B.A.P’s Daehyun. I have also started Twitter.”
LOL You are so blunt, Dae Hyun! But it’s okay, it was only because you just debuted and weren’t used to Twitter!
6. Young Jae on January 18, 2012

Translation: “Hello!!! This is Youngjae. Thank you. Haha~!”
So short, yet so impressionable!
©Koreaboo