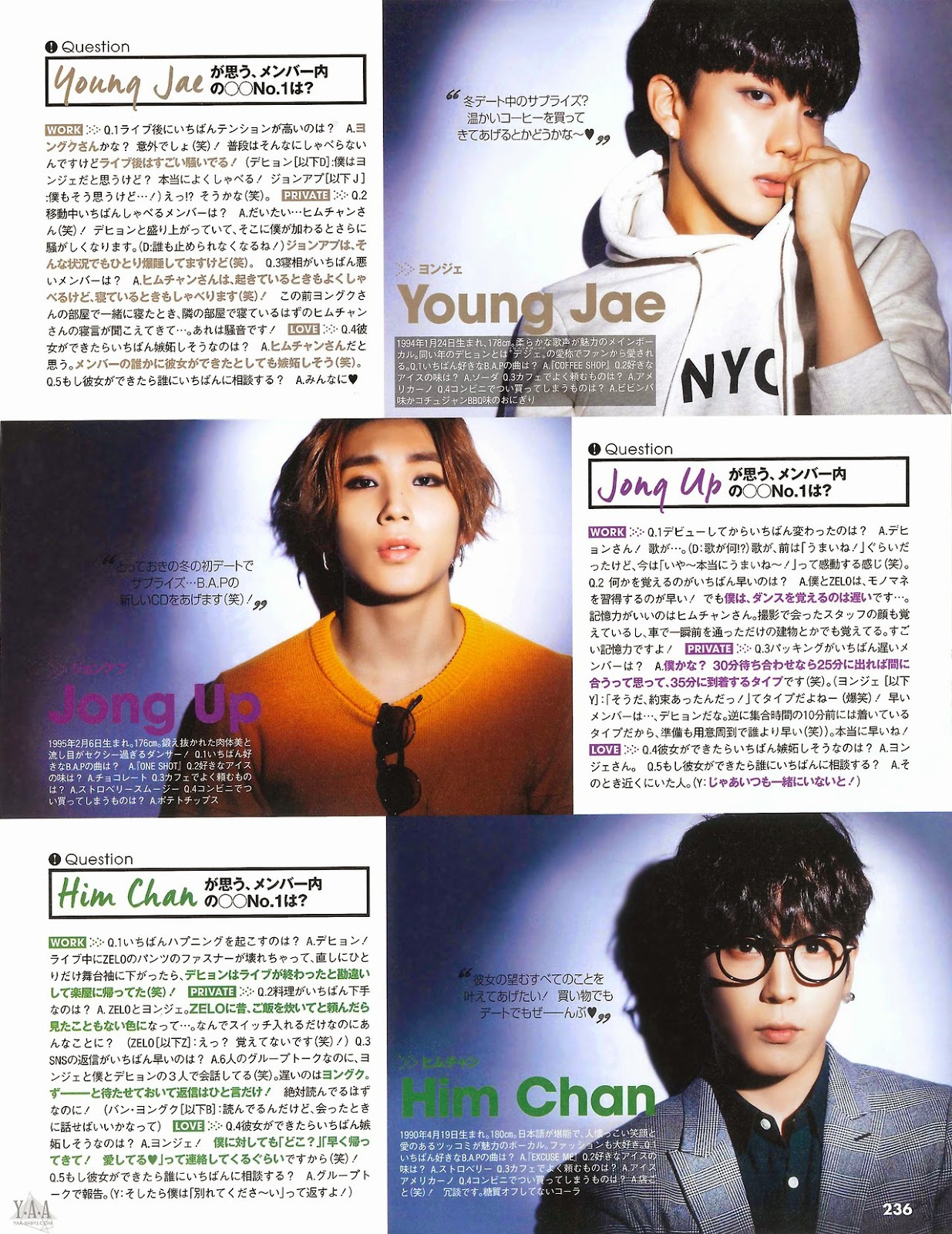 2012 Korean debut. In 2013, their Japanese debut with “Warrior”! Having strong individualistic sounds and powerful live performances is their charm; a 6-member group that’s popular in London, Paris, LA, NY and other places too. Their member’s daily fashion shown on tour and such are stylish and has a high standard score ♡
YOUNGJAE
Born on 1994, January 24. 178cm. A main vocal with a mellow voice as his charm. With the same-aged Daehyun, they’re nicknamed “Daejae” and loved by fans.
“I want to sweetly invite her to a date like “let’s play~♥” and go for a drive!” - Youngjae
WORK »
Q1. The one with the highest tension after lives?
YJ: Probably Yongguk-san? It’s a surprise right (laughs)! He doesn’t speak that much usually, but he’s really noisy after a live!
DH: I think it’s Youngjae? He really talks a lot!
JU: I think so too…!
YJ: Eh!? Is that so (laughs).


PRIVATE »
Q2. The member who talks the most when moving between schedules?
YJ: Mainly… Himchan-san (laughs)! He gets excited with Daehyun, and then including me, the noise just grows.
DH: To the point that no one can stop us!
YJ: Although Jongup can sleep deeply through those sorts of situations (laughs).
Q3. The one with the worst sleeping habits?
YJ: Himchan-san talks a lot when he’s awake, but he also talks when he’s asleep (laughs)! Recently, I slept with Yongguk-san in his room, and from the next room, I heard the presumably-asleep Himchan-san sleep talking… That’s noise disturbance!
LOVE »
“A surprise during a winter date? How about buying a hot coffee and giving it to her~♥” – Youngjae
Q4. Who would seem to get the most jealous if you got a girlfriend?
YJ: I think Himchan-san. He’ll seem to get jealous at whichever member that gets a girlfriend (laughs).
Q5. If you get a girlfriend, who would you tell first?
YJ: To everyone♥
JONGUP
Born on 1995, February 6. 176cm. A dancer with a beautifully sculpted body and a too-sexy sidelong gaze!
“Watching a movie and chatting at a café…♥ I want to try a normal date like that… (shy)” - Jongup
WORK »
Q1. The one who changed the most after debuting?
JU: Daehyun-san! His singing…
DH: What about my singing!?
JU: His singing, I used to think “it’s good!”, but now I feel that “woah~ it’s really good~!” and be moved (laughs).
Q2. The one to learn things quickest?
JU: Me and Zelo, the maknaes learn things quickly! But I’m slow at learning dances… The one with a good memory is Himchan-san. He can remember the faces of the staff from photoshoots, and the buildings that we pass momentarily in the car. It’s an amazing memorising power!
PRIVATE »
Q3. The slowest member at packing?
JU: Me? I’m the type to go at 25 minutes if we’re going to meet up in 30 minutes, and then end up arriving in 35 minutes (laughs).
YJ: Truly the “oh right, there was an agreement!” type (bursts out laughing)! The quick member is… Daehyun. On the opposite, he’s the type to arrive 10 minutes before the promised time, so he’s prepared all-round and arrived earlier than anyone else (laughs).
JU: He really is quick!
LOVE »
“The best surprise for a first date during winter… I will give her B.A.P’s newest CD (laughs)!” - Jongup
Q4. Who would seem to get the most jealous if you got a girlfriend?
JU: Youngjae-san
Q5. If you get a girlfriend, who would you tell first?
JU: The person close-by at that time.
YJ: Then I gotta be together with you all the time!
HIMCHAN
Born on 1990, April 19. 180cm. Proficient in Japanese, a vocalist with a friendly smile and lovable verbal attacks. Also a lover of fashion.
“When I get a girlfriend, I want to play in Japan that I love! Shopping together will be nice” – Himchan
WORK »
Q1. The one who causes most happenings?
HC: Daehyun! Zelo’s pant zipper broke during a live, and when he went off stage by himself to fix it, Daehyun mistook it as the live being finished and went backstage (laughs)!
PRIVATE »
Q2. The one who’s worst at cooking?
HC: Zelo and Youngjae. In the past, I asked Zelo to make the rice, and it turned out to be some colour I’d never seen… How did it turn out like that when all you need to do is turn on the switch?
ZL: Eh? I don’t remember (laughs)!
Q3. The one quickest at replying to SNS?
HC: It’s a 6-person group chat, yet it’s a 3-person conversation between Youngjae, me and Daehyun (laughs). The slow one is Yongguk. He makes me/us wait soooooo long and yet his reply is a single word! Even though he’s definitely been reading!
YG: I am reading, but I thought it’s fine if we talk when we meet.
LOVE »
“I want to fulfil all my girlfriend’s wishes! Whether it’s shopping or going on a date, allll of it♥” – Himchan
Q4. Who would seem to get the most jealous if you got a girlfriend?
HC: Youngjae! He contacts me with “where are you?” and “hurry up and come back! I love you♥” after all (laughs)!
Q5. If you get a girlfriend, who would you tell first?
HC: I would report it in the group chat.
YJ: And then I’ll reply with “please break u~p”! 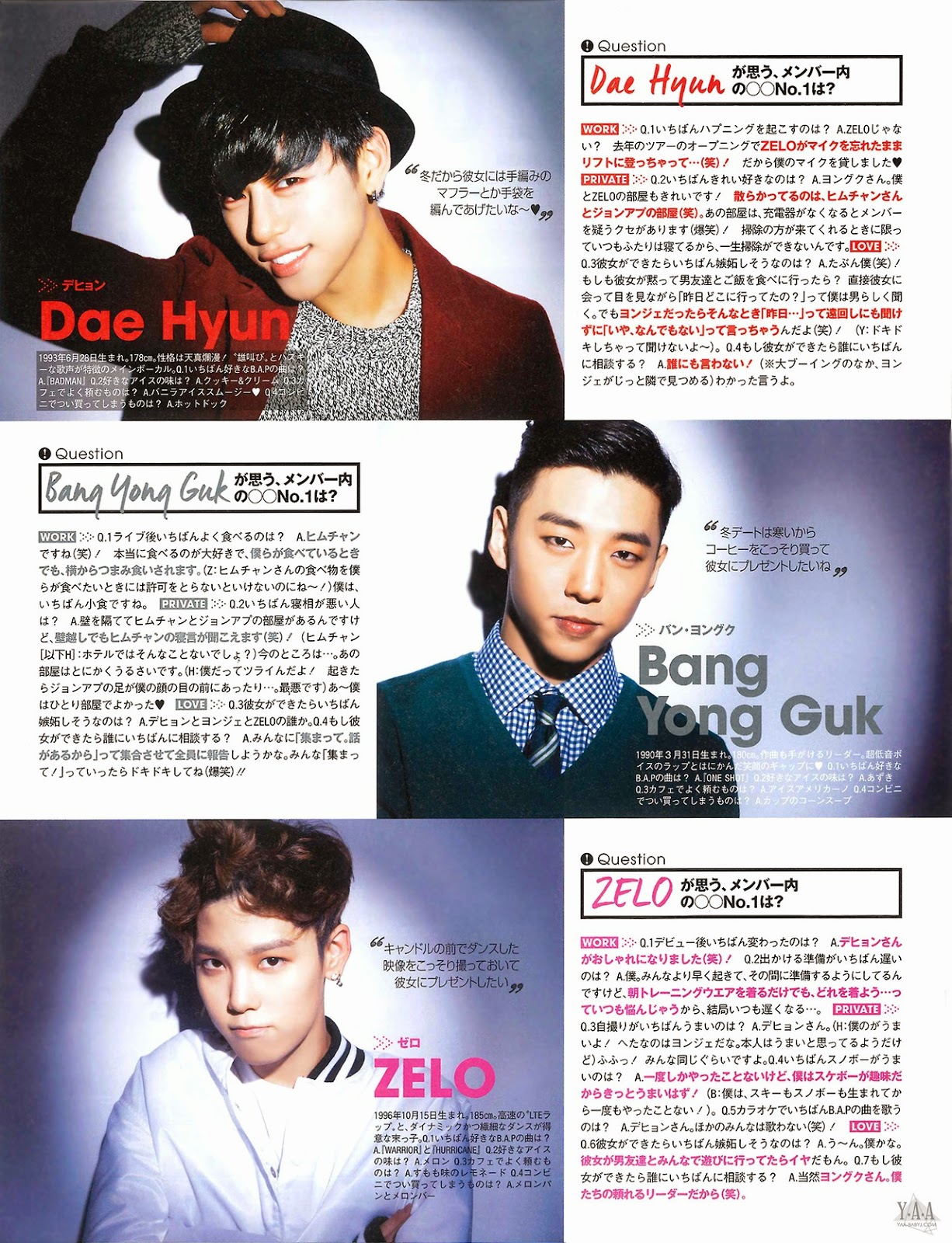 DAEHYUN
Born on 1993, June 28. 178cm. His personality is tenshinranman! [T/N: 4 character idiom meaning “simple and innocent”] A main vocal with his characteristic “high-pitched scream” and husky voice.
“A winter date would be outdoors after all! Let’s go out with the two of us to watch my favourite snow♥” - Daehyun
WORK »
Q1. The one who causes most happenings?
DH: Probably Zelo? In the opening of last year’s tour, Zelo went on the stage lift and forgot his microphone… (laughs)! So I lent him mine ♥
PRIVATE »
Q2. The cleanest one is?
DH: Yongguk-san. Me and Zelo’s room are clean too! The messy one is Himchan-san and Jongup’s room (laughs). They have a habit of being suspicious of the other members if chargers are missing from that room (bursts out laughing)! They’ve only cleaned up when they moved in, and because the two of them are always asleep, they’ll never be able to clean up.
LOVE »
“Since it’s winter, I want to knit handmade scarves or gloves for her~♥“ – Daehyun
Q3. Who would seem to get the most jealous if you got a girlfriend?
DH: Probably me (laughs)! If my girlfriend didn’t’ tell me and went to eat dinner with a male friend? I would go directly to her and look her in the eye and ask her “where did you go yesterday” like a man. However, if it was Youngjae, he wouldn’t even be able to ask in a roundabout way like “yesterday…”, and just say “nope, it’s nothing” (laughs)!
YJ: I will get nervous and become unable to ask~
Q4. If you get a girlfriend, who would you tell first?
DH: I won’t tell anyone! (※Whilst being booed loudly, Youngjae stared straight at him from his side)
DH: I got it, I’ll tell.
ZELO
Born on 1996, October 15. 185cm. The maknae with high speed “LTE rap” and a knack for dynamic and delicate dances.
“A winter date… overseas! I want to try snowboarding at Vancouver♪” – Zelo
WORK »
Q1. The one who changed the most after debuting?
ZL: Daehyun-san has become fashionable (laughs)!
Q2. The slowest at getting ready to go out?
ZL: Me. I wake up earlier than everyone and plan to finish getting ready then, but I always worry about what clothes to wear, even if it’s just training gear, so I always end up being the latest…
PRIVATE »
Q3. The best at taking selcas?
ZL: Daehyun-san.
HC: I’m better! The unskilled one is Youngjae. Though it seems like he thinks he’s good at it.
ZL: Huhu! Everyone’s about the same.
Q4. The one best at snowboarding?
ZL: I’ve only tried it once, but since ii have an interest in snowboarding, I’ll definitely be good at it!
YG: I’ve never skied nor snowboarded even once since I was born!
Q5. The one who sings the most B.A.P songs at karaoke?
ZL: Daehyun-san. Everyone else doesn’t (laughs)!
LOVE »
“I want to secretly take footage of our dance in front of candles, and give it to her as a present” – Zelo
Q6. Who would seem to get the most jealous if you got a girlfriend?b
ZL: Hmm~m. Probably me. I wouldn’t like it if she went out with to play male friends and others.
Q7. If you get a girlfriend, who would you tell first?
ZL: Of course Yongguk-san. Because he’s our dependable leader (laughs).
Q1. Favourite B.A.P song?
YJ: “Coffee Shop”.
JU: “One Shot”.
HC: “Excuse Me”.
DH: “Badman”.
YG: “One Shot”.
ZL: “Warrior” and “Hurricane”.
Q2. Favourite ice cream flavour?
YJ: Soda.
JU: Chocolate.
HC: Strawberry.
DH: Cookies and cream.
YG: Red bean.
ZL: Melon.
Q3. Something you order regularly at a café?
YJ: Americano.
JU: Strawberry smoothie.
HC: Iced americano.
DH: Vanilla icecream smoothie ♥
YG: Iced americano.
ZL: Japanese plum flavoured lemonade.
Q4. Something you just end up buying at the convenience store?
YJ: Bibimbap flavoured or gochujang-bbq flavoured onigiri.
JU: Potato chips.
HC: The whole store (laughs)! I’m joking. Non low-carb cola.
DH: Hot dog
YG: Cup corn soup.
ZL: Melon-pan and melon [icecream] bar.
Translation © cassie_babyz 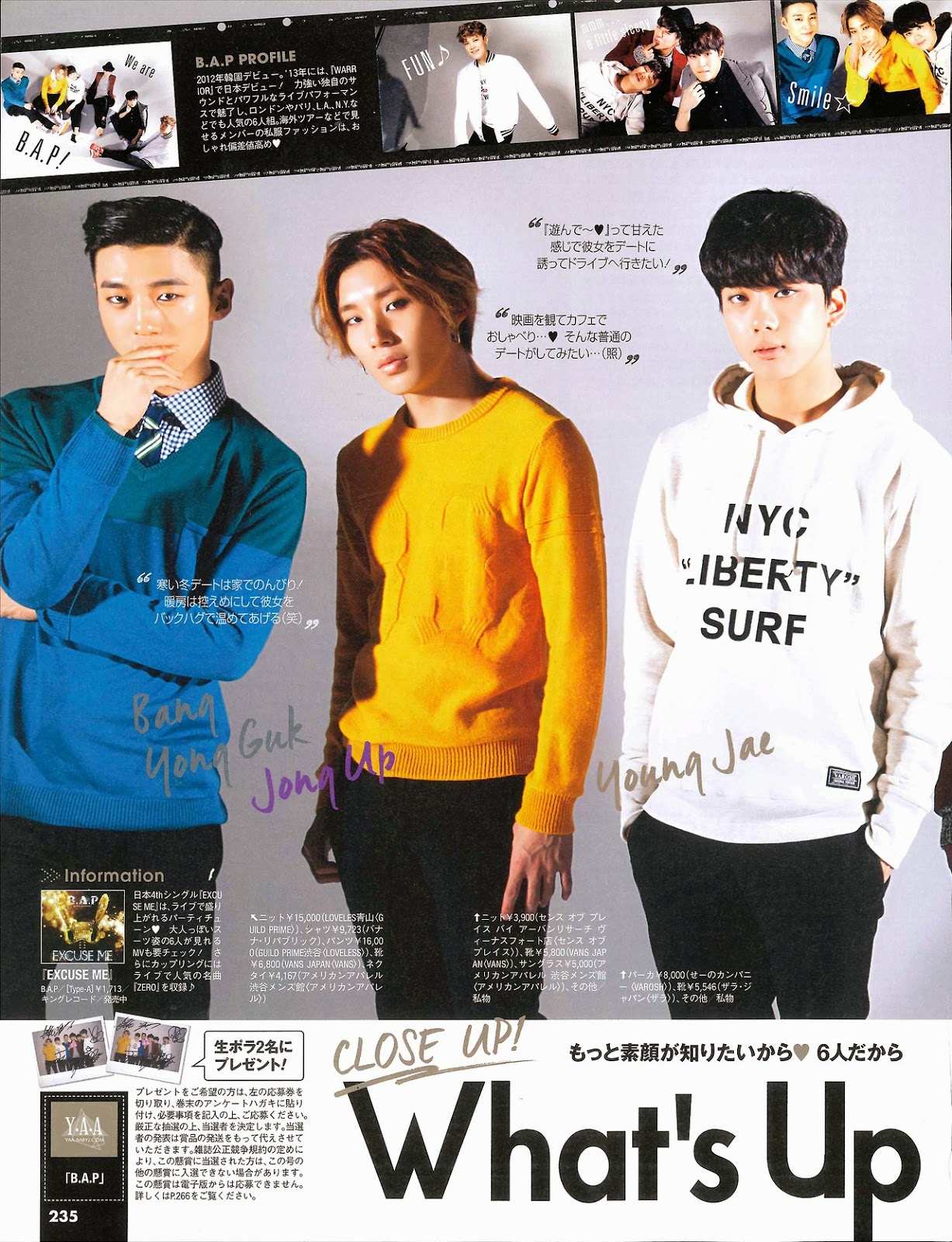 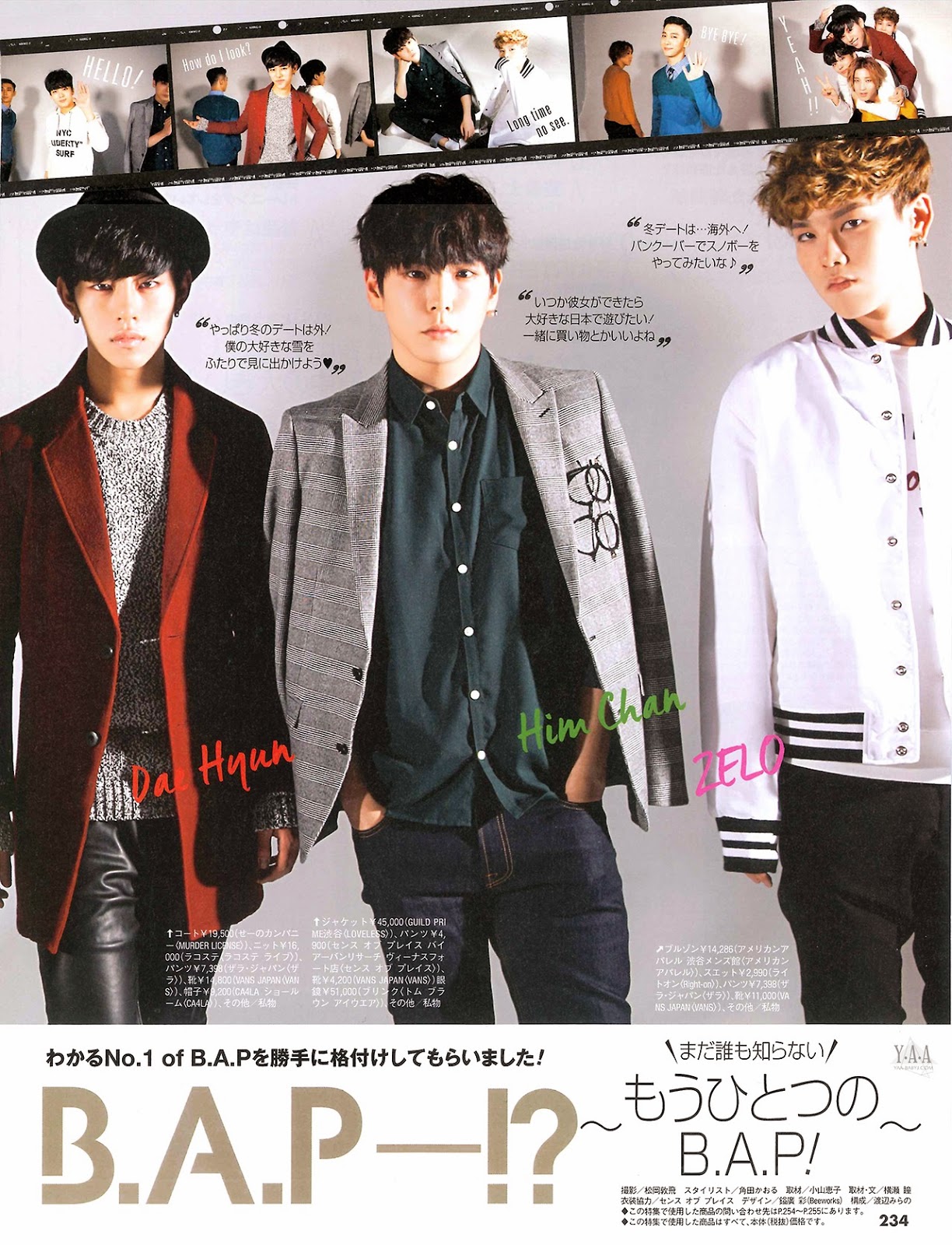 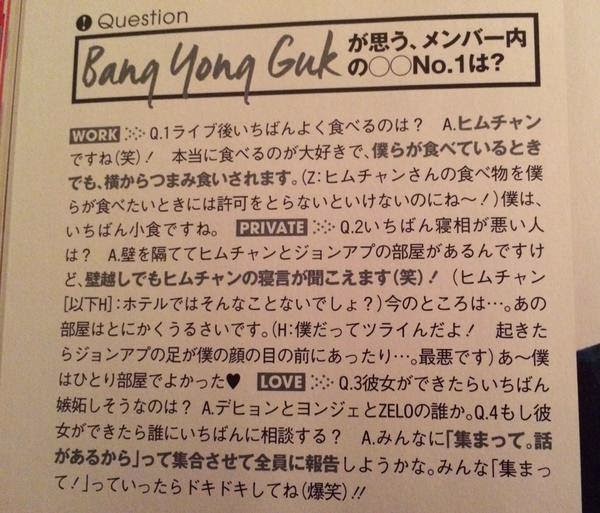 Question! Bang Yongguk, who do you think is #1 in your group?
Work>> Q1: Who eats the best after a performance?
YG: Himchan! (laughs) He really loves eating, even when we are eating together he is eating snacks on the side. (Z: If we want to eat what Himchan has, we have to get permission before we eat it!) I eat the least.
Private>> Q2: Who sleeps the worst?
YG: There is a wall between Himchan and Jongup have a room (and mine) but I can still hear Himchan’s sleep talking! (laughs) (H: I don’t do that in hotels right?) Now…that room is especially loud. (H: It’s difficult for me! When I wake up Jongup’s feet are in my face…It’s awful) Aah, it’s great having my own room
Love>> Q3: Which member do you think would be most jealous once they get a girlfriend?
YG: Daehyun or Youngjae or Zelo.
Q4: Who would have the best advice when getting a girlfriend?
YG: Everyone. Gathering together with "Everyone come here. There’s something to say" is what we’d do I think. When we say "Come here!" we get excited (explosive laughter) 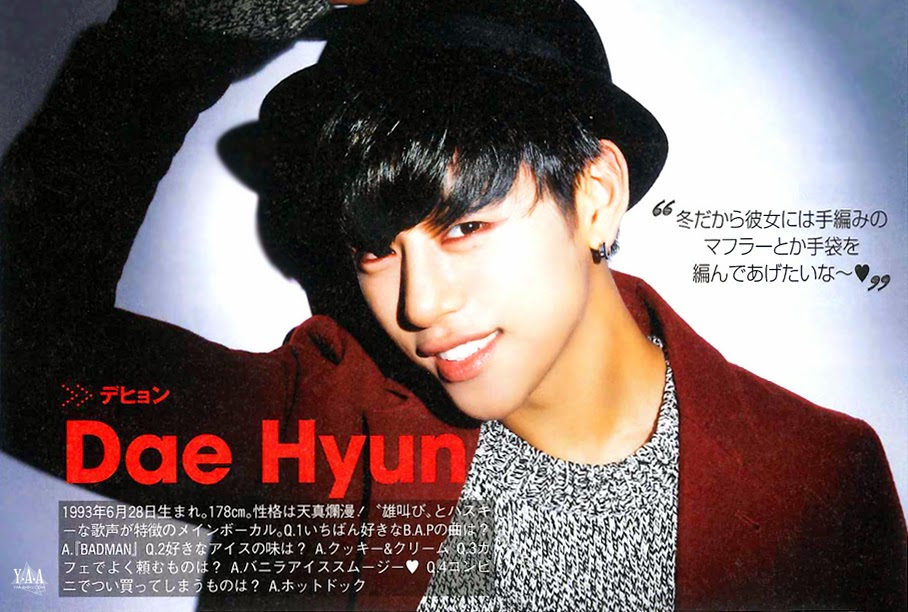 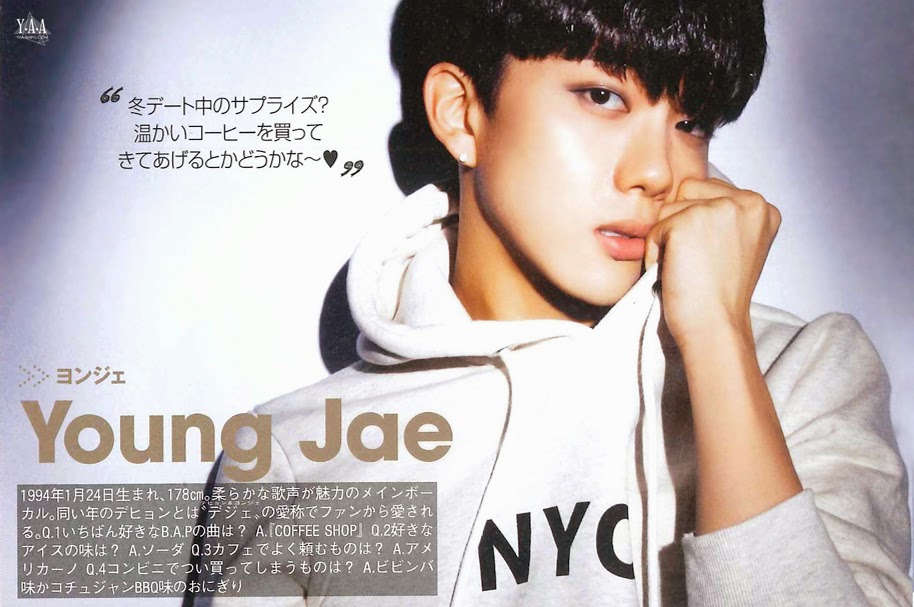 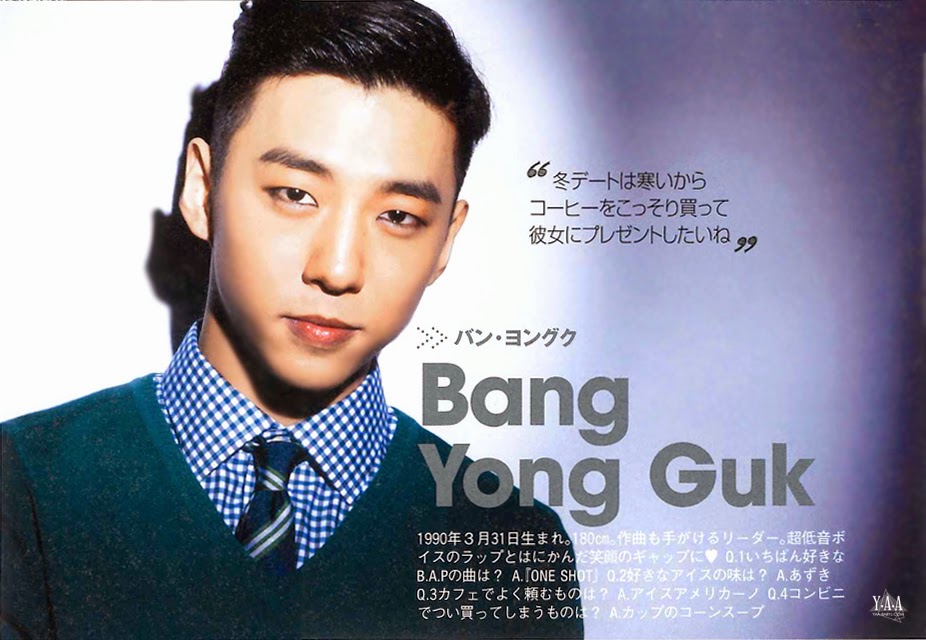 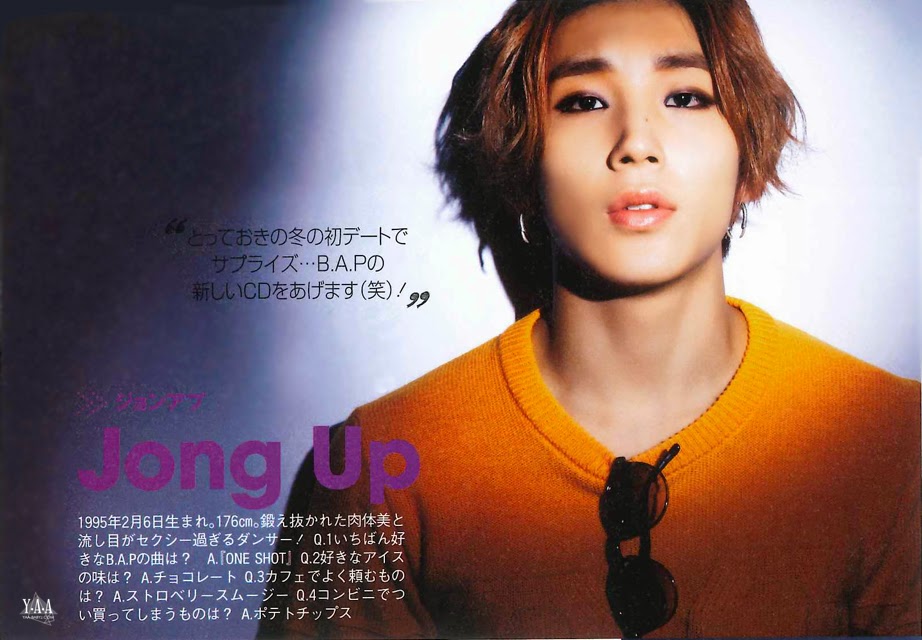 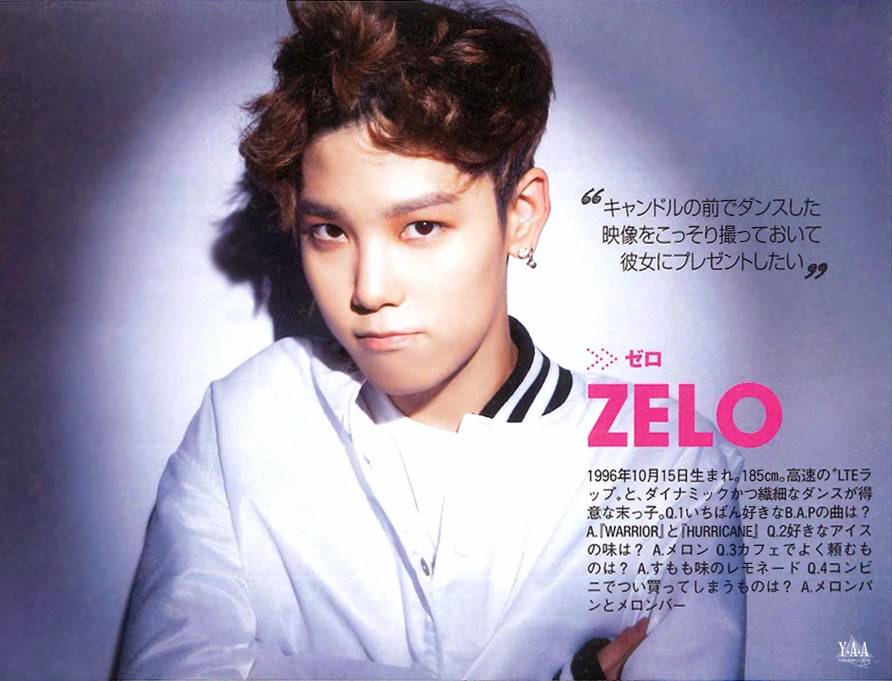 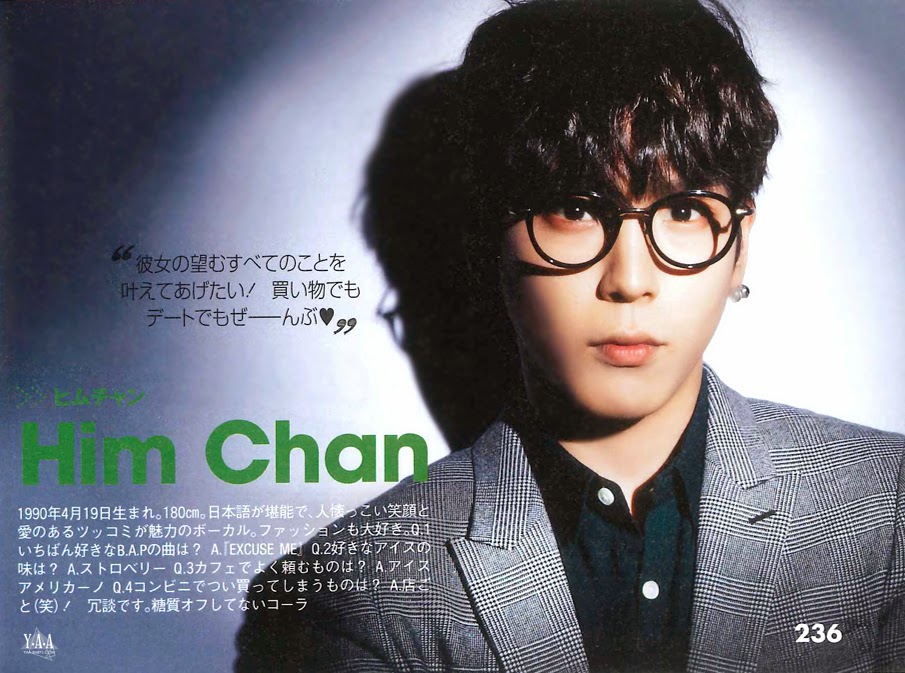 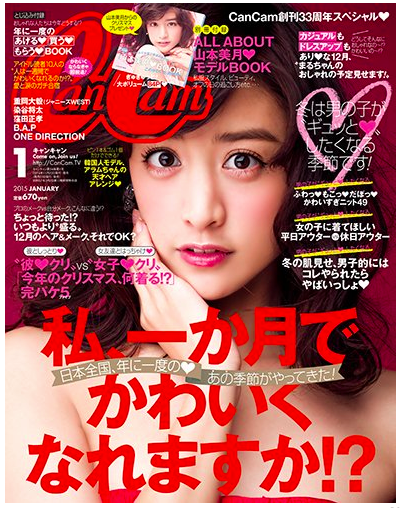