B.A.P, who intoxicates the world with exceptional singing and performance abilities, not only in the K-POP world, but also Japan. After finishing their 4 continental Pacific tour they release their new song “Excuse Me” ahead of 1st year anniversary of their Japan debut and now are holding an event.

I want to spend the special time of our 1st year Japan debut anniversary with our fans.

Important time we spent with fans, the 4 continental tour

They released their single “No Mercy” this past February that reached 2nd on the Oricon Clear chart and attracted fans throughout the world through their 4 continent Pacific tour beginning in March. It has been 2 years since their debut in Korea in 2012 and they are a force that cannot be stopped. 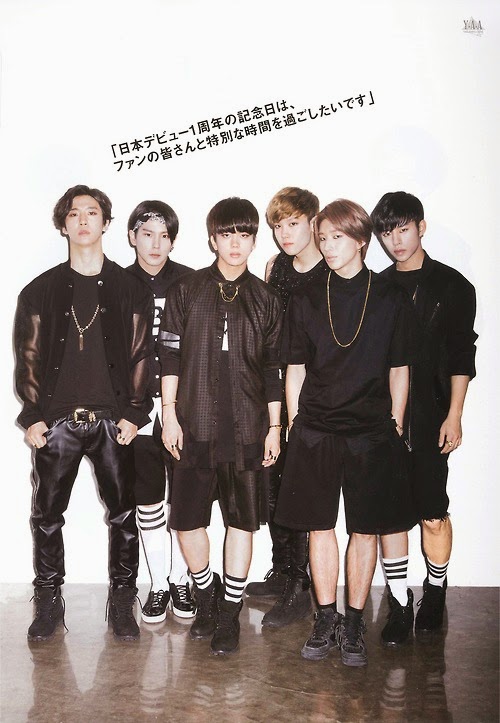 At the last interview Himchan said “I want to do a meaningful concert where once over it leaves something behind.”. Now that the 3 month Pacific tour is over, what do you think you left?

Youngjae: “Of course, I think the most important moment was the time we met the fans. I want to do another tour again soon. I’m overflowing with feelings. I want to do a better tour next time as this time it was shortened.”

Bang Yongguk; “Since we went to many places we have never been before such as Europe, Australia, Chicago, and Los Angeles all of these countries were very impressive!”

Zelo: “The fans were all different depending on the country. In America we had concerts in areas a little away from city centers, but even in those areas there were people cheering for us so we were happy.”

Your last performance of the Japan tour. You intoxicated 8,500 fans at the final performance at Chiba’s Makuhari Messe.

Jongup: “The fans’ cheering became slightly bigger than before and so we were able to enjoy it together.  I was really impressed that everyone was standing and waiting even before the performance started.”

Youngjae: “At the last concert, I went down into the audience. Then I was caught by one fan...(laugh). Joyfully I laughed in spite of myself. It was a place where a lot of people were gathered and so I was worried if someone had gotten hurt or not. However, no one ended up getting hurt, I was relieved. I was very impressed.”

Himchan: “There were fans who were sad and lonely at the tour’s end. I also was overcome with emotion.”

Zelo: “It felt like, compared to our other performances in Japan, a wider range of people of different generations had come. I was surprised that families and elderly people were also there.”

This time you visited many countries for the first time. And yet, I heard when discussing how you would spend your days with the exception of performances everyone unanimously said “Shopping!”

Daehyun: “Everyone really enjoys shopping together (laugh). We went sight seeing and took pictures as souvenirs, but if we had time definitely shopping was main.”

Bang Yongguk: “We went to shops we wanted to go to together didn’t we? We also visited landmarks, and watched people while drinking coffee at coffee shops.

Jongup: “We also went to a local basketball court and played with locals. It was fun (laugh).”

You finished your long overseas tour and again surged ahead releasing “Excuse Me” on September 3rd in Japan. Recorded with your Korean 3rd album, “Badman”, the Japanese version has become extremely popular.

Himchan: “Originally it was a Korean song, but this time we sing in Japanese so that it would be easier for everyone to sing. Since is a an upbeat song let’s all get excited!”

Bang Yongguk: “Our color is lively, it’s a strong hip hop song. Because it was popular at the time of our tour, we decided to make this the title song for out Japanese album. The coupled song “Coffee Shop” is subdued and jazzy, a little different from our strong sound. “Zero” is hip hop and the mood of “Excuse Me” is a little different, like a “mischievous child” song.”

Daehyun: “What you want to listen to in the summer from now is has got to be “Excuse Me” huh? Since it’s the best song to get the crowd going I recommend it for the summer!”

It’s been 10 months since your Japanese debut in autumn of last year. A long yet short time has passed B.A.P. I wonder how these past ten months have been for you.

Daehyun: “These past 10 months allowed us to feel things we had not felt before. Moreover, the time that was most important and significant was when we were allowed to meet many fans.”

ZELO: “I feel like we grew little by little during the tour and concerts. We went to places we had not been to before. By meeting lots of fans of different nationalities we were able to study about different cultures. It was a time where we learned about many different things.”

You have visited Japan many times before. In the past ten months, in the time that you were in Japan, was there something that surprised you about Japanese culture?

Bang Yongguk: “ Croissant taiyaki(Japanese fish-shaped cake filled with red bean paste)! It was covered in sugar and jam-packed with filling. It was really delicious!”

Himchan: “ If we’re talking about food, the most interesting food has to probably be Monjayaki (savory pancake with texture like cheese when cooked) and Gyutan (cow’s tongue) (laugh).”

ZELO: “When we had our handshake event, I was surprised there were a lot of people dressed up as me. “No Mercy”, “Warrior”, the debut era, they were entirely dressed up as me. It was like I was looking at myself. It felt strange.”

Himchan: “Since Zelo’s hairstyles and clothes, are always an unusual style? You can find a lot of people dressing up as Zelo.”

Youngjae: “Since it is our 1st year anniversary I think some sort of special event is possible. Something like a where we consult worries with fans would be nice. We also consult with each other about our worries and troubles. Afterwards,we’ll go shopping? Realistically, it’s probably a little difficult.”

Himchan: “For our 1st year anniversary, not through work, but instead privately, I want to go to Japan with all of the members. We’ll keep it a secret from the company staff (laugh). Only us, we’ll go shopping, sightseeing, and eat a lot of delicious food!”

Bang Yongguk: “For me, of course, since the 1st year anniversary is a special day I want to celebrate it with the fans.”

Youngjae: “With just us, a celebration where we make a coupling would be nice too. A pajama party would also be nice(laugh)”

B.A.P, who spends their days as one of the groups running through the top of the K-POP world and whose private time is anything but scarce, if you walk around town fans will flock and there will be an uproar. If you could spend one day without the prying eyes what would you do?

Daehyun: “I would want to go somewhere like the beach or seaside resort. Since there is a seaside resort by my parents’ house I often went there in the past, but recently I haven’t had any time so I haven’t been able to go......”

Bang Yongguk: “I think I would go back to my parents’ house. It’s been a long time since my family has meet and so I would want to slowly spend some time together with them.”

B.A.P, in the latter half of the years has rose in expectation with events such as the release of your new song “Excuse Me” and events to commemorate your 1st anniversary. Lastly, please send a message to your fans.

Daehyun: “Japanese fans! Since everyone is looking forward to the release of the Japanese version of “Excuse Me”, please anticipate a lot. Moreover, we plan to show you a cooler side of us”

ZELO: “I want to meet everyone soon. From now on we will be doing our best so please give us a lot of support.”

Youngjae: “We’ve been preparing a lot of performances for the September event so that we can interact more with everyone. We want everyone to enjoy the event together and so we intend to make the event as enjoyable as possible.” 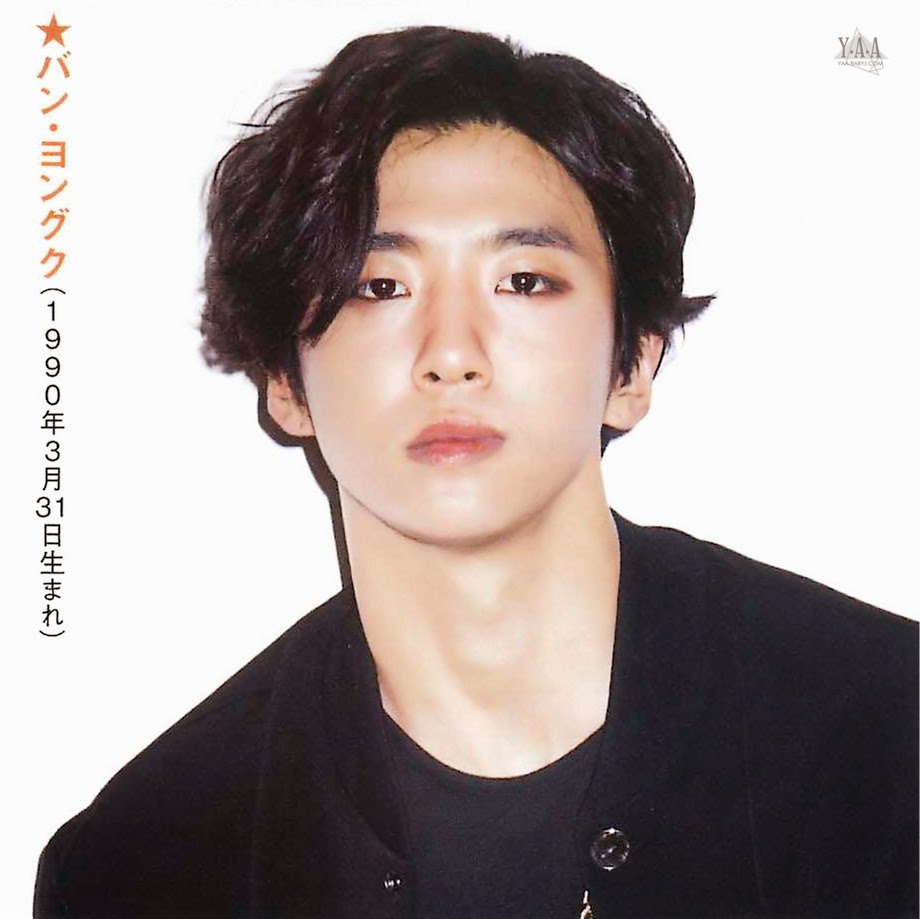 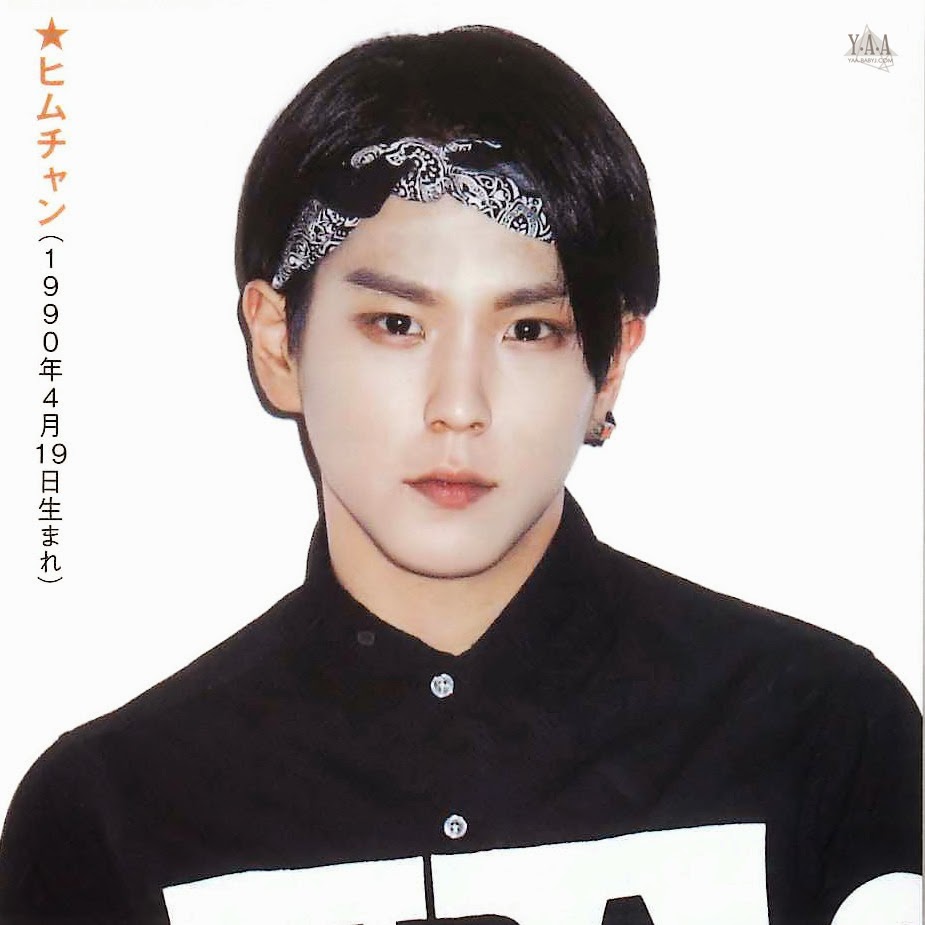 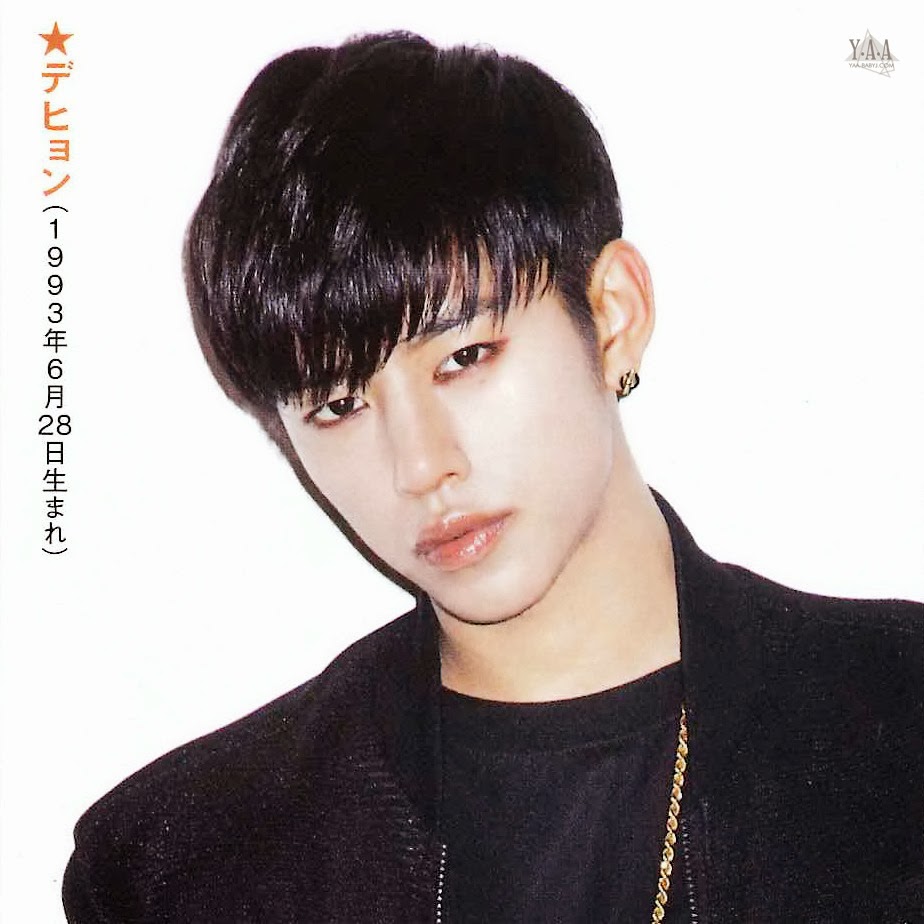 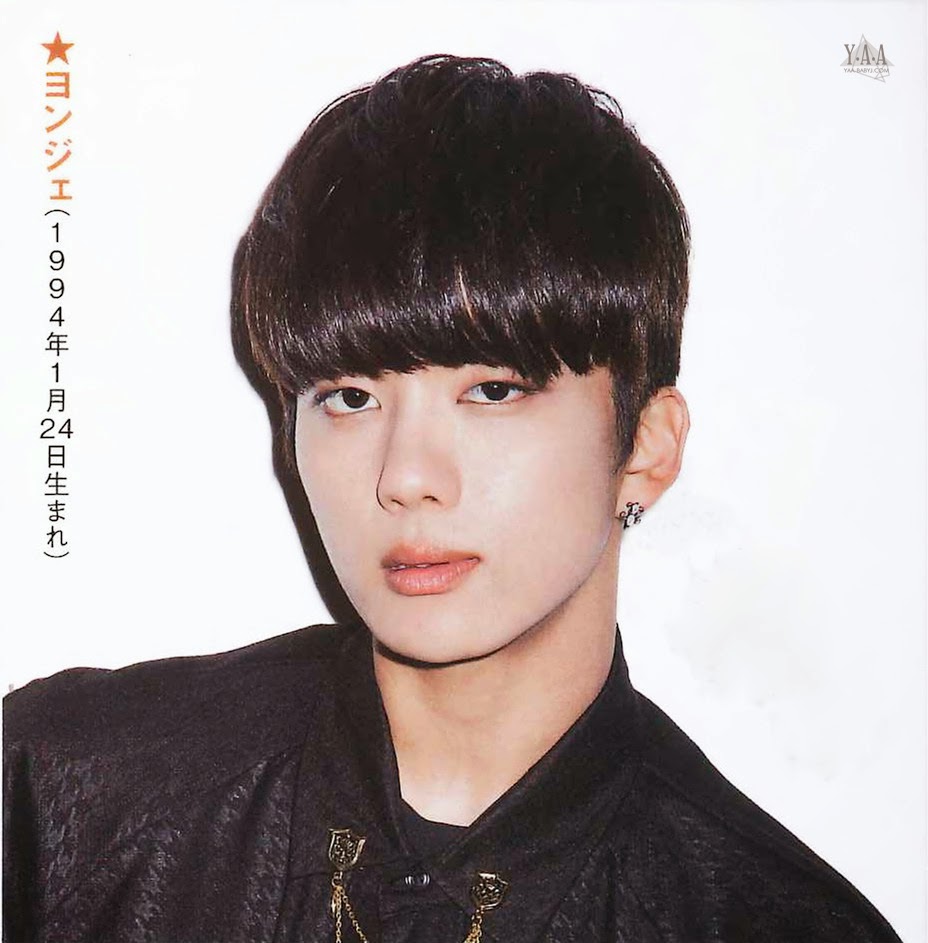 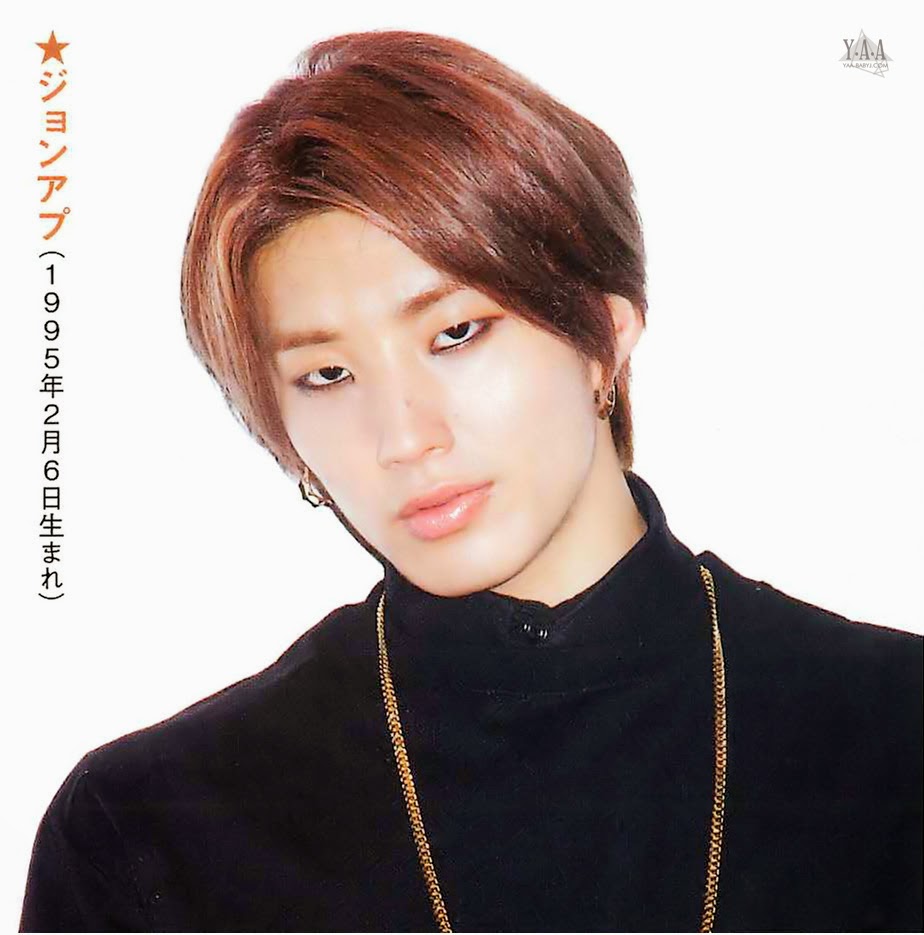 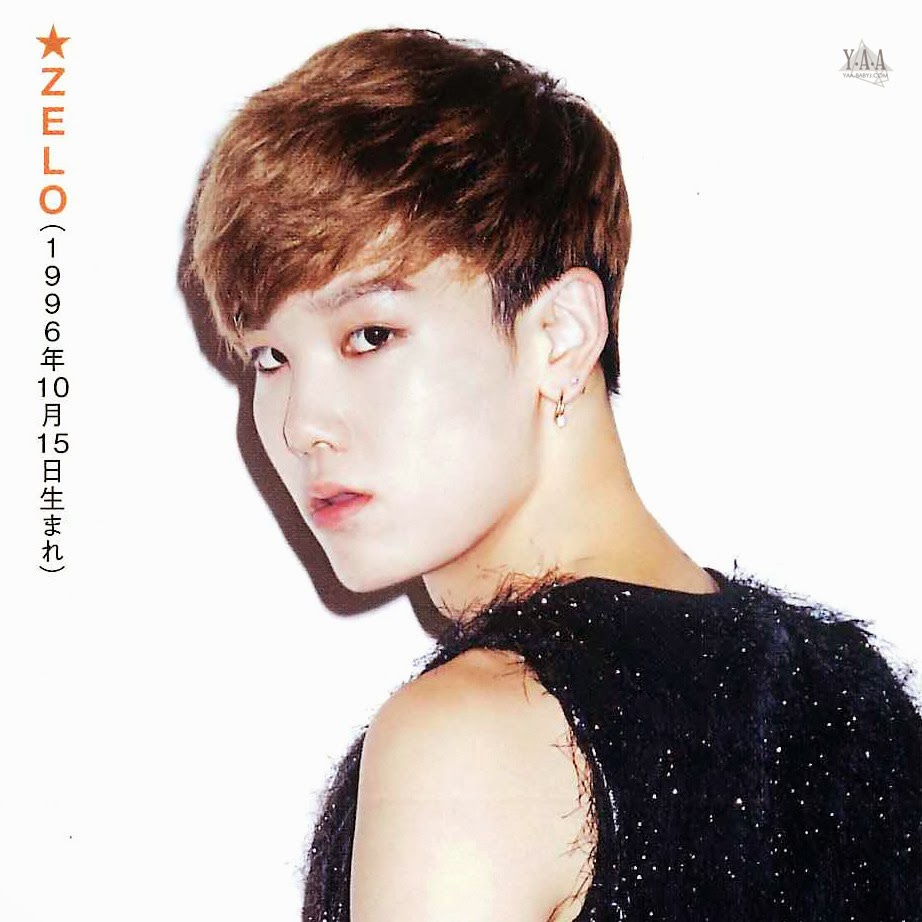 2 Poster Cards for Hallyu Pia, if you join the BOOKぴあ campaign before Sept 1st you can get one.

The issue goes on sale August 22nd. There will be a photo spread and interview for the release of their "Excuse Me" Japanese single, as well as a member signed poster from the issue as a present and chances to win tickets to Sept. 15 Mato Castle event (they have 30 seats in the front row to give away), see the magazine for details. 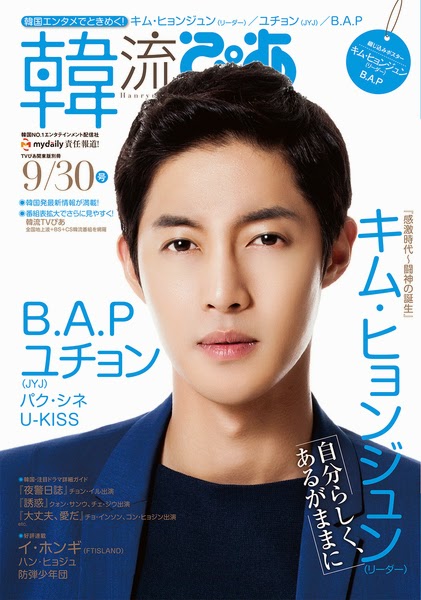