TAKE OUT WITH FULL CREDITS 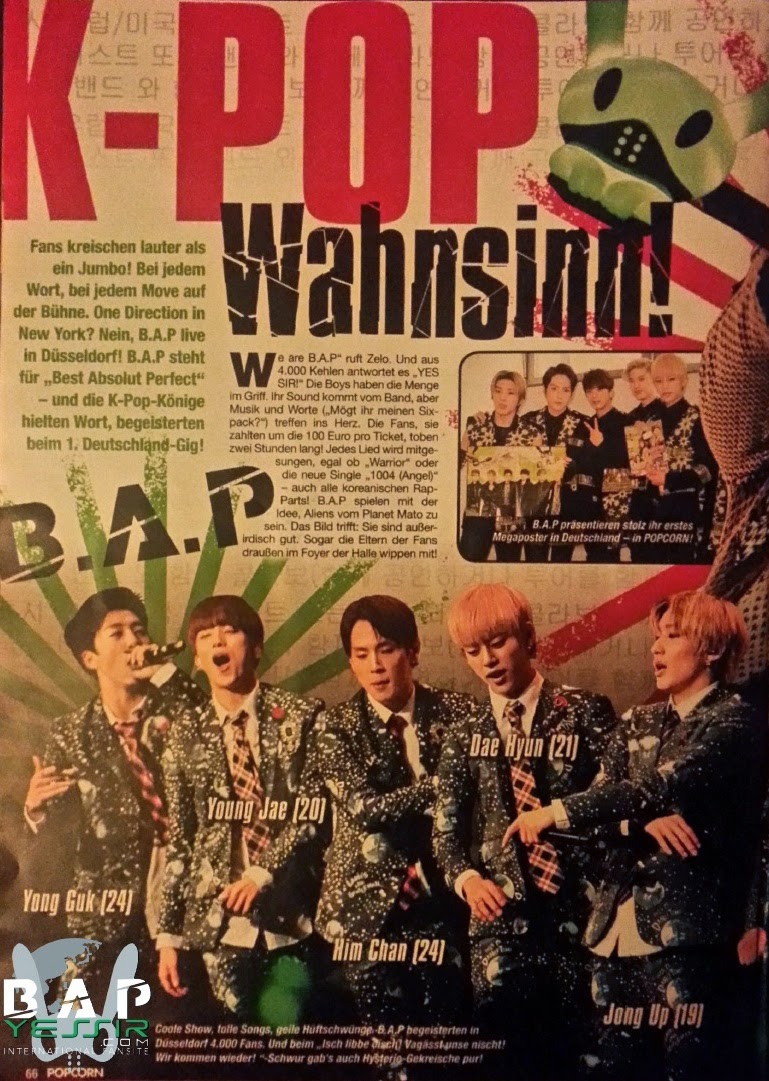 Fans scream lauder than a jumbo jet. With every word, with every move on the stage. One Direction in New York? No, B.A.P live in Düsseldorf! B.A.P stands for „Best Absolute Perfect“ - and the K-pop-Kings were true to their words, they wowed during their first gig in Germany!

Zelo shouts „We are B.A.P“. And you can hear 4.000 voices answer „YES SIR!“. The boys got the crowd under control. Their sound comes from tape [*meaning there is no band playing live] but music and words („Do you like my Sixpack?“) pierce to the heart. The fans, which paid about 110 € for a ticket, party along for 2 hours! They sing every song, no matter if its „Warrior“ or the new single „1004 (Angel)“ - even all Korean rap parts! B.A.P dally with the idea that they are from planet Mato. That picture matches: They are too good to be from this world. Even the parents of the fans that are waiting in the lobby area bob along to the beat!

B.A.P proudly present their first Megaposter in Germany – in POPCORN!

Cool show, great songs, hot swinging of the hips. B.A.P pleased 4.000 fans in Düsseldorf. And the vows „I love you! Don't forget about us! We'll come back“ [*all written in a way they cutely pronounced it; like „I lobe you“ instead of „I love you“] caused hysteric screams! 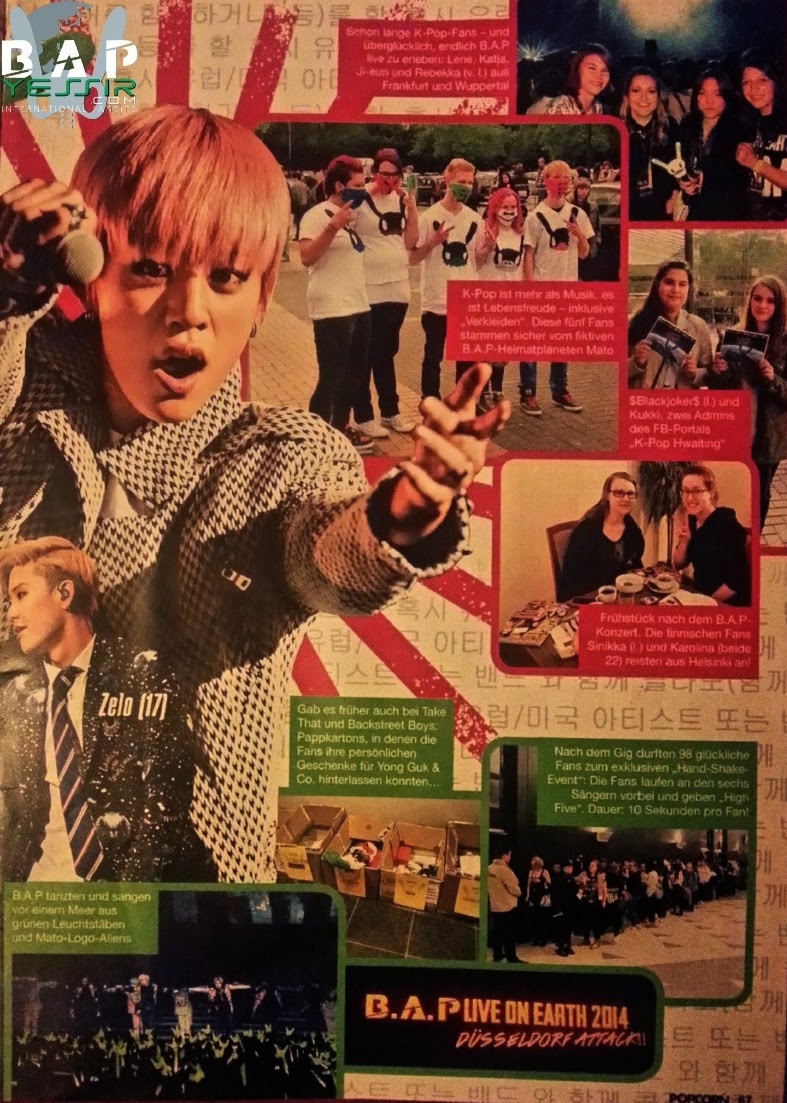 K-pop fans since a long time – and they are more than happy to finally see B.A.P live. Lene, Katja, Ji-eun and Rebekka from Frankfurt and Wuppertal.

K-pop is more than music, it's zest for life – including „dressing up“. These five fans sure are from B.A.P's fictional home planet Mato too.

$Blackjokers§ and Kukki, two admins of the FB-site „K-pop Hwaiting“
Breakfast after the B.A.P concert. The Finnish fans Sinikka and Karolina (both 22) came from Helsinki.

After the gig 98 lucky fans were allowed to go to the exclusive „Hand-Shake-Event“. The fans walk past the six singers and give them a „High Five“. Duration: 10 seconds per fan.

Back then you also had such for Take That and Backstreet Boys. Cardboard boxes in which the fans can put their personal presents for Yong Guk & Co....

B.A.P danced and sang infront of an ocean of green lightsticks and Mato-logo-aliens 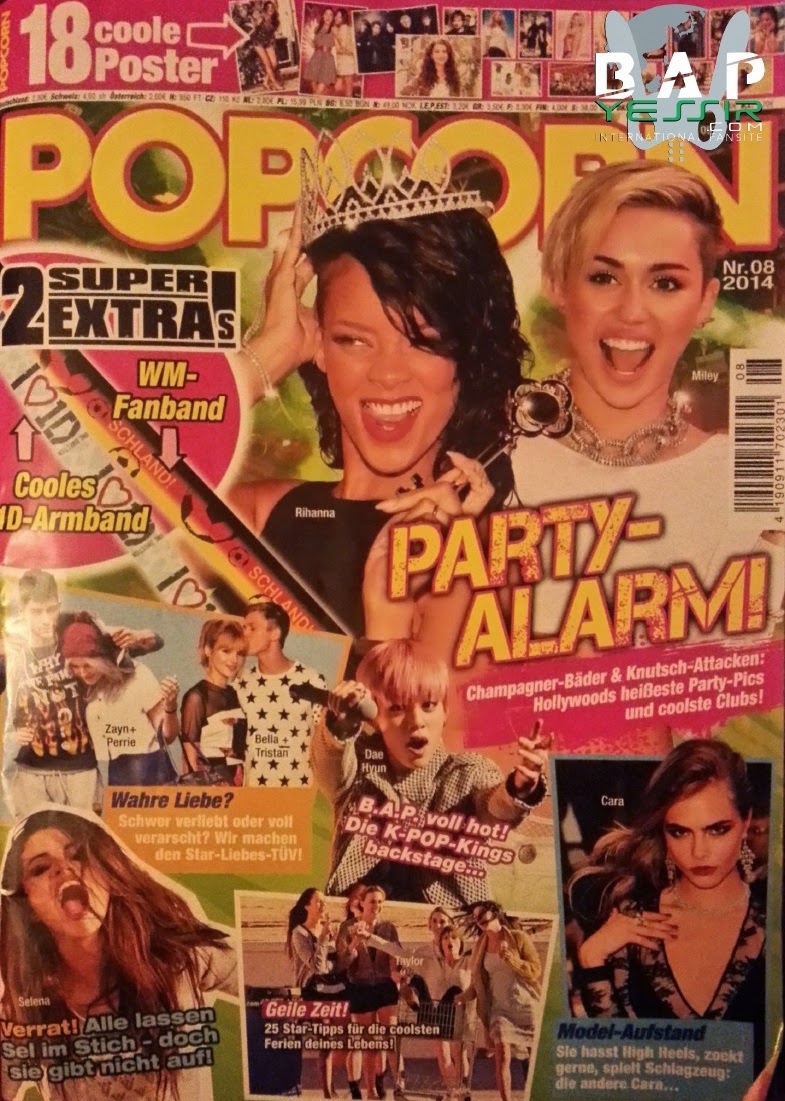