Winner of the album has been announced!
Thank you to the 1200+ participants, and stay tuned for another giveaway!

To celebrate the release of B.A.P's fourth single album and the continent tour going to an end, we'll do another giveaway!

Our giveaway will also help to promote B.A.P's new single since every participants will be trending infos about it on their networks. See how you can contribute to B.A.P's success HERE.

How to participate:
☆ Chances to win 1 copy of #BAP new album #UNPLUGGED2014 and 10 set of members photocards on WWW.BAPYESSIR.COM ☆ 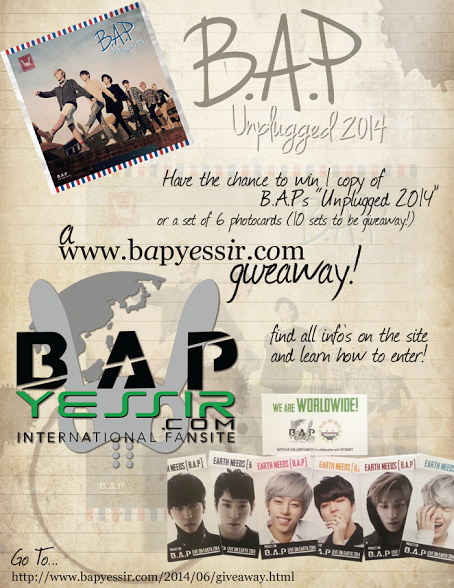 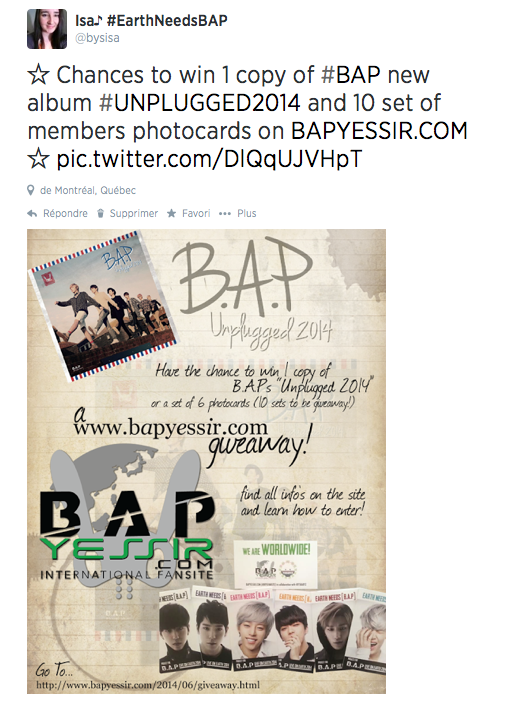 If the form doesn't appear, please click this [LINK].


YOU CAN SHARE THE GIVEAWAY'S INFOS/POSTER ON YOUR SNS AS MANY TIMES AS YOU WANT, BUT ONLY FILL OUT THE FORM ONCE.
Winners will be announced starting June 10th through the site and our social networks!
If you have any questions, please ask on ask.fm/bysfansite, via bysfansite@gmail.com or mention @bysisa

Email ThisBlogThis!Share to TwitterShare to FacebookShare to Pinterest
Tags bys:giveaway