Nicole from BYS will be at Nagoya Day 2 with BYS flag project! 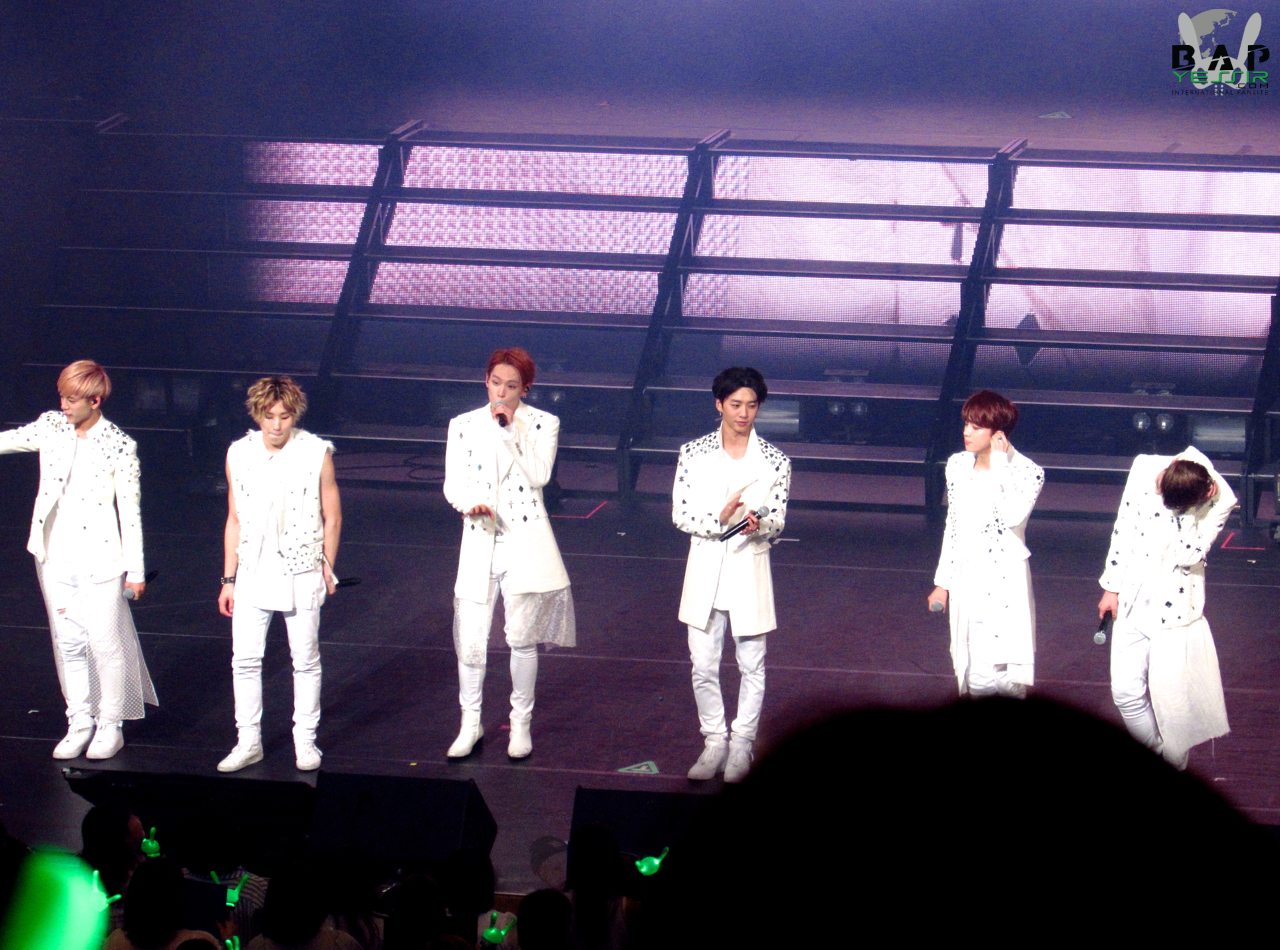 Hi everyone, this is BYS Co-manager/Japanese translator Nicole, and here's my fanaccount with pictures below of LOE Nagoya Day 1 ^^

Firstly, the security at the venue was very strict once inside; they only glanced in our bags, but inside the staff continuously walked around, and stared down the crowd.

First Impressions
This was my first LOE 2014 show this year, and I’d avoided fan accounts of other LOE shows as much as I could since I didn’t want to spoil myself too much. So here are some things that struck me first off:

* They looked pretty tired T^T Obviously, they were, they had their crazy Brazil>Paris>Korea>Japan flights the same day as this concert, and they gave it their all but there were moments where you could see them show their exhaustion.
* THAT BEING SAID, this was still an AMAZING show, they put all their energy into their performance and it was so much fun to watch.
* I really, really, REALLY like the opening/videos for this tour. I’m sorry but the “Warrior Begins” opening and some videos were just….awkward with the medieval elements combined with the outer space elements….BUT I LOVE this tour’s “B.A.P”/UFO opening, and the “What is Love” Matoki part (I CRIED LAUGHING It’s so cute), and all the video breaks are great, and the Horse mask/“Check On” dance tutorial is A M A Z I N G.
* I’m sorry I had a bit of trouble understanding their talk breaks today because a.) They mumbled a bit sometimes and at times seemed unsure of what they were saying, and b.) They were acting like such dorks speaking in weird voices and repeating the same phrases over and over again and giggling with each other~
* The members kept coming very close to the edge of the stage, which made for a lot of crotch shots on screen since they were so close to the cameras, Himchan kept trying to move the members back during talk breaks.
* The crowd today was a bit quiet? The music was REALLY loud today, a lot of Babys I talked to after said the same thing, that their ears hurt a bit since the volume was up so much, so that was one reason you couldn’t hear fan chants that well, but I still thought we were a bit too quiet, especially since I think we should have cheered louder considering they literally just landed in Japan that day and must have been so jet lagged and could have done with the extra support from us (so I just yelled more and embarrassed myself, sorry to everyone around me ;_;)
* I was so happy to see these songs live for the first time: Save Me, Check On, Body & Soul (CRIES)
* ….but “Body & Soul” though…I laughed because the crowd all knew what was coming, like everyone started screaming before B.A.P even got down for their air hip thrusting and kept screaming the rest of the song.
* My favourite performances (mostly because they are my favourite songs) were: One Shot, Power, Excuse Me, 1004,

Yongguk
* HIS ENGLISH ♡ He did the “The World has changed” intro in English and they had the Japanese subtitles on screen behind him, but his voice and everything was just perfect.
* As always for shows in Japan, during the talk breaks Yongguk sort of retreats into his own little world and lets the other members talk. He still tried speaking a bit though.
* During one song I think Yongguk yelled “Music make me High~” but I’m not sure…
* For “Hurricane,” like he did in Fukuoka, he replaced “Tokyo” with “Nagoya” ♡
* My first impression when they came out for “One Shot” was that he looked pretty tired T^T It may have just been the lighting and I think all the members had a bit much makeup on this day, but his eyes seemed pretty worn out.
* Do NOT watch Bang Yongguk during “Body & Soul” if you wish to remain sane….His body waves should be illegal, and he really needs to not run his hand all over his body/through his hair like that (; w ;)
* He got really fired up for “Bang x2,” like his whole face changed and he just gave it everything he had.
* So for “Crash”, Yongguk also went offstage and walked through the aisles. There was a hug, but I’m not sure if it was Yongguk hugging a noona fan or if the noon fan lunged at him lol sorry I was on the balcony this day so all I can say is there was a hug haha. Yongguk also got a Tigger during this song.

Himchan
* He was doing some Secret “Poison”-esque crotch dance during one song (I can’t remember which one sorry), and the camera was on him, and when he noticed he made this adorably frustrating “Oh ho~!” smirk into the camera.
* I think Himchan was also quite tired just judging by his Japanese today; He was fine talking, but often sort of seemed at a loss of what to say, and I felt bad because during one talk break, the music started up and cut him off and he just looked like “well ok then” and got ready to perform again.
* Himchan’s “Tweet” at the end of the show was something like “I’m handsome Himchan (lol) I love you”
* Himchan was actually the one who said he was hungry lol, he said “peko peko” and that he wanted to eat Nagoya chicken wings.
* Himchan...body waves for Body & Soul...I just....

Daehyun
* HIS VOICE. How many times can you say Daehyun’s voice is incredible, but it really, truly is. His high notes were spot on and he just rocked all his parts.
* Daehyun’s Japanese is getting better, but his personality just makes his speaking so much better, like at one point Himchan was saying something like “Let’s go!/Can you do it!?” but sort of stopped and looked confused at Dae, but Daehyun just said the same thing in a super loud voice with a smile, like he didn’t care if it was correct language or not, he just wanted to fire up the crowd ♡
* Daehyun is fearless, no joke. There were no guardrails or gates to keep fans back, but he STILL went off stage to walk through the aisles while security was trying to fend off the excited Babys crowding him as he walked around during “Crash.”
* He pretended to slap Yongguk’s butt during “Spy” but he was like feet away and it looked so funny.
* Daehyun said he wanted to eat Nagoya Miso Katsu and like groaned like he was starving haha.
* He did so many smouldering, sexy stares into the crowd/camera I nearly died... Youngjae
* His ankle seemed fine, I heard that he injured it and seemed to be in pain for the LOE Fukuoka shows, but as far as I could tell he seemed fine.
* He was using his "cute" voice calling "Himchan~" and just being silly during MC breaks.
* He was so sassy and silly again today~ He kept teasing Himchan, and he sort of sassed Jongup during StarBabys time saying that Jongup’s pronunciation of “Coffee” sounded like “Copy” and corrected him ^^;;
* He was so silly when they were talking about Nagoya’s famous foods (Tebasaki = chicken wings and Miso katsu = pork cutlet with miso sauce), him and Himchan just kept yelling “NANI GA UMAI” (What’s good?!) in weird deep voices and were laughing so hard like dorks while we were like “What are you guys doing~” haha
* Youngjae filmed the crowd during “Crash.”
* His “tweet” at the end was something like “Are Nagoya Babys really this cute~”
* Dae sang a few lines a cappella of “Where are you” but we couldn’t sing along so Youngjae was like “Ok, no one knows the lyrics yet~~~~” and they moved on lol. Jongup
* CUITE. Haha sorry but he is so shy and sweet, his Japanese pronunciation (of the selection of about 10 words they usually have him say haha) is actually improving in my opinion, but he still seems so shy and it’s adorable.
* HIS SOLO. His shirt came unbuttoned so we could catch glances of tummy but he didn’t strip for this show…But we also got so many flashes of skin when he did his flips and his shirt flew up
* His singing was SO INCREDIBLE. His voice was so clear and sweet and he could do high notes so well, I was so impressed by him.
* He did his silly “Do you wanna drink a coffee~” To the tune of “Do You wanna Build a snowman”  and gave out a juice lol
* They were introducing Junhong as the tallest member, but Youngjae said “The tallest in the world must be Moon Jongup!” then sort of slouched and looked up at Jongup comparing their heights (it sounds mean but it was very cute and they were all smiling haha).
* At one point he was in the back with Junhong and they were both goofing off with their backup dancers.

Junhong
* When did Baby Maknae become a man T^T lol. Really though, his dancing was perfect, and he is such a tease with his Japanese:
(During StarBabys Cafe time) Z: Where’s my girlfriend~? [looks around at the Babys by the stage] Where is my girlfriend~?
(During an MC break near the end) Z: Do you like me? Do you like me? DO YOU LIKE ME? I love you~♡
* At one point it seemed like he either forgot what to say in Japanese or Himchan interrupted him, but he laughed and looked confused.
* Daehyun like wiped Junhong’s arm after Junhong wiped his face with a towel and Babys just yelled and the 2 of them sort of giggled. Dae and the rest of them sort of kept pushing/shuffling Zelo around during one of the talk breaks before Youngjae or Himchan (can’t remember who sorry) yelled “YOU ARE IN THE WAY” haha.

Unfortunately, that’s all I can remember. I should have finished this fan account right after the concert, but I was so tired since I literally arrived at the venue 15 minutes before the show started, and had left right after work so I was so worn out. But I will be going to Nagoya Day 2 so please look forward to a (hopefully!) longer and more detailed fan account! [PHOTOS]
Sorry these are not better quality, like I said security was really strict so I took most of these super fast so some are very blurry, plus I was in the 2nd balcony so very far from the stage, sorry T-T 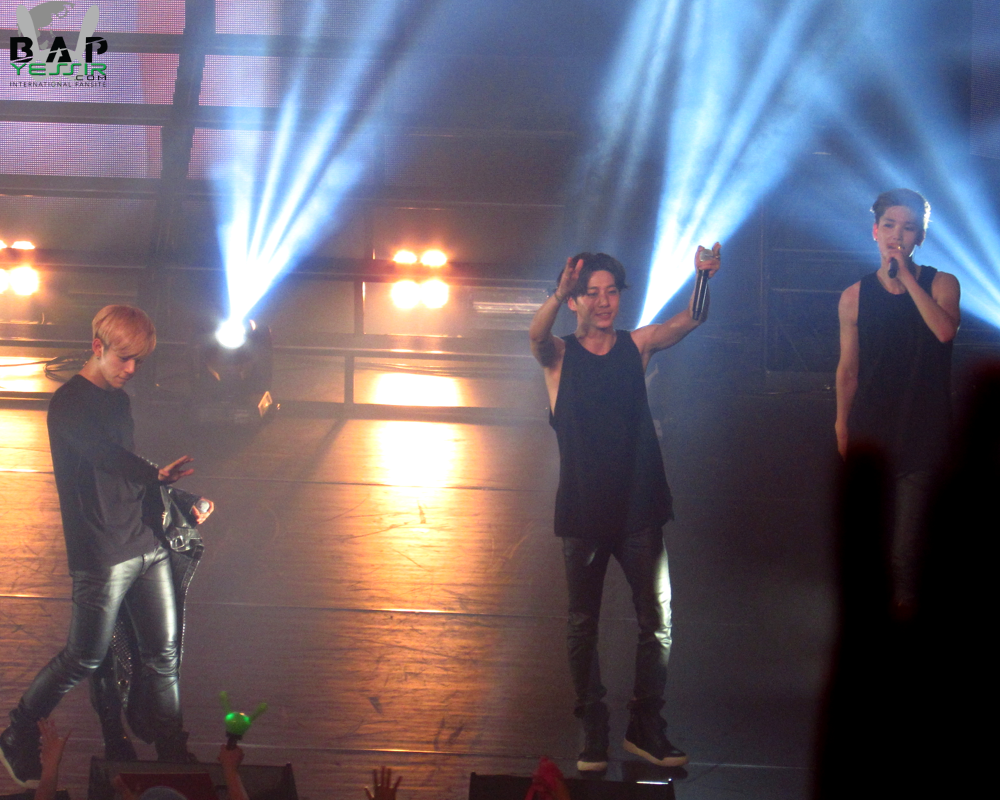 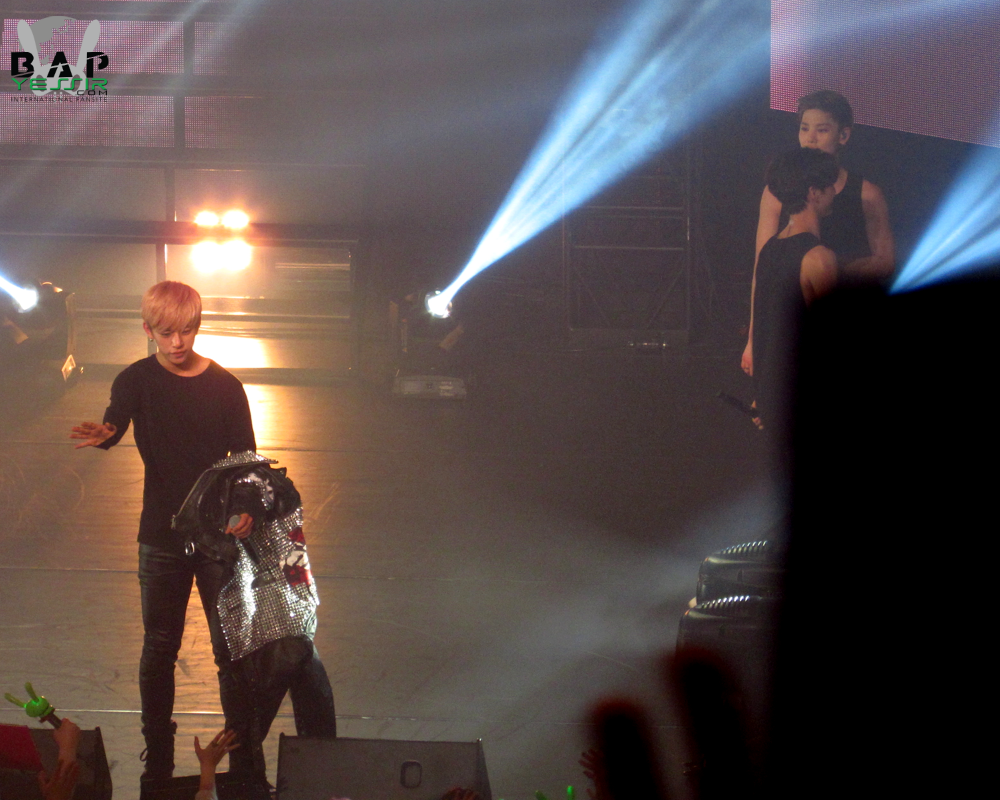 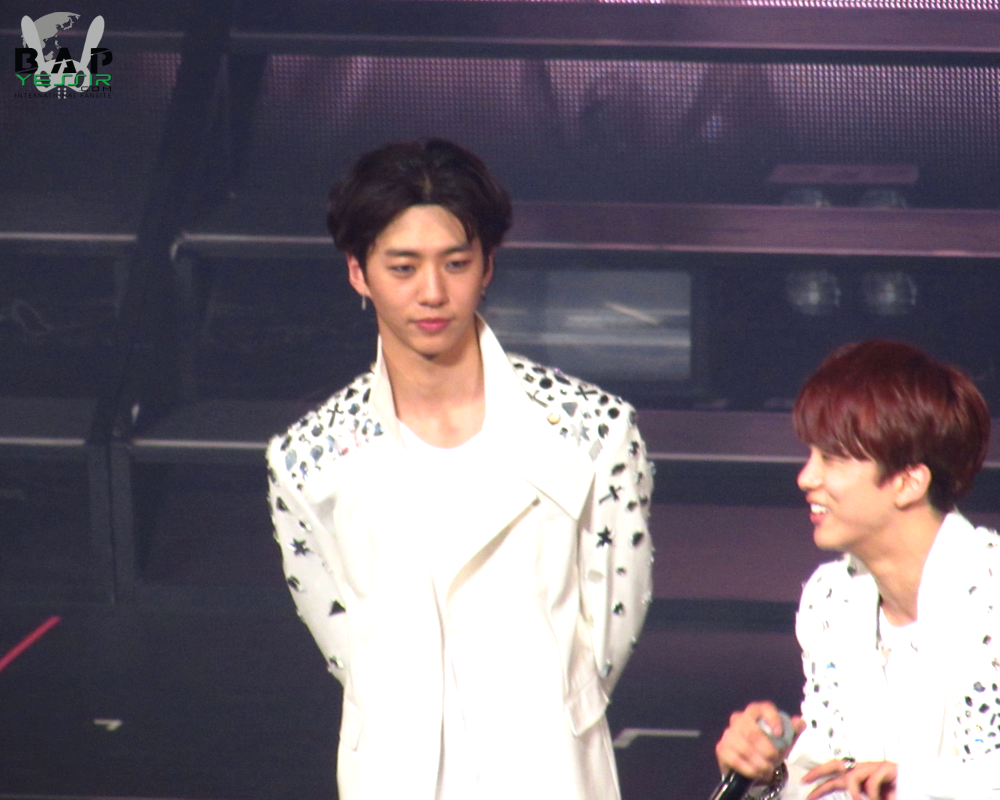 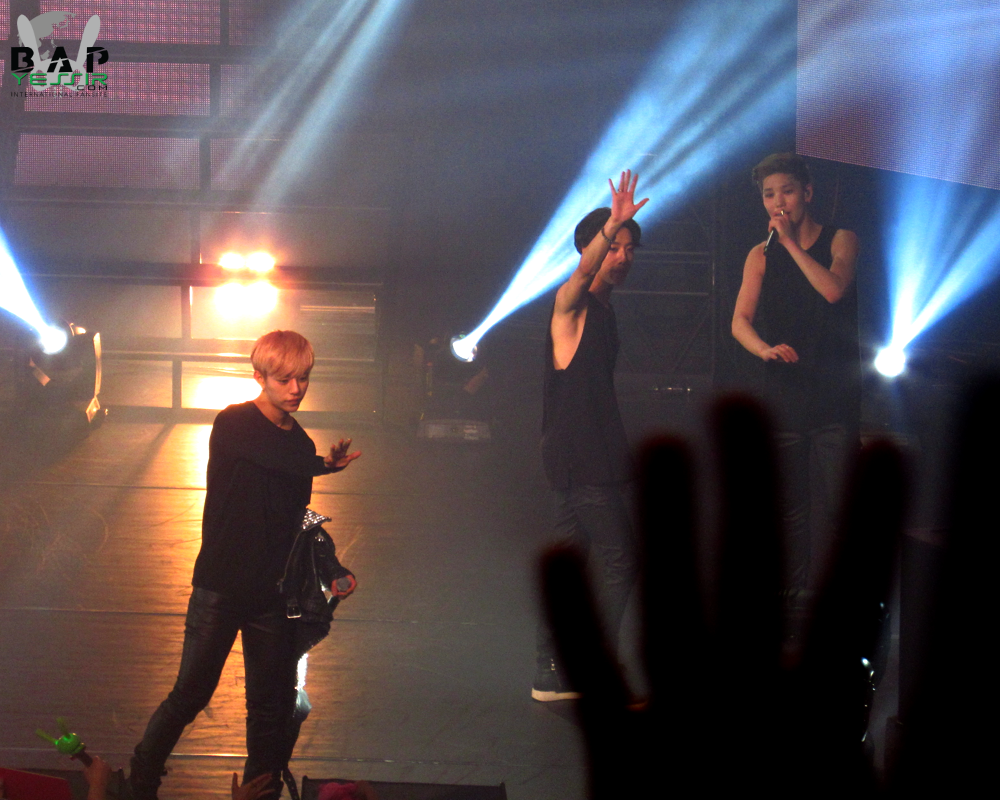 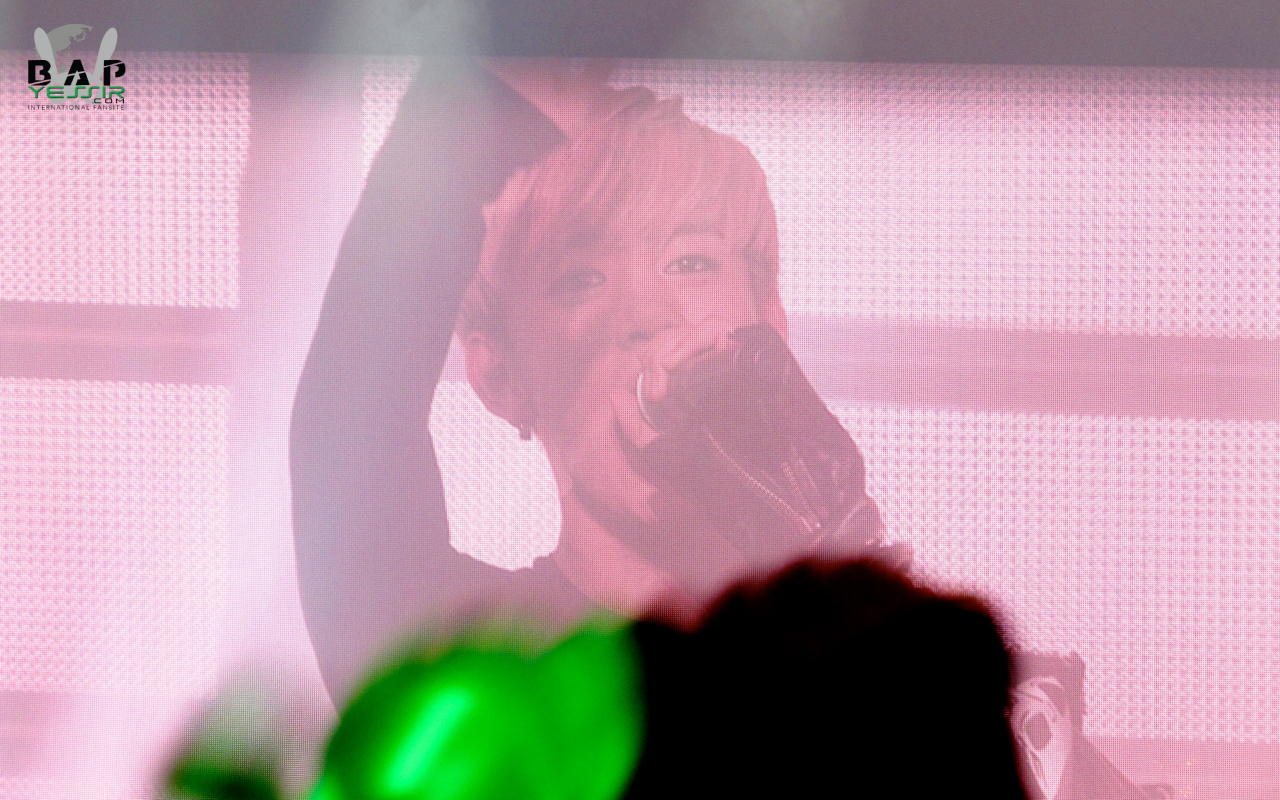 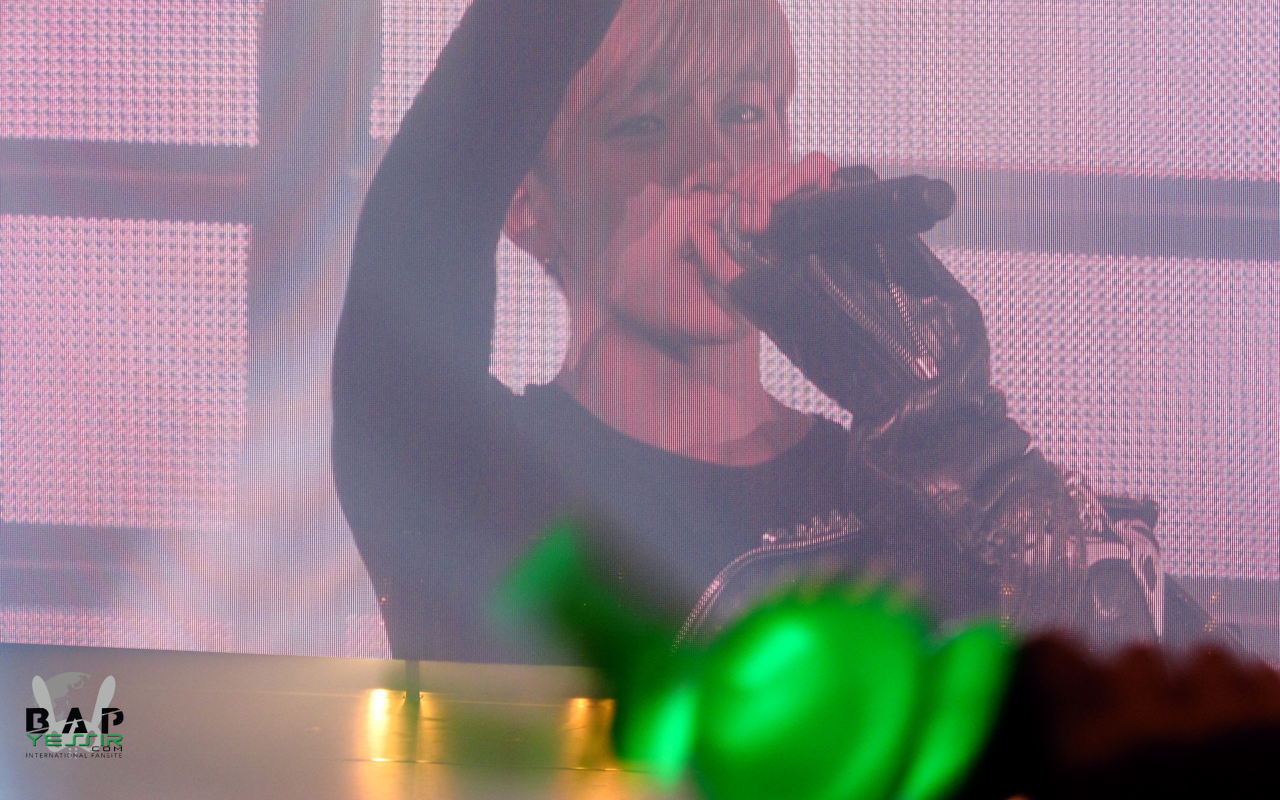 Sorry Himchan, I couldn't catch all of your handsomeness on camera T^T He looked tired in most of the pics I took I wish this wasn't so blurry... This one too T^T 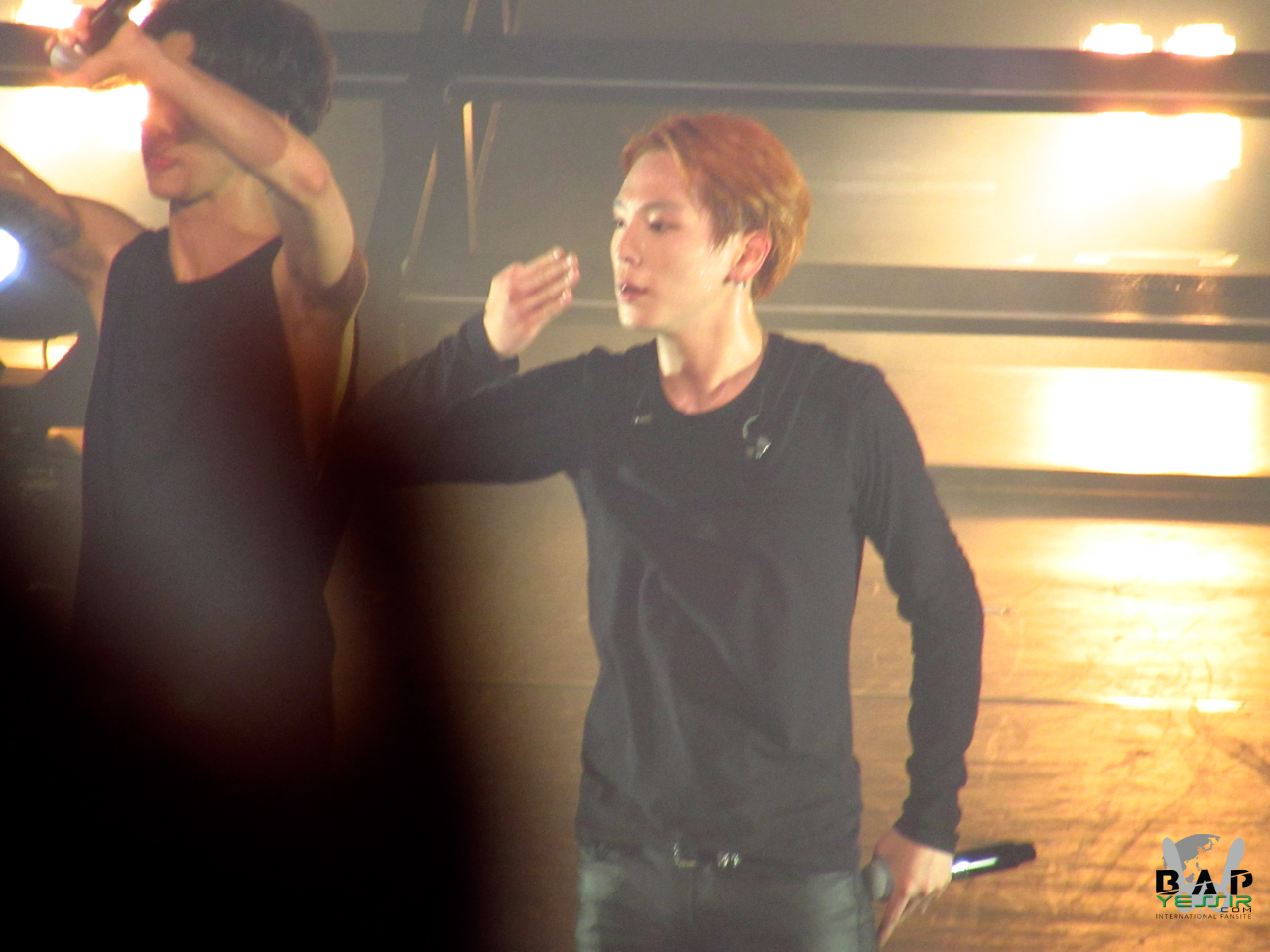 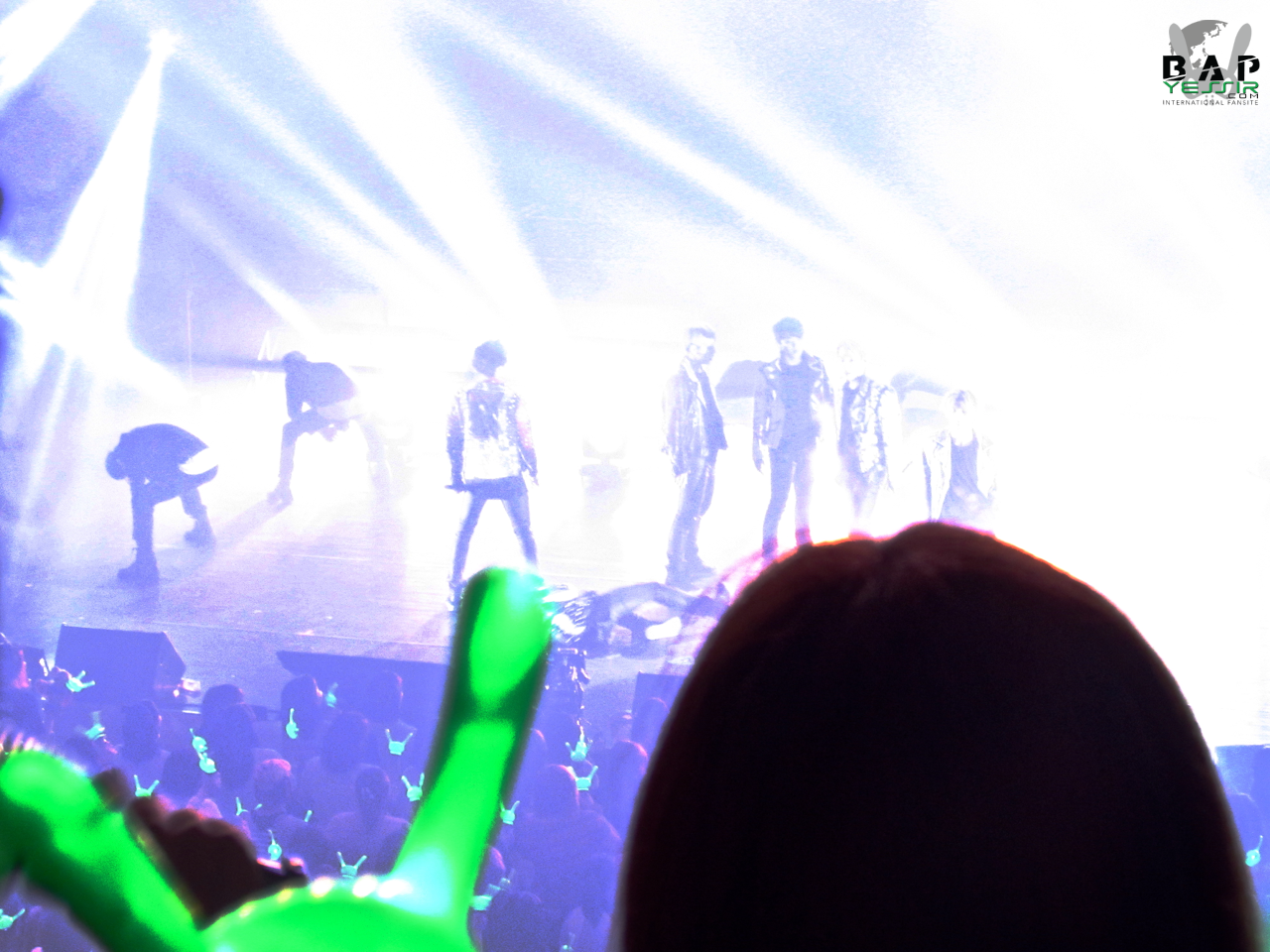 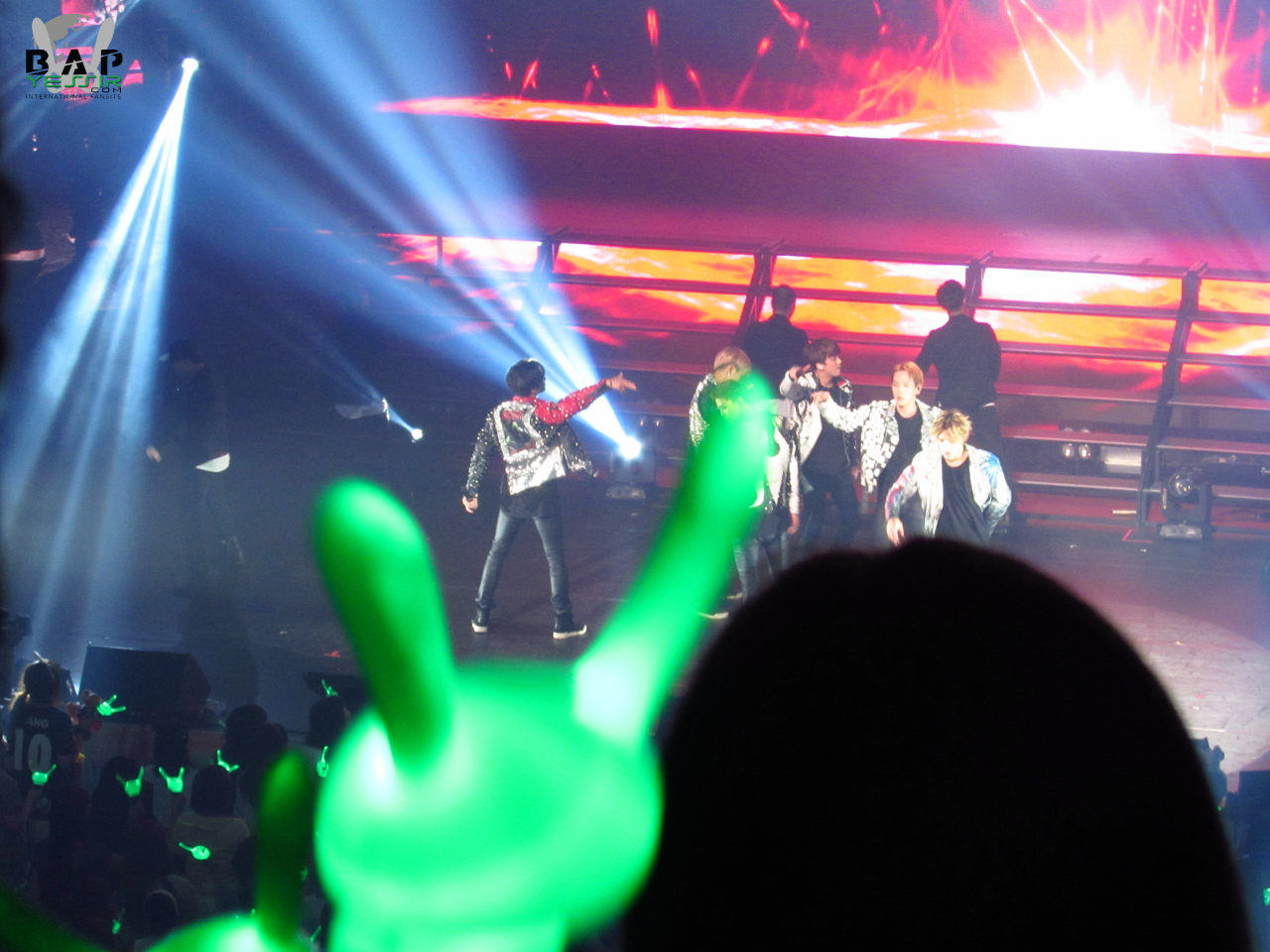 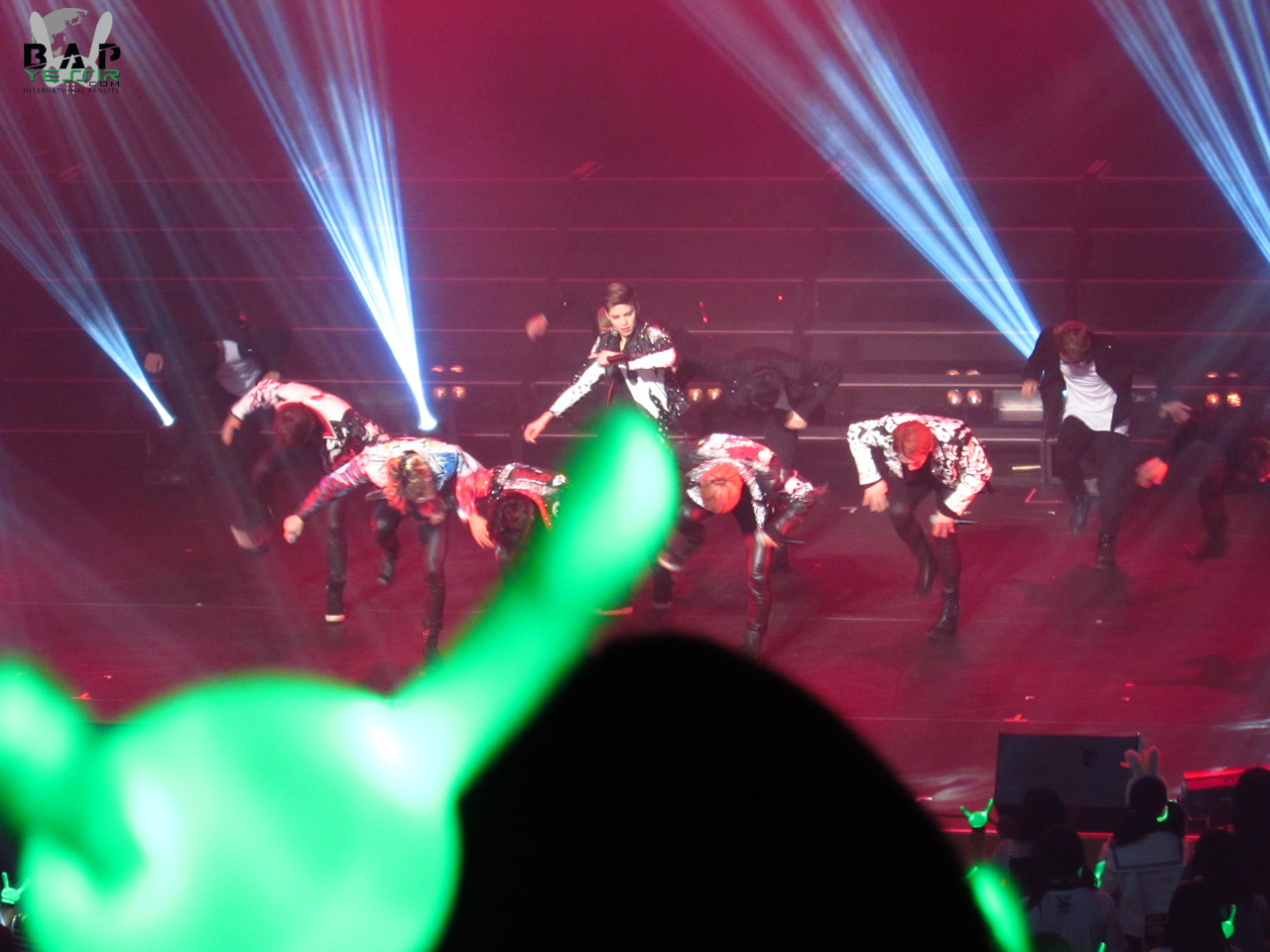 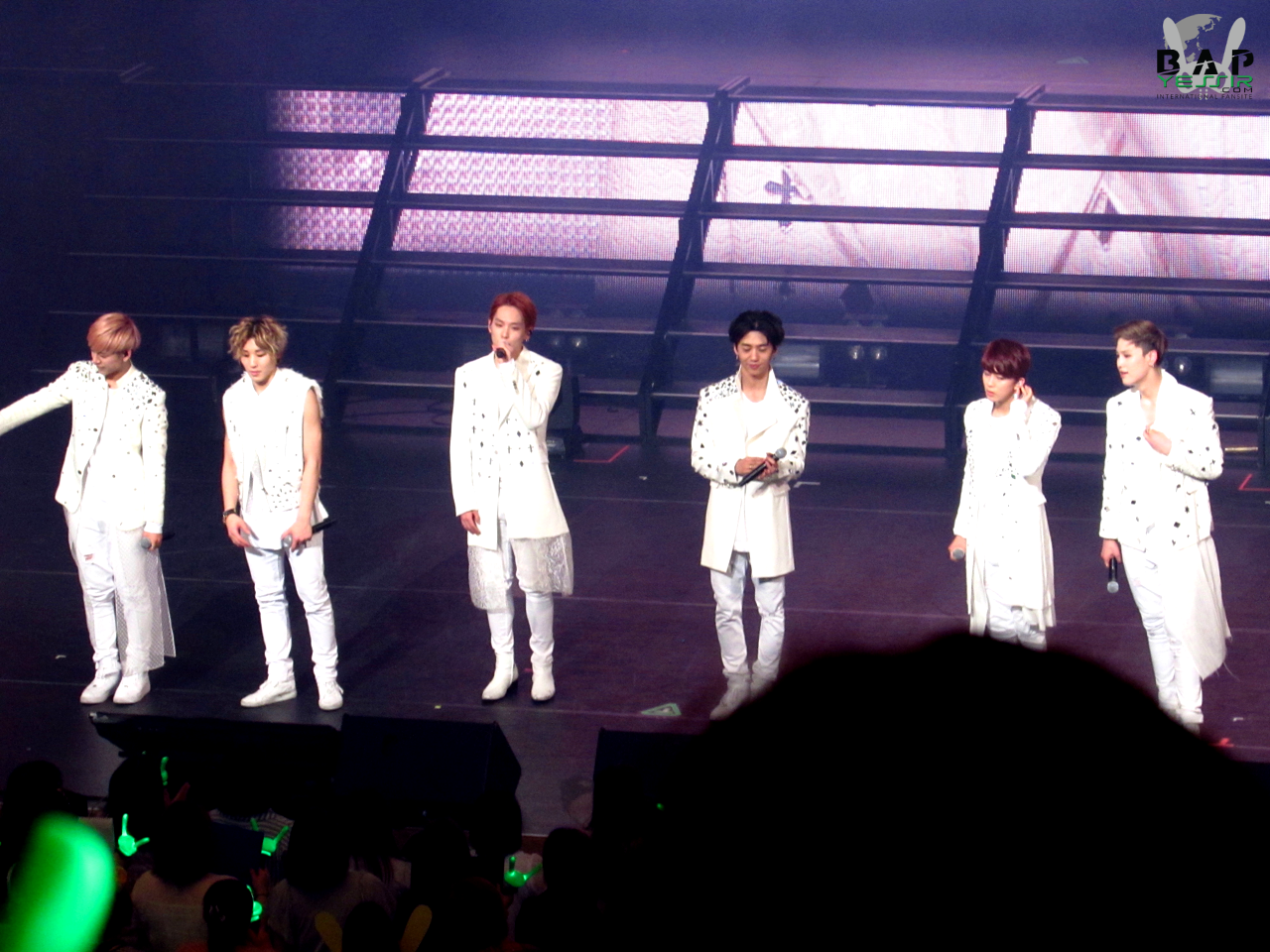 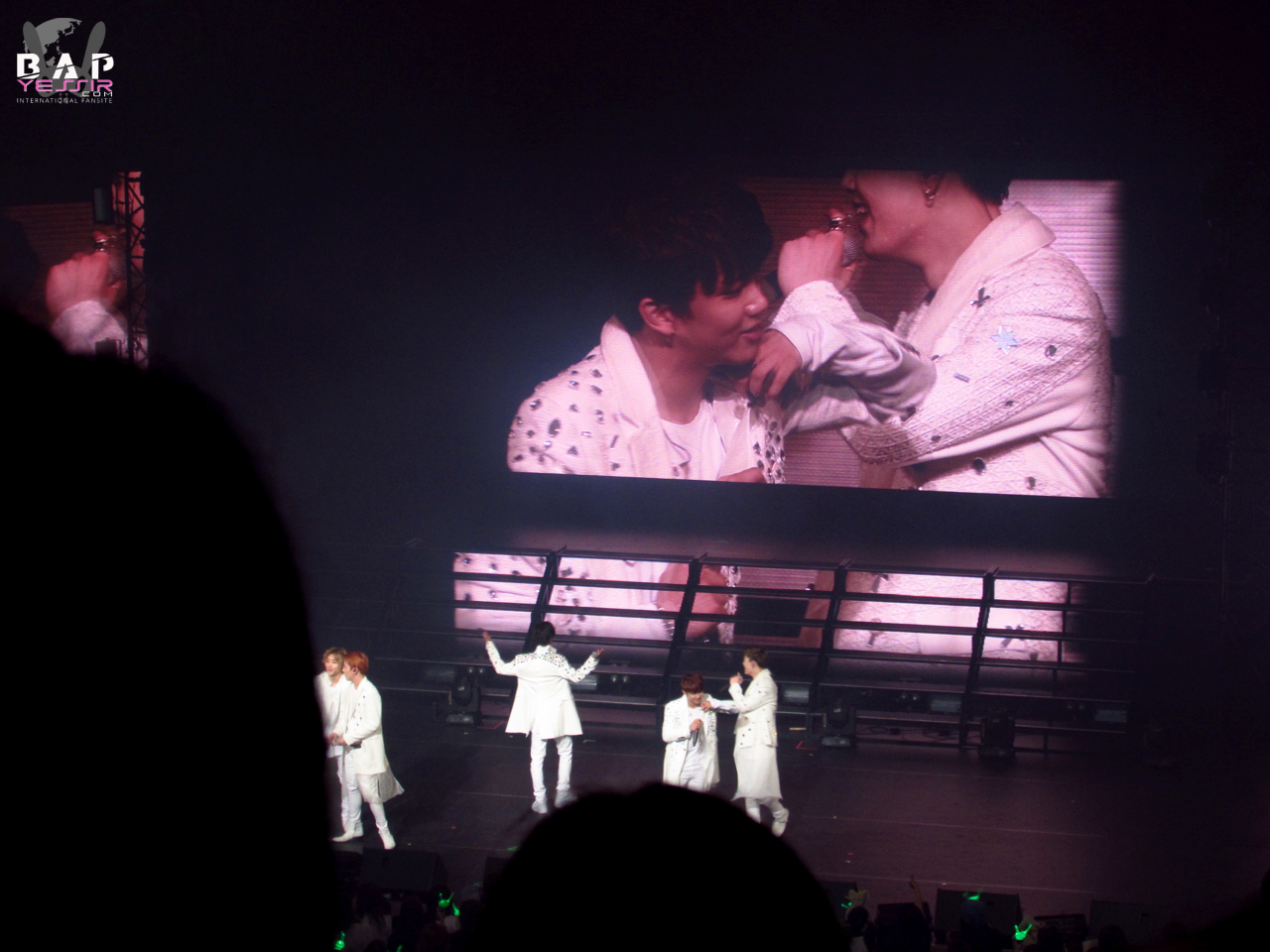 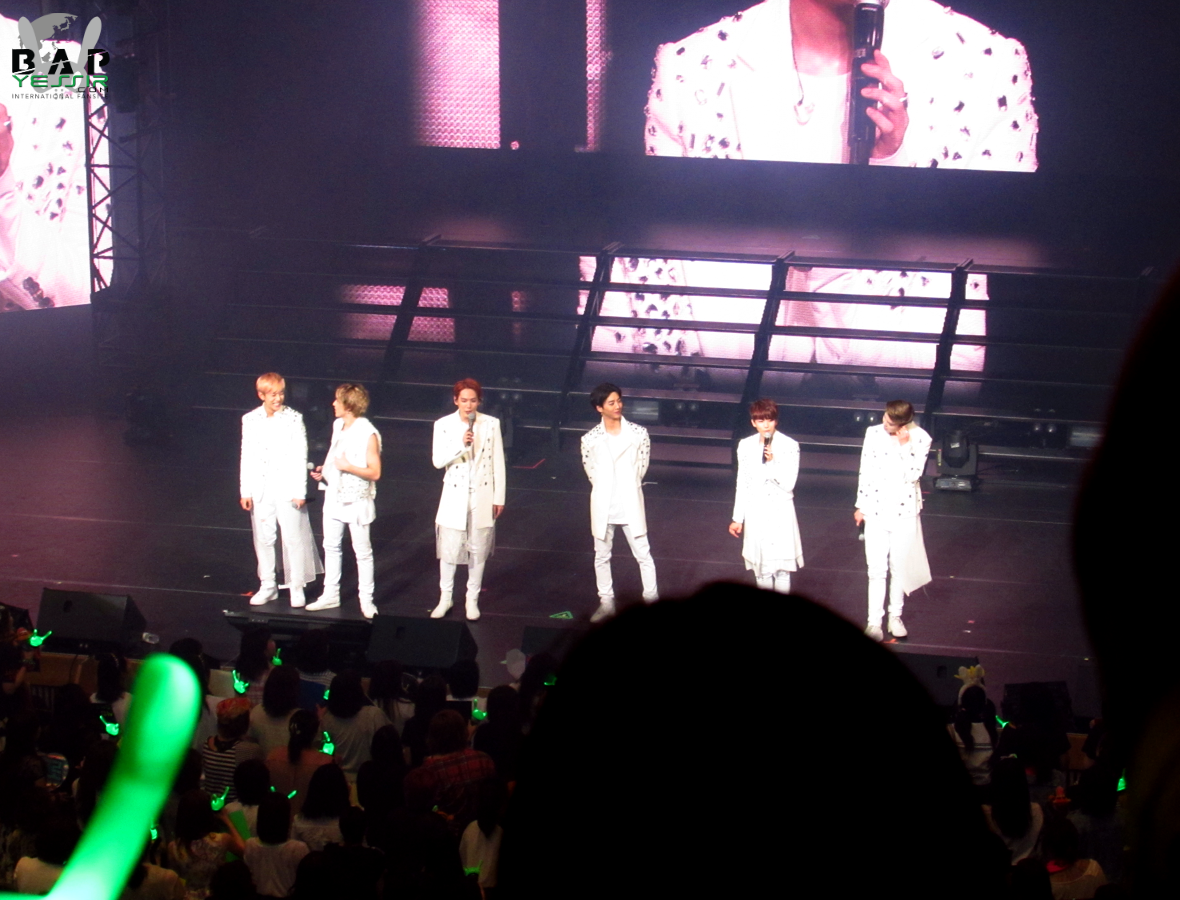