[Afternoon song] B.A.P, were these hip-hop warriors always this cute…’Where are you? What are you doing?’ [OSEN=Lee Hye Rin Reporter] The hip-hop warriors we thought who expressed their anger for the world’s absurdity, are actually sweet boys.
In the afternoon on June 3rd, B.A.P released their sweet acoustic song ‘Where are you? What are you doing?’ showcasing their sweet vocals and showing their “boyfriend” concept. 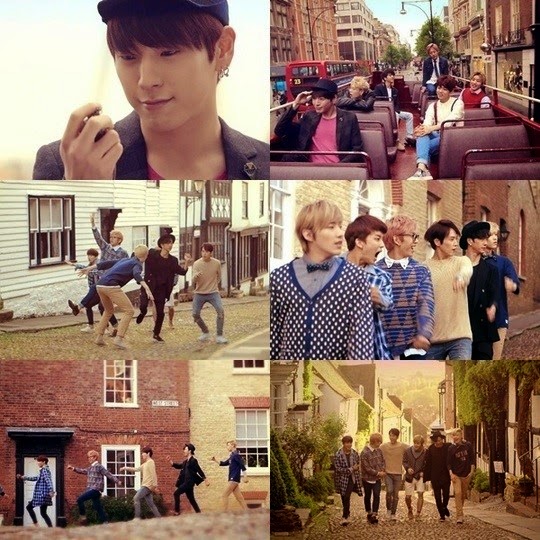 They’ve been gone for so long because of their continent tour, they thought they would surprise their Korean BABYs. The members constantly use these words “Where are you? What are you doing?” in their daily lives. The warm sound of the guitar allows the song to have a kindlier approach to.
The music video is sweeter. In the music video they used London as their scenery and showed the member’s playful side as they walked down the streets and drank coffee, showcasing their charms. The music video is shot as if they were actually someone’s boyfriends. Though they’ve always done performances with heavy makeup, their no-makeup faces were just as lovely.
Ever since their debut, B.A.P has showcased strong music and heavy messages that express their personal thoughts, however, through this ‘present’ their will show new
styles and colors. Their music and styling has changed, which shows off their cooperation with their production team.
They’ve caught girls with their strong music, but now are ‘pushing and pulling/playing around’ with their fans feelings through this new single album. With their tours in America, Europe, Oceania, and their Taiwan concert on the 18th, B.A.P will start touring around the countries in Asia. They will be touring around Japan for four days. They will start in Hokuohka, then Nagoya, Osaka and Sendai and will end their Asian tour with 8 concerts in total.