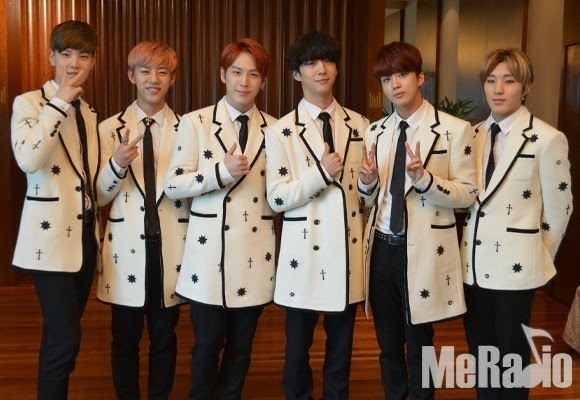 B.A.P were back in Singapore for their B.A.P Live On Earth 2014 Singapore concert last Saturday (May 31) and we met the charming sextet for an exclusive 1-on-1 interview prior, where they shared about their favourite place on Earth as well as stepping up to the challenge to film a self-video.

Having once again titled their tour Live On Earth, we were curious as too which were the member’s favourite place on Earth. After jokingly saying that their favourite place on Earth was … “Earth”, the members shared that they like Busan because of the lovely beaches like Haeundae and Gwangalli Beach. Not to be missed is also the fresh raw seafood, which tastes really good.

Bang Yong Guk wants us to give him a call?

The group also previously revealed in our earlier email interview that they would consider forming new sub-units like Moon & Zelo. With their senior Hyosung from SECRET having just released her solo debut album, we asked the boy band if they would like to make their solo debuts as well.

As if to reassure fans that B.A.P is here to stay, leader Yongguk quickly responded saying, “Currently, six of us are working together as B.A.P and we want to focus more on that in terms of music and our performances.”

However, he did add that if the opportunity arose, they would definitely consider the possibilities of releasing solo materials as well as new sub-units. Well, given the band’s track record of constantly pushing out new material, most recently with their Unplugged album, we hardly thing there’s time for the sextet to work on their solo debuts.

Yongguk had also previously expressed his interest in collaborating with Pharrell Williams to create music that B.A.P has yet to try. We thus asked him if there were any Asian artistes or perhaps even Singaporean ones in which he’d like to work with.

The 24-year-old replied that there are too many talented artistes in Asia for him to pinpoint an individual singer he’d like to work with. “Everybody is talented and I want to gain more experience working with a lot of musicians,” he shared.

When further probed on possible genres he’d like to dabble in, Yong Guk said that B.A.P has tried many different styles of music so far and they don’t want to confine themselves to a specific genre. “I hope to try as many as possible so please give me a call when you’re interested,” he said, flashing the hand sign for calling and smiling sheepishly. (He flashed the hand sign again as the translator spoke to us, sending chuckles round the room.) 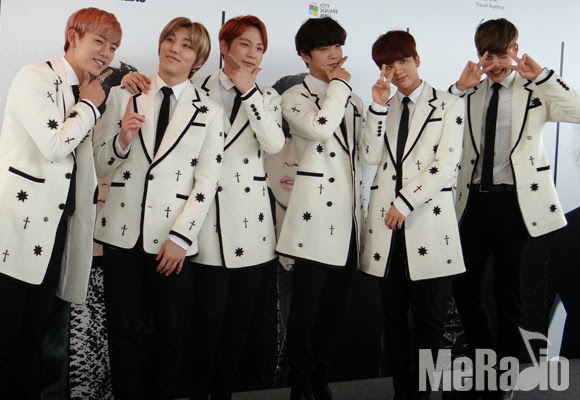 B.A.P joins in on the World Cup fever!

It’s just a week from the 2014 World Cup and the six-member band are definitely getting in on the World Cup fever. The members shared that they are definitely rooting for their home team South Korea and are sure that they would perform well in the upcoming games. The boy band also wanted to personally express their support towards the team’s current manager Hong Myung-Bo.

Sensing that there might be some big fan-boying going on because of the members' looks towards Himchan, we asked him if he had gotten an autograph with Kuen-Ho.

Smiling gleefully, Himchan replied that he would be very happy if he received an autograph and added, “There are a lot of young players and players that have been around for a long time [in the current team]. I support everybody and the future of football in Korea is looking very bright. Regardless of the score or outcome in the games, we will always pledge our support to the team.” 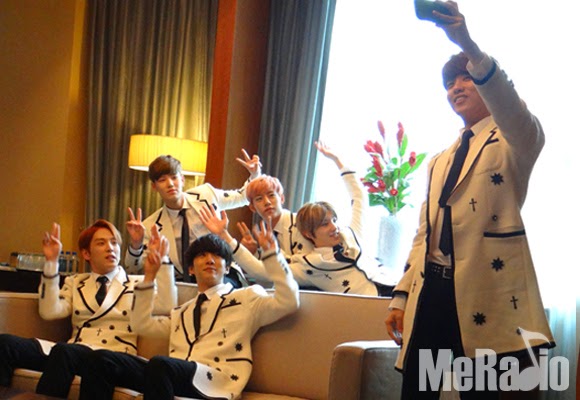 It’s all about the chilli crab

The craze over taking selfies has swept the Internet by storm and was recently re-fuelled by the Chainsmokers’ song ‘#SELFIE’. We upped the challenge for B.A.P and got them to take a self-video instead.

Not one to shy away from challenges, Youngjae quickly stepped up to the plate and took our phone, turning the camera towards them and signalled the count-off for their impromptu self-video.

(Youngjae might have cut himself out of the video but we’re sure the boys would perfect the self-vid taking skill in no time at all.)

B.A.P further showed their love for chilli crab during their interview with 987TV as well, where they randomly injected the “chilli crab dance” into the interview whenever they could.

MeRadio is proud to be the official Music Portal for B.A.P Live on Earth 2014 Singapore. 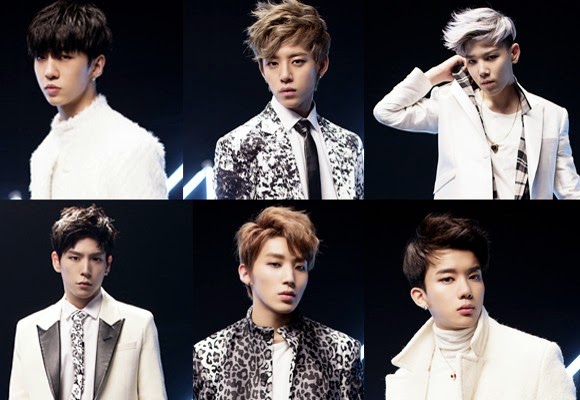 Just 2 weeks more to B.A.P Live On Earth 2014 Singapore happening on 31 May. After sharing about their thoughts of forming sub-units and what to expect from the concert, we bring you part two of the e-mail interview with the sextet; where they revealed more about their first full-length album First Sensibility, and more insights as to who is the most angelic member in the group.

A smile that will “melt your stress away”

The South Korean boy band released their first full-length album two years after their debut and First Sensibility was received with much fanfare. With the album title in mind, we were curious as to which member was the most sensible.

Leader Bang Yong Guk said, “Most of our performances are very charismatic and tough; although we are quite sensitive and emotional offstage. If I have to pick the most delicate member, it would be Him Chan. He enjoys communicating with people via SNS (social networking services) and often writes some letters to fans at the fan cafe. You can see how much he cares about people around him. He's very outgoing and honest and he knows how to express himself. I envy him sometimes, haha!”

Lead vocalist Dae Hyun added that fellow lead vocalist Young Jae is also a sensible one. “He's very calm, organized, and you can see that he thinks and talks very logically. That might make you think of him as a sort of a cold person. But if you get to know him in person, Young Jae is very sensible and caring. He knows how to control himself but also when to loosen up,” shared the 20-year-old.

Given that their title track is ‘1004 (Angel)’, we also asked the group which member was most like an angel, to which Him Chan said, “I must say Jong Up! Everybody calls him ‘Moon 1004(Angel)’. He’s got that something special that even when we have a long day full of promotions scheduled, he never pulls a long face and takes care of the other members, even the big brothers. He always smiles and that melts all our stress away. Jong Up listens carefully to other people and shows how much he concentrates on your story. That's what people love about him! Isn't he a true angel of B.A.P?”

Well, from Him Chan’s description of Jong Up off-stage, we definitely agree that he is possibly an angel in disguise.

Shedding away the tough boy image

The group also seems to have taken a step away from their tough image, where they often sang about social issues, adopting a more mature image.

Main dancer Jong Up shared that since First Sensibility is the first record from B.A.P, they have to show how they’ve grown as artistes; but above all that, they want to connect with fans and share what they feel.

The 19-year-old added, “We know it's a big change for us, but all of us were quite sure about what we're going to do. B.A.P has worked very hard to showcase our versatility. This new album has crossed all different genres on top of hip-hop. We'd like audiences to enjoy all the various colours that we have on our palette. We hope that we'll become a good artist who influences people's lives with positive and better music.” 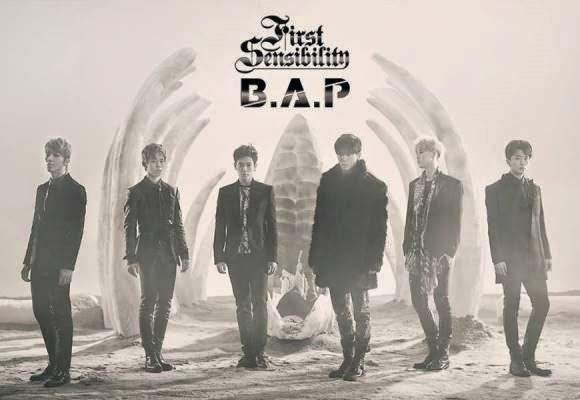 Will there be another B.A.P album this year?

When B.A.P first debuted in 2012, the group produced up to five songs. Last year, B.A.P returned with two EPs, One Shot and BADMAN; with a record of churning out fresh music constantly, we asked them if fans could expect more new material before the end of the year.

Yong Guk revealed that he hasn’t stopped working on new songs even when they are busy with their album promotions. He further shared that he would often stay up in the middle of the night or wake up earlier to write songs as there’s very limited spare time while they’re having their promotional activities.

The leader also added that touring the world and meeting new people also helps to give him inspiration, with the fans love and cheers giving him the energy he needs to get on stage. From watching movies, to reading books and listening to music, Young Jae pools all the inspirations into his song writing and hopes to present a new album to fans soon.

MeRadio.sg is proud to be the official Music Portal for B.A.P Live on Earth 2014 Singapore.

Check out how you can win a pair of Cat 1 tickets to catch B.A.P here! 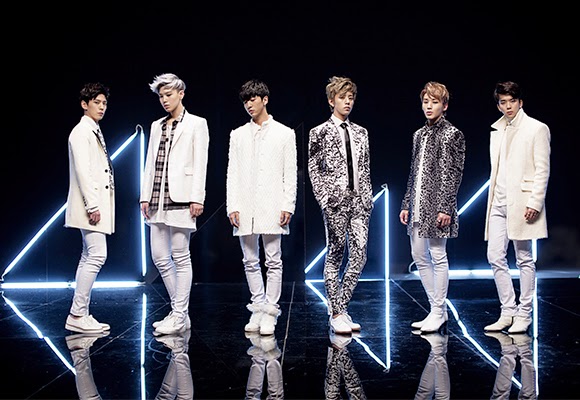