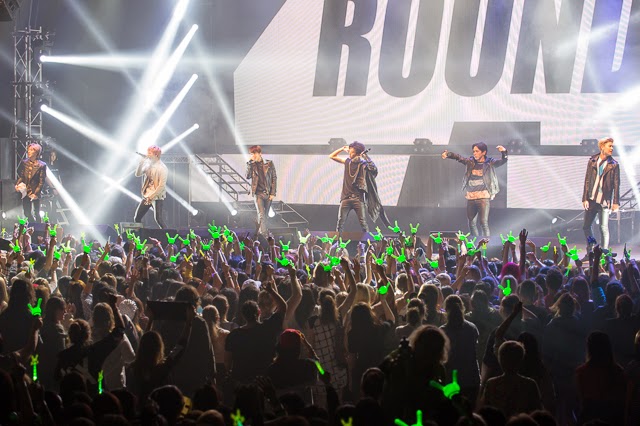 Eager fans of B.A.P (aka BABYz) were in for a treat last Saturday night when the boys came to town to perform as part of their Live On Earth 2014 concert tour at the Big Top, Luna Park. Some of the ticket holders were already at Luna Park from around 5am, super dedication as we head towards the colder months of the year! As the morning wore on, there was a new queue for the merchandise and delighted squeals from the fans who won one of the hundred high touch tickets hidden in the albums, an event letting fans high-five the members of B.A.P.

As the crowd waited patiently and the lights dimmed before the concert, we received a news flash about a UFO sighting before the aliens themselves appeared onstage with an explosive performance of “One Shot”.

As the performances went on, mini video segments introduced themes for the songs, such as a very cute cartoon between two Matoki (which was actually Youngjae and Zelo asking the question: What Is Love?) which elicited a few squeals from the girls! After an introduction to the Love segment was a performance of “Lovesick” full of both B.A.P and the crowd making heart gestures with their hands and arms, very typical in cute Korean couple photos!

The backdrop then changed into a café and the boys introduced to their barista who made them drinks. After quenching their thirst, they shared some drinks with some lucky girls in the crowd.

“Many people fail not so much because of their mistakes;
they fail because they are afraid to try.”
- George Foreman

While resting backstage, a few quotes appeared on screen, relating to the boxing world for those who would recognise names such as James J.Corbett, Muhamad Ali and George Foreman, and fast thinkers would make the connection that the next song would be “Punch”.
While watching the performances, I felt that B.A.P had a quite friendly and relaxed feeling during many of the performances, when they weren’t singing, they would interact with other members on stage.

“Do your ears still remember the music you heard with him?”

With this sweet sentiment played to A Great Big World’s “Say Something”, there was a lead up to the ballad “Rain Sound”, with the falling rain as their backdrop, you couldn’t help but shiver as if you were really out in the rain with someone.

Soon we were subjected to an educational video from Planet Mato. They were about to fill us with endorphins, serotonin and adrenaline with an amazing dance from 43,000 years ago that even Michael Jackson was a fan of. What came up next was a simple dance which involved everyone in the crowd clapping hands together to music which was performed to “Check On”.

During the talks in between songs, we learned that the boys were curious about trying fish & chips, meat pies and Aussie beer. And as each boy each said a line to the crowd, the “I miss you” and “I love you” messages were lost on me when Jongup asked us “Do you like my abs?” Why yes I do!
Prior to the encore, the screen showed twitter messages from the boys to John Mayer's "Edge of Desire", as TS Entertainment are a big fan of SNS i.e. social media, and I thought one of the sweetest messages was from Youngjae who mentioned that Sydney was as beautiful as his brother had told him!
After their performance of “1004 (Angel)”, we were requested to wait for their last song and one more costume change, although they teased us a bit by pretending to take their jackets off on stage. (Yes please!!) The finale “Warrior” which was also their debut song was also a showstopper!

B.A.P’s Sydney concert was very dramatic and charismatic, with some of my favourite performances being “One Shot” and “Hurricane”, the hurricane-spins during the performance really nailed it! The sweet songs “Rain Sound” and “Angel”, which was also complete in their lovely white outfits covered in bling. The crowd interaction with “Coffee Shop” and “Check on” were awesome as it really showed B.A.P’s affection for their fans as well as bringing the BABYz together!