B.A.P’s Him Chan: My fan named her baby after me 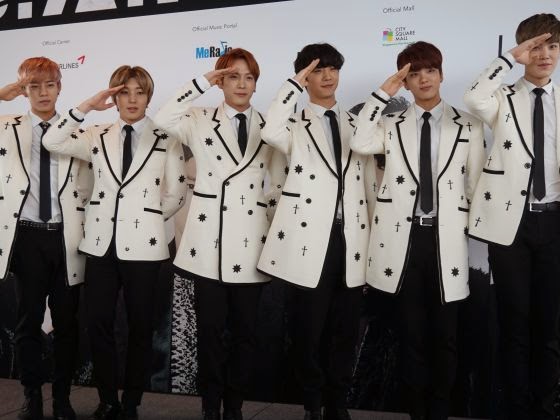 We imagine Korean boy bands have all met their fair share of, erm, over-enthusiastic fans.

But B.A.P’s Him Chan’s story about an extraordinarily devoted BABY — which is what the group’s fans are called — truly takes the cake.

“There was this Korean fan. She was pregnant when I met her, and she asked me if she could name her child Him Chan,” the Korean boy band member said. “I agreed to it, and now the baby’s name is Him Chan.”

Him Chan (the adult) was speaking at a press conference held at The Star Loft at The Star Performing Arts Centre, ahead of B.A.P’s concert in Singapore on Saturday. This is the group’s second gig here in less than a year.

The 24-year-old added: “It’s very amusing, because it’s not something I experience everyday. Him Chan actually means energetic in Korean, so I hope the child will be energetic, and I hope he will be able to experience all the good things in the world. I am very grateful to the fan.”

But fans aren’t the only ones who sometimes get too excited.

“Our fans are quite courteous, so they don’t make abrupt movements on stage,” said the band’s leader Bang Yong Guk. “But (one time) we got so excited on stage, and I remember kissing one of my fans’ hands.”

Here’s hoping B.A.P will get high on chilli crabs before their show in Singapore?