* TAKE OUT WITH FULL CREDIT TO BAPYESSIR.COM*

The stage for today~ 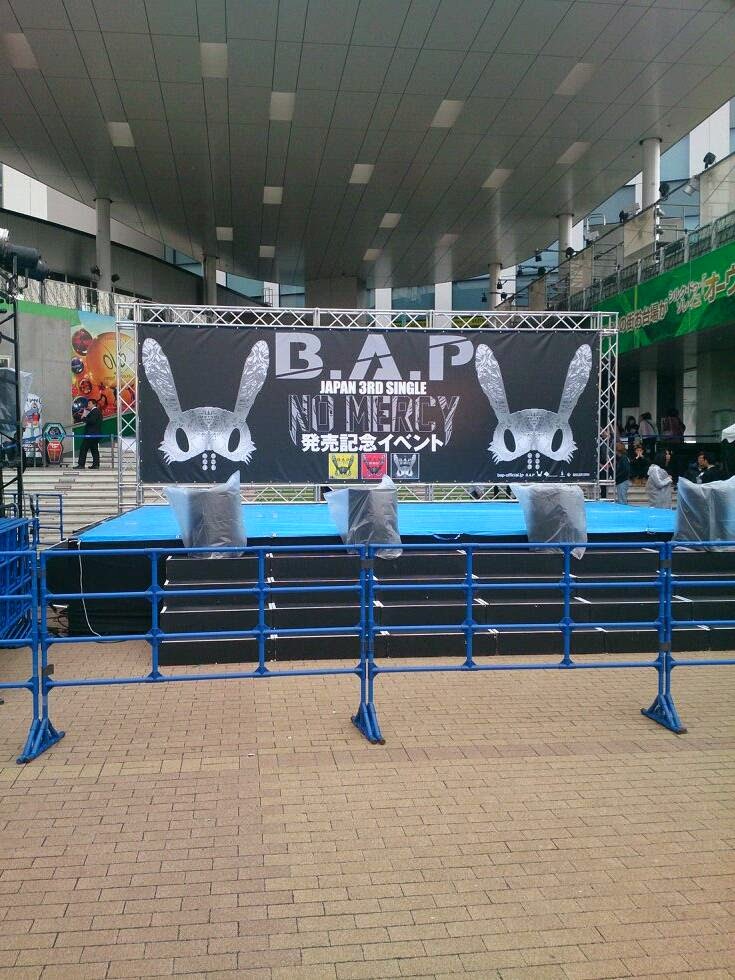 Hi Babys ^^ This is Nicole again, I went to B.A.P's Tokyo "No Mercy" release events in Tokyo the day after their events in Nagoya. The Tokyo events had a lot of problems, but none of them were B.A.P's fault, they were amazing! This fanaccount will be pretty short though because the event was so short because of the weather and other factors.

Quick list of issues that happened before B.A.P even got on stage today:
* I think whoever booked the venue/planned the event underestimated B.A.P and how many of us would come out to see them ^^
* There were like 2000 people at the venue, and there didn't seem to be enough staff to handle us all, we couldn't hear announcements or anything very well and moving everyone for seating was very difficult
* When about 1/2 of the A block ticket holders were already in the stage area or lined up ready to enter, there was a really bad rain/thunder/lightning/hail storm right before the show was supposed to start at 3pm. We all had to take shelter in different parts of the venue, and had to wait until 3:30pm before they gave the all clear to go and start lining up all over again, so the show didn't start until 5:05pm.

My random ticket number was terrible haha, but A Block was supposed to be priority seating for those who bought 3 types of "No Mercy" singles, B block were Baby who bought CDs that day 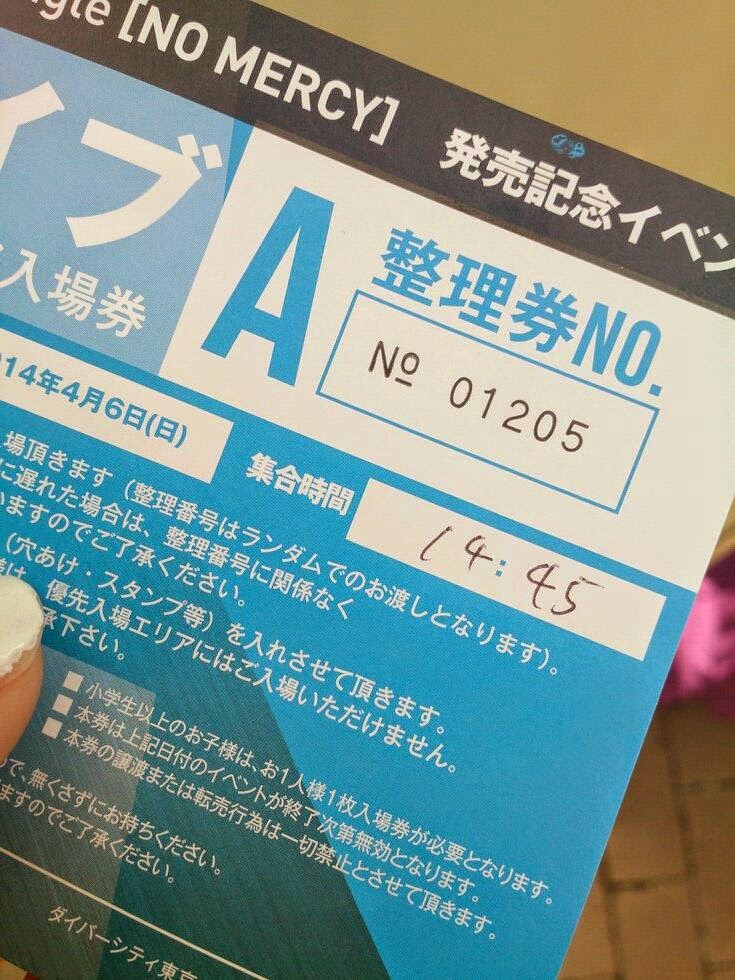 The weather caused delays so the event started about 2 hours late. However, B.A.P was in their tent waiting for about an hour, a lot of J-Babys were tweeting things like "I just saw Himchan and Youngjae run, I wonder if they came from the bathroom just now? Haha" Also "(We just heard) Someone tell Yongguk that the Gundam statue was moving, and he poked his head out the tent and was grinning while looking, then after that someone just stuck their hand out of the tent and pointed at the Gundam."  (cr: MusicChacoBABY, trans: Nicole @ Bapyessir.com). We thought we saw Daehyun, Youngjae and Himchan when the flaps of the tent got opened but we're not sure since they hid really quick ^^;;

When the MC Hoshino-san started the event, he had to skip B.A.P's intro because of the time, so he got the crowd excited saying something like "Babys and B.A.P want to see each other so badly right now, let's begin!"

They opened with "Excuse Me," and they seemed to be giving it even more energy than in Nagoya, like they were trying to make it up to us for the bad weather and everything. Yongguk seemed to be adding a lot of extra "Yeah's!" to the performance too. I was sort of sad seeing Jongup sleeveless though, IT WAS FREEZING.

Then they went right into "Dancing in the Rain," and for the little dance break when they call a member into the middle of the stage to dance, they called Jongup and while they chanted "Moon Jongup, Moon Jongup!"  Jongup did this silly dance with his hands on his knees that I can't name, but it's a move that I can only really imagine old men doing haha. Then they called "Choi Junhong!" and Zelo also did a silly sort of "can-can" style dance? Both of them were full of silly rather than swag for their dances ^^

They sort of rushed their their talk, saying like they did in Nagoya that they will be touring and coming back to Japan, and that we "Can't cheat on B.A.P" while they're on tour. They did try doing a lot of fanservice though, with the members who weren't talking at the time waving and making hearts at Babys though.

The last song was "No Mercy," and of course they rocked it. Again, they seemed to give everything they had to make up for all the delays and the cold and everything, it seemed like they really wanted Babys to have a great time. I think it was this song towards the end that Youngjae sort of ran offstage to touch hands with the crowd? I was really far back but I saw him get down from the stage and heard a bunch of Babys screaming before he went back up. B.A.P's hip thrusts and body waves were no joke today, wow....

We got to move up a couple meteres after this but still ^^;;
The statue is the giant Gundam that started moving just before B.A.P's mini live started, it's like a timed "performance" where it smokes and lights up and moves it's head, this was what Yongguk was apparently looking at from the tent. 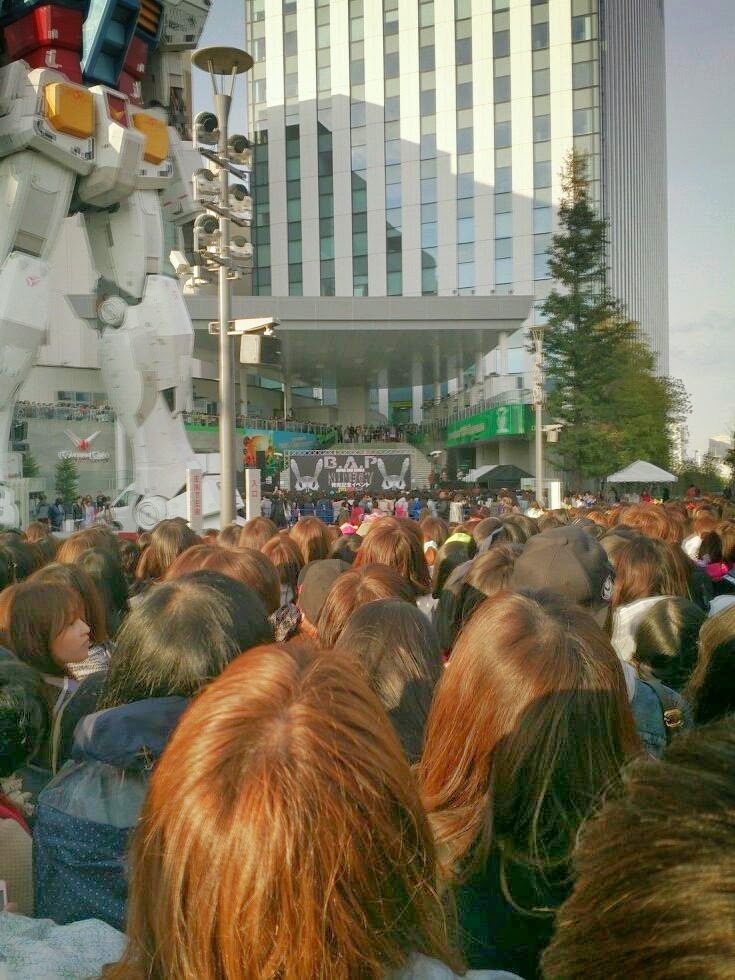 This took a long time to get started, and the format was a bit different: Since there were like 2000 people there today, they had a line going on and off stage for each member instead of 3 members on each side of the stage. This was nice because we could be closer to the members longer since we could see them as we walked the 1 meter or so towards them on stage.

I had 4 gift exchange tickets this day: 3 Yongguk and 1 Daehyun, and since there were so many people I wanted to make sure I used my Yongguk ones (Bias, sorry ^^;;). The line kept getting stopped to clear out the Babys who finished the gift exchange, so I got stopped in the line for Yongguk when I was in 6th or so place from the front. Me and a girl in front of me started waving at Yongguk since we were pretty close, and he just sort of stared at us sort of smirking/holding back laughter/judging us so I felt embarrassed and hid my head in my scarf ^^;;

Then the line moved again and I got to get another photo card from Yongguk, but with so many people   there staff was sending us through super fast (understandably) so I just said "Thank you Yongguk!" and went through. He smiled at everyone and looked super handsome~ It was frustrating though since the lines moved so sporadically the announcer was like "Yongguk's line is empty," like if you let us through it won't be empty haha.

I was going to try going one more time at least with another of my gift exchange cards but this was the line... 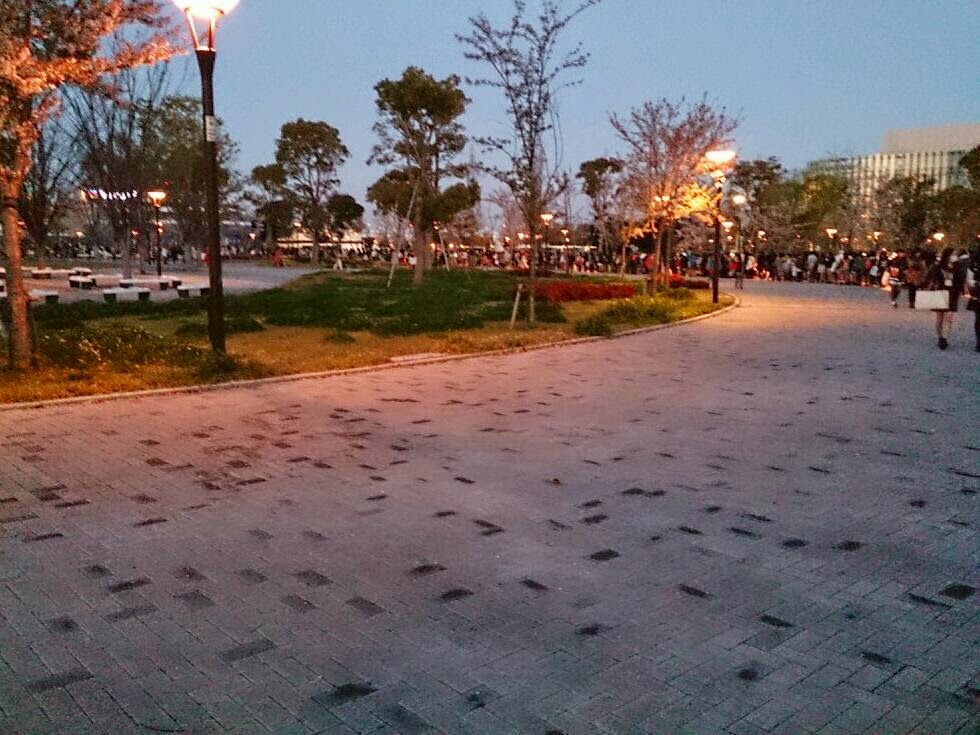 The stage and the giant Gundam were TINY from where I took that picture at the back of that line, and I really had to get home to I asked the girls around me "誰ペンですか？" ("Who's your bias?"), so I gave my Daehyun card to the girl infront of me and my 2 left over Yongguk cards to the girl behind me. I was super happy that they seemed so pleased, but of course I felt pretty sad I couldn't use them ^^;; Still, I'm glad I could help other Babys.

However, I guess most people only got to use maybe maximum 2 tickets since the lines were just so long, and since the event started late B.A.P and staff probably had to clear out fairly soon (it was around 7pm when I had to leave).

I heard some people say Daehyun looked a bit tired/sick when they saw him for the gift exchange, but then other people were saying he was smiling and looked good, so I don't know ^^;; Either way, they might have run out of Daehyun's Tokyo cards since I saw that a few Babys got "Nagoya" photocards from Daehyun (aaaaaaup & DAEJAE_com to name just 2), so maybe they ran out? There were so many people there today I wouldn't be surprised if they ran out of Tokyo cards and needed to use left overs from other events so Babys wouldn't be empty handed.

3 of 3 of my Yongguk cards:
"Shall we go to the convenience store together?" 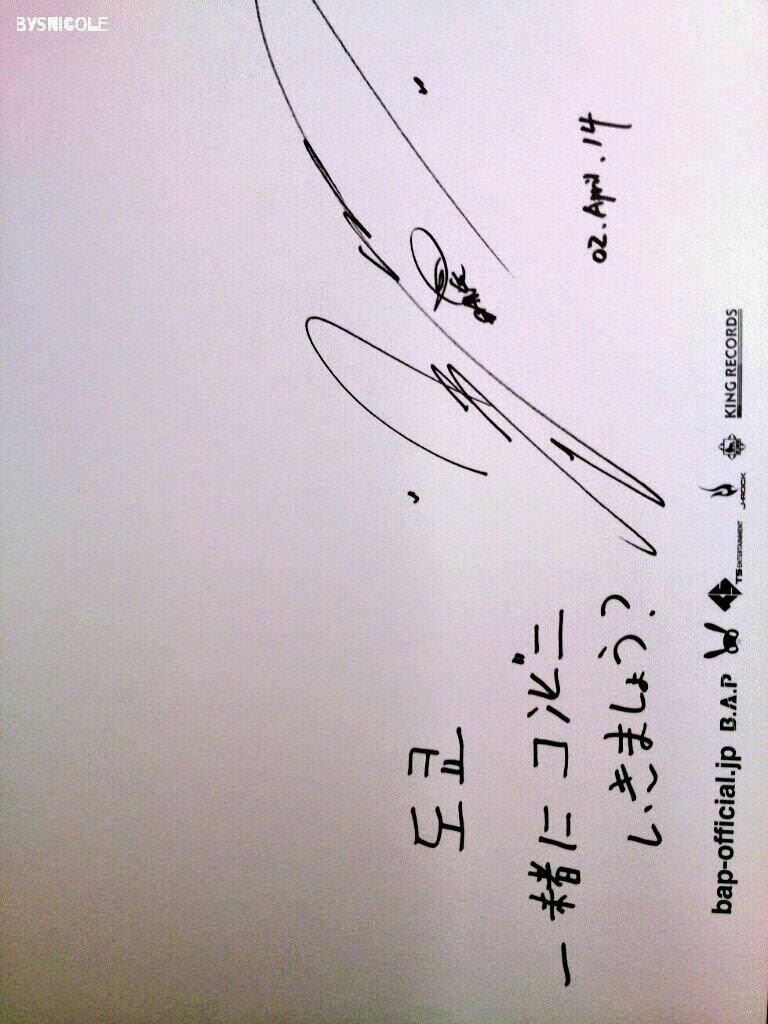 This was the last "No Mercy" Release event, and I hope they will hold more special events like this but maybe be more prepared to cope with B.A.P's growing popularity and all the Babys that will show up wherever B.A.P is~

Also, thank you to all the Babys who cheered for B.A.P at these events and who made these events even more fun.
And thank you to B.A.P for taking the time to perform and interact with us for the mini-live and gift exchanges ♥