With their tough sound, B.A.P are the new stars in the Kpop world, Showing B.A.P's New World! 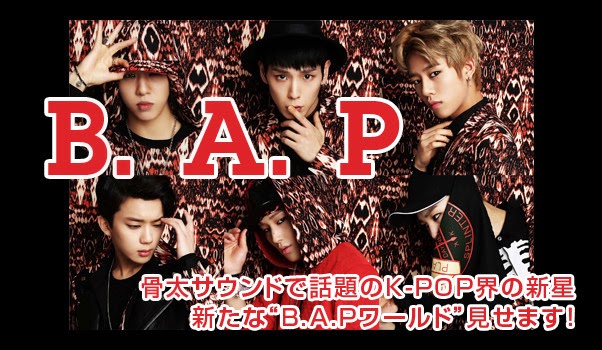 We are confident! Our music will spread with this single!

Q: Your 3rd single this time is a strong and catchy track, what kind of song is it to you?

HC: This song was released in Korea as well, it's a very Hip-hop track with a bit of a bad boy image, and also has wild parts. It's a song that we display that "We can do many things."
D: I think it was a new challenge. When we debuted we started out in Hip-hop, but this song also widens our musical range, so I think we gained confidence from it.

Q: Is the motivation for a song like this different when you sing it?

HC: We are motivated with any song, in any venue at any performance, but to show off the feel of the song each member thinks about it. Because this song is manly and hard, we show B.A.P that way.

Q: You can switch from one mode to another quickly, huh.

D: Of course!
HC: Because we're pros!
Z: For me, more than being motivated in singing "No Mercy," I'm having fun from the heart. Because of that, I can have a balanced mind without being nervous. Usually on stage I'm nervous and try to focus, but because it's "No Mercy" I can do it without being tense.
JU: Compared with "Warrior" and "Power," we can have fun from hearing the intro to "No Mercy." 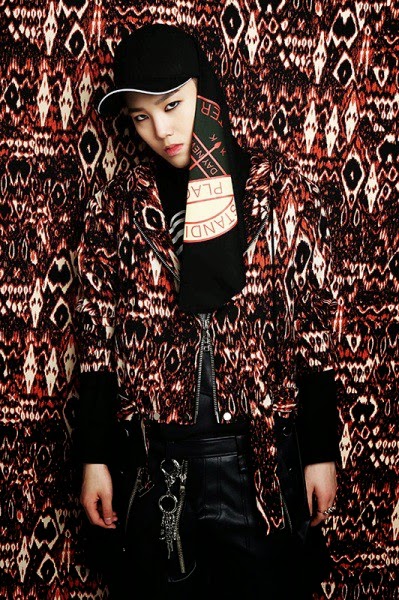 Q: What do you think about the lyrics?

YG: You can say up until this point we've done hardcore songs,  so we thought we could be confident in making Japanese lyrics. So, with this song we stand on stage and stand with confidence.

Q: With this release, what areas do you feel you have grown?

HC: I feel we have come to hold more pride when we get up on stage. Before we felt like "What should I do?" But now we're able to enjoy our performances.
YG: I think there are of course areas we have grown, but I think we need to control things that can be controlled. Also, it's necessary for us to get a better command of language. We have grown in being able to see the areas we need to work on.

Q: I think you saying that shows more growth than anything. As a leader, which member do you see showing the most growth?

YG: If I had to choose, maybe Daehyun? Of course everyone has grown too, but Daehyun has grown the most.

Q: How was filming for the MV?

D: It was a really fun shoot.
HC: When I saw the set, I thought that we'd be able to make a really polished video, completing it was fun.
JU: The hamburger I ate after filming tasted really good (laughs).
YG: There were more sets for the Japanese MV than there were for the Korean one, it took 2 days to film this MV.
HC: We were promoting our Korean album's "1004," so it seemed like every week we had an MV filming. We did 3!
D: That's right.

YJ: The presentation of pain for "1004" was very important, and also we showed a different image in "No Mercy" so that was why it was difficult.
HC: However, we're professionals so we did it perfectly!
YG: Since we're promoting "No Mercy" right now, Himchan is overflowing confidence (laughs). We film the video as the music influences us. 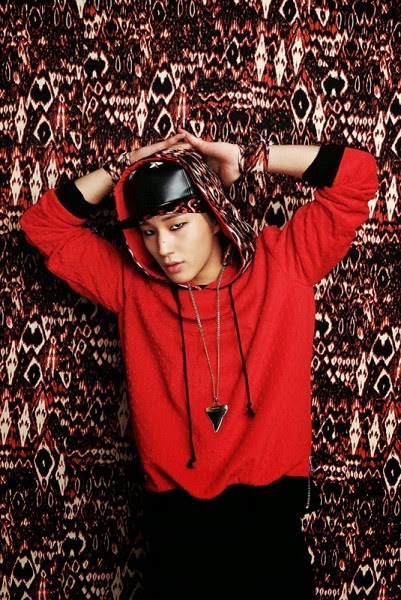 YJ: Next is out "Live On Earth 2014 Continent Tour" where we will also visit Japan, so firstly I hope we can complete the tour with not snags. Let's meet on this tour!

Q: Lastly, Japan will be having a week long holiday which we call Golden Week, so if you could have free time, what would you do?

D: I want to go on a trip by myself. To somewhere with few people. Where no one sees me (laughs).
YJ: I want to relax on my own for about 2 days, then the rest of the time meet friends and travel. I also want to come to Japan in my private time, even in Korea I'm not used to some places, so I want to go to places like that.
YG: Normally we live in a very convenient civilization, so I want to go to a bit of an inconvenient, natural place where I can adapt to nature. For example, a place I can walk barefoot on the earth and touch local people.
HC: I want to spend it alone. Overseas would be nice.
JU: I want to take fun pictures overseas with all our members.
Z: A sightseeing trip would be fun, but there are many fashionable people in the world, it would be nice if I could go to the city during fashion week and feel what it's like. 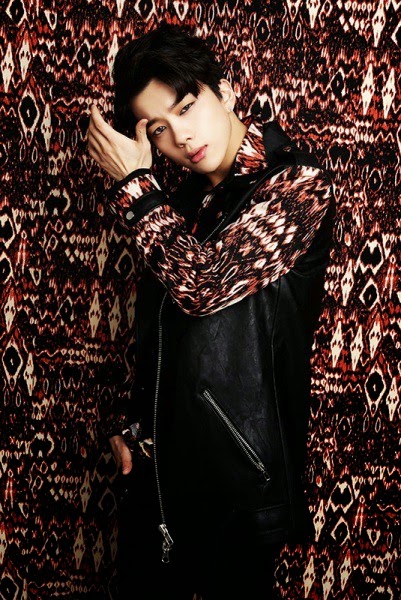 We want to change the world with music! B.A.P's Group Aim

Q: It's your first time with "Ranking Box" so first could you tell us everyone's charming point?

Daehyun: Zelo is B.A.P's maknae. Out of all of us, he is the most pure, he's a cute, good person.
Zelo: Yongguk-hyung is our group leader. He's usually silent, he speaks only when it's necessary.
Yongguk: Youngjae is the group's main vocalist along with Daehyun. He's really pleasant and good at making everyone have fun.
Youngjae: Along with Yongguk, Hicmhan is the oldest member in the group. Because of Yongguk's influence on him, Himchan acts a bit like an adult, but really he's a goofball. He's our mood maker.
Himchan: Jongup's body is solidly built for his age, his muscle is incredible. He's quite innocent so it's a bit worrisome sometimes, but that's his personality I think, and he has a lot of creativity which is cool.
Jongup: Daehyun-hyung is the main vocalist along with Youngjae. He's in charge of the high notes, so he's always belting it out for us, he's cool. 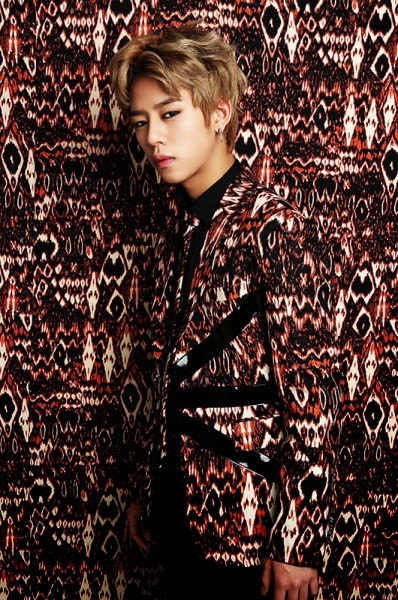 Q: The way you are trying to reach your aim, do you change in either Korea or Japan?

YG: Like our group name suggests, we aim for the Best, Absolute, Perfect stage. Also, we want to change the world with music. Of course we are living in a good world right now, but we need to help maintain it.

Q: You debuted in Japan in October last year, and won 2 awards in the 28th Japan Golden Disc awards. How does it feel to win awards outside your home country?

HC: It's an honour to recieve such prestigious awards. It's unfortunate but we weren't able to attend the awards, but we're happy to accept such wonderful, meaningful prizes. Being awarded these, from now on we want to always give our best in our Japan promotions and be able to show a good image.

Q: You also went on an arena tour, but being able to fill venues with thousands of people is exceptional right after a debut. How was it with so many fans?

YJ: We were able to grow with our arena tour last year, and it's good to say that our tour helped us grow. Up until now, this was the biggest scale tour we've done, we could do things we hadn't before, and do things we wanted to do. Using this experience, we could get real feedback from that time, and we'll be able to make our next tour even better, I think.
HC: A lot of people came to see us, so next time we will try and have more communication with everyone. 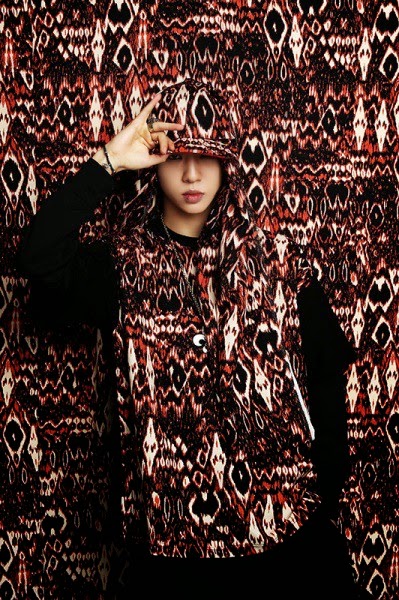 Q: What performance left the strongest impression on you?

HC: Of course, each performance has it's good points and leaves memories with us, but I think the show in Tokyo's Yoyogi First National Gymnasium when I did my "one man" performance (Himchan's 'Rainy Day' monologue) in the tour's largest venue left a really deep impression. Concerts are times to meet fans so it's always fun and makes us happy.

Q: Lately you have had fan meetings and performed for TV events (PON! Spring Festival), it seems like you are getting used to promoting in Japan, how has your feelings changed from before your Japan debut up until now?

D: Before debuting in Japan, we were always very excited to be able to see Japanese fans here, with our debut we think when we can show our image to fans, and we think about what we will do. Before coming to Japan we studied and practiced Japanese a lot in effort to be in touch with everyone.

Q: During your stay in Japan, did you go out anywhere by yourself?

D: We don't go out without telling someone.
HC: Our schedule was full (laughs)
YJ: This time when we were in Japan we had a little bit of time, so we played futsal (indoor soccer) with the staff. There were also places to eat ramen by our hotel, so we went out to eat ramen.
D: We were busy everyday, but our Japanese staff always thought about us. It wasn't just futsal, but we also played table tennis, and were taken to eat at delicious places. That's why, when we're in Japan we feel very happy. 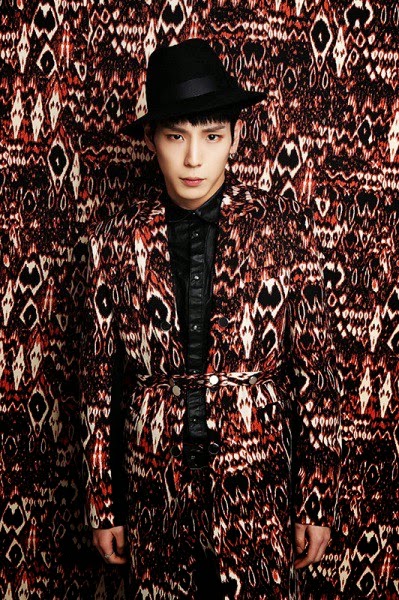