KpopStarz article: Why Is B.A.P So Powerful In Europe?

Why Is B.A.P So Powerful In Europe? 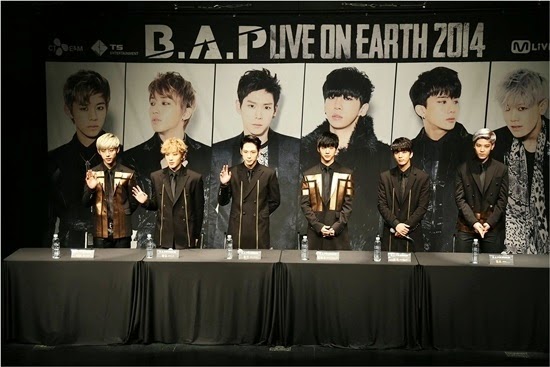 One of the leading groups of the next K-pop generation B.A.P is showing an especially hot reaction in Europe, and there's great interest as to why this is so.

On March 18th B.A.P revealed the lineup for their 'B.A.P Live On Earth Continent Tour.' The lineup showed that they'll be performing in 3 countries in Europe, expected to gather 20,000 people. This is a record for K-pop groups in Europe. Until now so many groups have performed in Europe, but a scale of this size is the first. B.A.P has thus far shown a great influence in Europe music charts, and their popularity was once more confirmed through their concert.

Even their agency is showing surprise at the love calls from Europe. One rep stated, "Even after the tour dates were confirmed, we've been receiving a steady number of inquiries for their concerts. We've been receiving many requests from the United Kingdom and Germany, as well as from Spain, Italy, Romania, and more."

The rep continued, "The Germany concert will take place in Dusseldorf, which has many neighboring European cities. B.A.P is expected to meet with various European fans."
B.A.P's Europe tour will take them to London, England on April 27th, Paris, France on the 30th, and Dusseldorf, Germany on May 3rd. The venue in London, O2 Brixton Academy, has previously housed big shot names such as AC/DC, Green Day, and Madonna. Paris' Le Zenith Arena has housed SM TOWN, Britney Spears, Christina Aguilera, Rihanna, and Alicia Keys.

In Germany, where the group has shown exceptional popularity, B.A.P will be performing at the Mitsubishi Electric Hall, which holds 7,500 seats. Pink Floyd, Bob Marley, Deep Purple, Santana, Lil Wayne, Pit Bull, Jason Mraz, and Leona Lewis have previously held concerts at what is one of the best historic venues.

Analysis points to B.A.P's unique music personality as the basis for their popularity. Since their debut, B.A.P has advocated 21st century group H.O.T, and have consistently presented powerful hip hop base music with a message that appeals to teens everywhere. That's how they set themselves apart from other recent trendy boy groups, and also how they've become so sought after by Europe fans.

They've even been spotlighted on the internet as well. At the European 'So Loved Awards' and Germany's 'Remarkable Awards,' they took home various awards such as Artist of the Year and Song of the Year, and received 3 rewards and 4 rewards, respectively. This is something that's hard to see for K-pop groups in Europe. On Germany's music site Remarkable, they took 2nd place to Big Bang in ranking popular idols.

One agency rep shared, "We believe the group is being widely praised for their powerful music and strong personality style in Europe. Even the translated lyrics are getting a hot response."
B.A.P's popularity doesn't end there, but extends to America as well. They performed here last year, and are planning for 4 concerts in New York, Dallas, Chicago, and Los Angeles.