BYS Luna was there!

[TAKE OUT WITH FULL CREDITS]

B.A.P opened with 1004. They couldn't fully go down at the “Look at me now!” part because the stage was so small. After 1004 they lined up and introduced themselves each as a type of boyfriend. I could only understand Daehyun and Zelo. Daehyun introduced himself as "Best Boyfriend" and Zelo as "Pet Boyfriend". After introducing themselves they did a Q&A where they each pulled questions out of a box submitted by fans online and on the phone (texting). The Q&A was done pointer style with the finger pointers and members decide who is what. I couldn't understand the first question but I know they picked Jongup and Himchan talked about his muscles and he thought they were scary. The next question was about who would choose the best date. It was a tie between Himchan, Youngjae, and Jongup. When Daehyun pointed to Youngjae, (who sat right next to him) Youngjae bit at Daehyun's finger pointer. Himchan said him and his date would go on a drive, get coffee, watch a movie, eat dinner, and go see the cherry blossoms. Next was Youngjae and he couldn't think of anything at first and Daehyun said "Hurry up!" (早く） to which Youngjae replied it's difficult (難しく). They then asked Jongup and Daehyun said “アニメ?” (“Anime?”) and so I believe they said something about Frozen the movie because I heard Ana and 雪 (snow) but the translator was confused and so Himchan said he'll [Jongup] will go with him on his date. Next Daehyun picked a paper and tried to read it but failed. He did say Absolute and attempted the next word but failed and gave it to the MC. The questions was who in B.A.P is the Absolute Angel? At first they all pointed to BABYs and then when it was time for them to decide Himchan and Zelo both pointed up while the others pointed to Jongup and I believe Jongup pointed to Youngjae. I couldn't understand Himchan's explanation for why they pointed up >< They chose Jongup because his nickname is Angel Moon. When they asked for Jongup's opinion he said "No way!" (絶対無理だ）. Afterwards Daehyun said he was the Angel (僕です).
Next they did Hajima.and Daehyun messed up a little at the beginning with his Japanese and laughed a little as he continued singing. After Hajima they did Dancing in the Rain. During this song Yongguk was smiling so much and after the first chorus they did a dance break and during that they did a dance circle. Daehyun went first doing silly dance moves and then a heart (everyone was chanting his name).


He tried to get Himchan to go next by chanting his name and pulling him in the center but Himchan pushed him back into the circle.  Then during the rap part Himchan, Youngjae, Daehyun, and Jongup held hands and did a wave with their arms (order --> Jongup-Himchan-Youngjae-Daehyun). When it got to Jongup (end) he did a whole body wave and when it went back to Daehyun. But as it got to Youngjae he tried to move it back to Himchan but something happened and Youngjae got hit in the head xD After the song they went backstage while the MC be out to explain the next segment and the staff changed the stage. He explained that B.A.P is going to put together their perfect girl by each person adding something to  the drawing. All the fans were to stand and when they added something that doesn't match you, you had to sit down. Afterwards, B.A.P came out with Daehyun carrying a big Matoki plushie (He kept saying Keke-chan) and Himchan rolling out a table with all 6 matoki plushies. And so the segment began and it went like this:
Zelo - eyebrows
Jongup - shoulder length hair
Youngjae - I couldn't understand if it was no to rings or yes to rings but it was something about rings and sparkling eyes
Daehyun - cardigan and skirt
Himchan - necklace and sneakers
Yongguk - horizontal stripes on the cardigan along with a button shirt and a collar

By the time it got to Yongguk there was only two girls left and I think he did the stripes because one of them had a striped cardigan. When it was decided who won, they had her go to the stage and each B.A P member signed the drawing and gave it to her along with all 6 matoki plushies. Everyone around me was saying how tall everyone was when the girl got up to the stage. Himchan wrote her name in hiragana on the drawing. While other members were signing Himchan and Daehyun were waving to the audience.

Here is the pic of the girl who won the drawing: 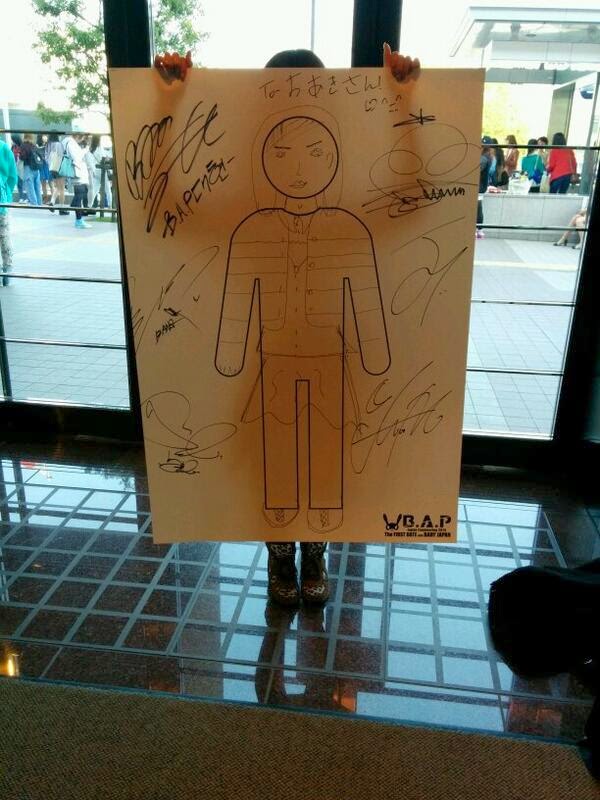 ©bap01015
When this segment was over they sat down and Himchan said they went to Rikyu (a famous chain of restaurants here in Sendai) and they ate gyuutan (beef tongue - it's the famous food here in Sendai). The next segment was a game called Galaxy Telepathy. Basically in this segment B.A.P would choose from a box a row of seats and they had to pick a number.That number of BABYs had to be standing when B.A.P announced their number and if they won each person in the row would get a photocard. The members were allowed to give hints to their numbers. They tried to do a practice with Yongguk picking and number the members acted as the audience, but they all failed. The order went from youngest to oldest and so Zelo was first. Zelo could not understand the rules of the game and so the row he chose didn't succeed. His number was 7 and the hint get gave was the number of letters in his name. All the other members thought the name he chose was Zelo and so they kept holding up the number four, but he actually chose Junhong. But in the end Zelo failed at getting the game and so the MC told him to sit down and they went to Jongup. When the MC was going to read the paper Jongup chose he saw Zelo talking to Youngjae and Daehyun having them try to explain to him the game and the MC said “Zelo you still don’t understand?!?” The number Jongup chose was 8, Youngjae was 3 (the hint for his number was the number of songs on the No Mercy single album - No Mercy, Dancing in the Rain, and Hurricane), Daehyun’s was 1 (his hint was him singing Only *grunt* shot, Only *grunt* shot xD), Himchan’s was 6 (his hint was how many members are in B.A.P), and Yongguk’s was 2 (his hint was コンビ*grunt* = konbini = convenience store a.k.a his favorite word in Japanese). When Yongguk did the grunt for Konbi_ the members were cracking up and so they asked him to do it again and when he grunted all the members fell down as if they got shot xD Daehyun fell down with the big Matoki plushie and was hugging it.

When they all sat back down Daehyun was still holding the Matoki (he was pretending the matoki was holding the mic) and Himchan and Youngjae decided to punch it back and forth. When Daehyun was moving it from Himchan the ear of the Matoki ended up hitting Youngjae in the head. At the end they let Zelo go again with the same row to redeem himself, but alas he still didn’t understand. and so Youngjae and Himchan were trying to help him and the number he said was 4. When they finally succeeded everyone else jumped and cheered for Zelo.
After the segment the MC and translator left leaving just B.A.P on the stage. Zelo was holding the Matoki plushie and while Youngjae was talking, (he was trying to read the teleprompter script) Daehyun was trying to cover his eyes. The “final” song they chose was B.A.B.Y and during the song Himchan and Jongup did a heart. After the song they all left the stage and the audience first blew their whistles to call B.A.P back, and then we started chanting “B.A.P! B.A.P!” Then they played the No Mercy (Japan version) music video. After the music video B.A.P came back out (they changed clothes) and performed No Mercy live. During both the MV and live BABYs were doing the fanchants. They announced some news at the end, but because Youngjae’s Japanese and he was talking so quickly a lot of us couldn’t understand what the big news was. At the end they each said something and Jongup did say they might be back for the tour. Zelo said “Time goes by fast doesn’t it?” When it was Youngjae's turn he would yell “Fighting!” and we would all respond. Then he switched to “Yay!” and we all did that a few times before Daehyun made him stop and do his speech. When they all finally left Youngjae was the last one to leave and he did a big heart.
After the fanmeeting I went to the back of the building where there were a lot of girls and we waited maybe 30 minutes or more until B.A.P came out into their vans. We all had to be very quiet because there were houses and apartments in the area and we were told not to fancam >< They all went by very quickly but Daehyun and Himchan stopped and waved to us a little. Daehyun said something (I think he said Kamsahamnida) but it was soft so I couldn’t make it out. Zelo wa the last to come out and he stopped to wave and put his hood on. When they were leaving Yongguk stuck his fingers out the window and waved to us. His fingers are ungodly skinny, like no joke~
Anyway, the fanmeeting overall was lots of fun. Their Japanese was cute and they made mistakes, but that’s what made it cute. Yongguk’s smile was sooo contagious. Every time Himchan would pick a paper out from the box Youngjae and Daehyun would say his name all exaggerated (ヒムチャン～ヒムチャン～hiMUcha~n hiMUcha~n) and then Himchan would correct them by saying his own name and the way he was it was super cute. It was a fast and fun meeting and I can’t wait until they all come back~! Sorry this was soooo long ^^;;

Luna said that the boys are currently rehearsing.
At the venue, there was some goods for sale, including CDs, lightsticks, whistles, t-shirts, bags, and other stuff. They also had the little matokis on display. 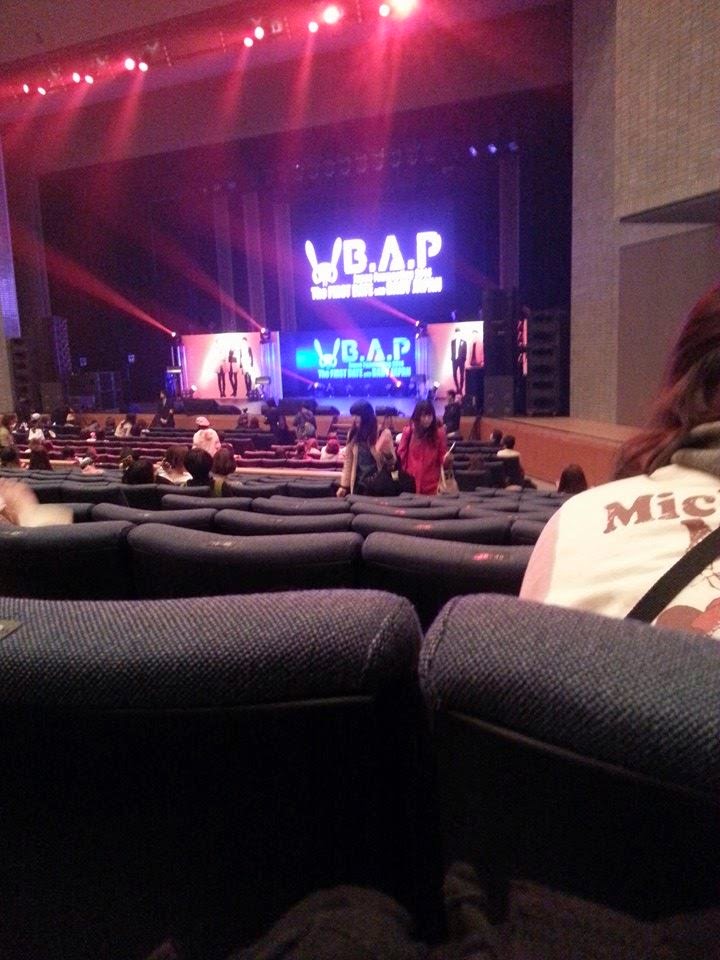 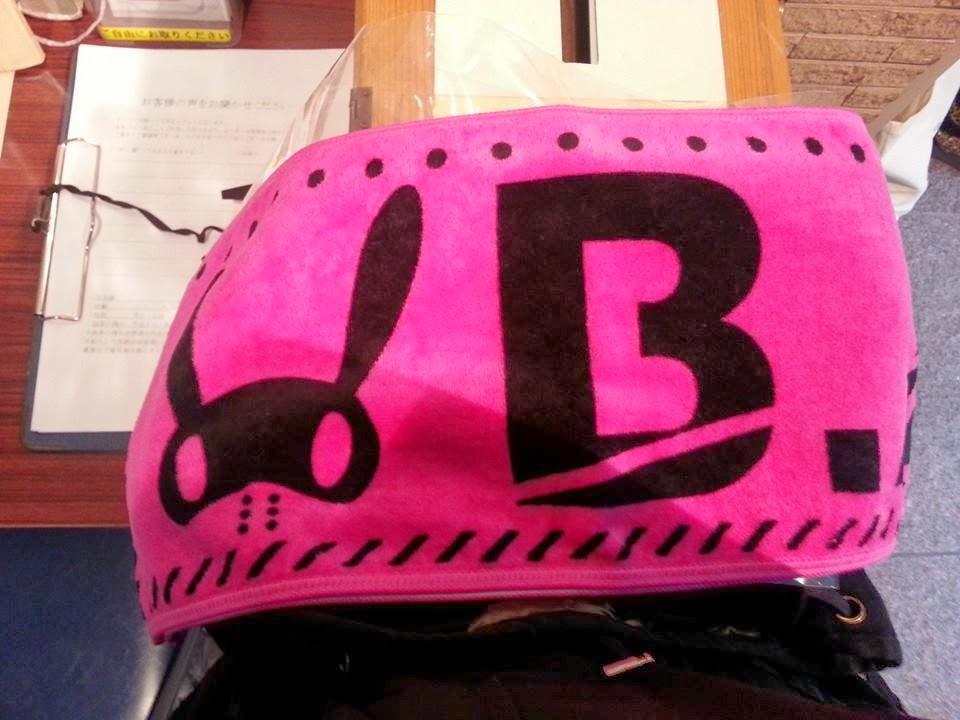 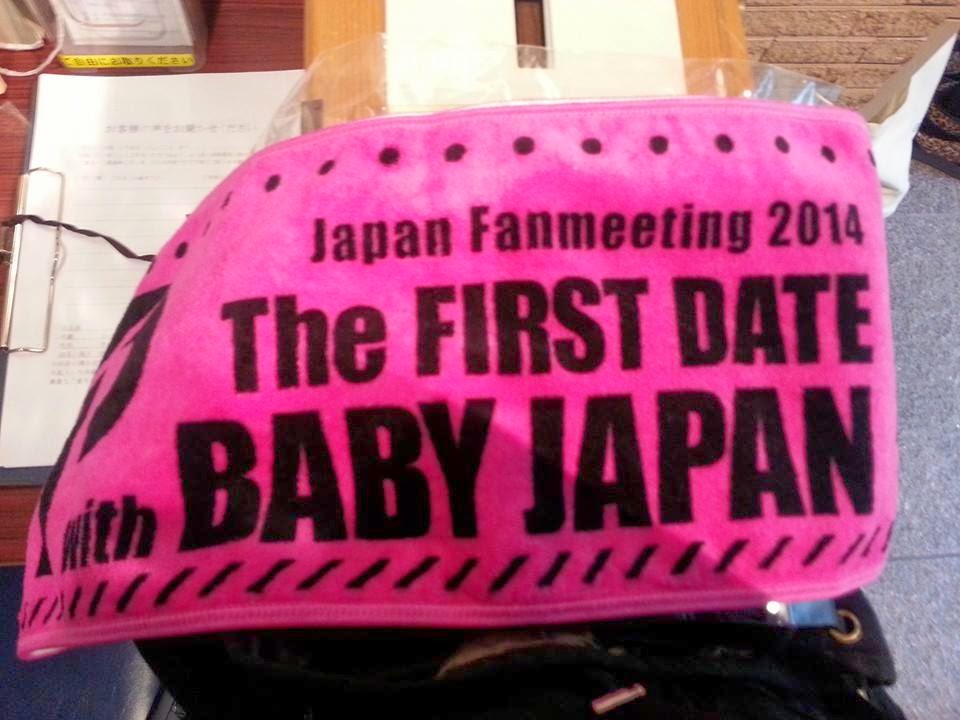 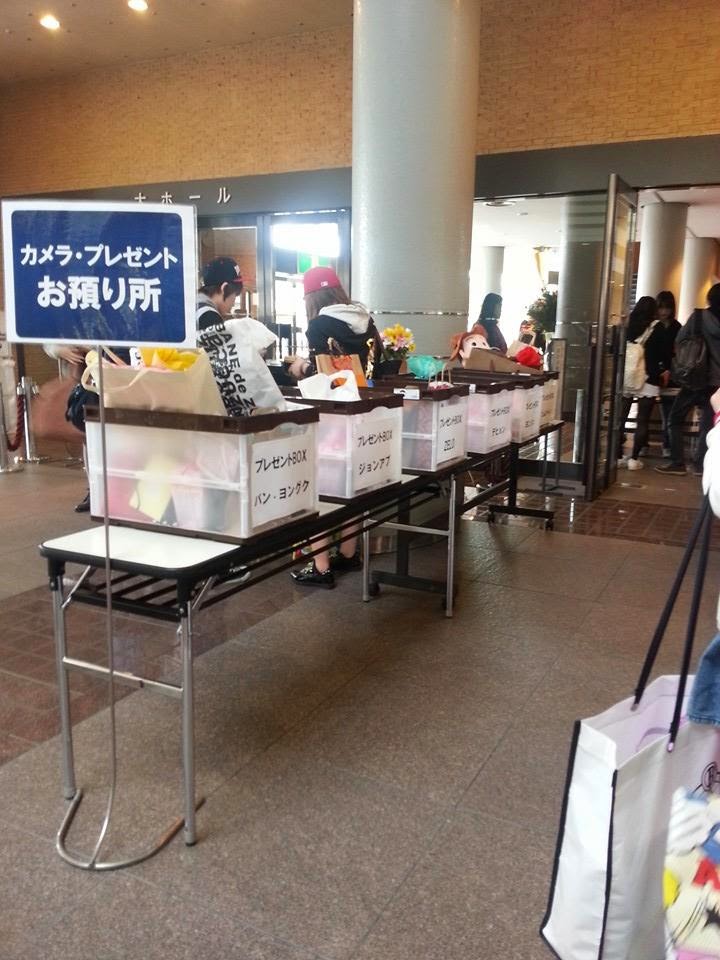 Here's also a pic of the present boxes.