Those who registered for the fan gathering should send their payment to sitimarianaroshalim@gmail.com

TeamBYS Mariana was told by the magazine that the fan gathering details have changed, they are now as follows, with more info coming soon:


* The date has been changed to May or June
* The venue is still at Karangkraf seksyen 15
* For those who gave their name to team BYS Mariana before this MUST pay RM24 asap
* For those who want to join the gathring can buy KLIK magazine issue 1st Jan and 1st Feb this 24th April till 4th May at International Book Fest PWTC (Pesta Buku Antarabangsa) to get the form (the form is in that magazine)
* You can also get previous issue magazine at the book fest.

Mariana already email-ed those who sent their name to her, but if there is anyone else interested please contact us soon (either bysfansite@gmail.com or sitimarianaroshalim@gmail.com)

And for those who have been asking, it's a gathering of fans, B.A.P is not scheduled to be there. 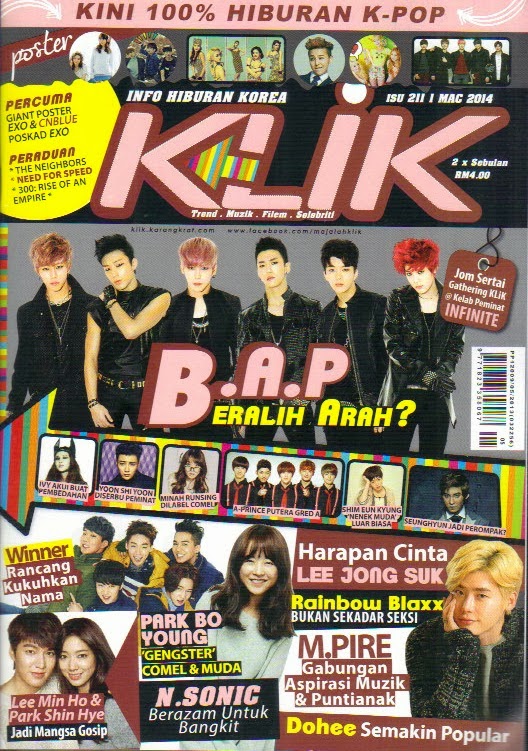 Synonym with Best, Absolute and Perfect, B.A.P determined to make 2014 as the best lane to compete to become the best rookie group.

ALBUM
TS Entertainment and B.A.P just released a full length album, “First Sensibility” last January. It is B.A.P’s first studio album after releasing two EP, “Badman” and “One Shot” with a single album, “Warrior”. As lyricist and leader of the group, Yongguk thought his involvement in lyric-writing in some songs as an honor for himself. Containing 13 songs altogether, Yongguk energetically stated that he can stand at the same level as other musician such as Park Jin Young and G- Dragon.

VIDEO
With the release of the album “First Sensibility”, B.A.P also released a music video of their title track, “1004(Angel)” on their Youtube channel. “1004” is pronounced as ‘chunsa’ which means angel, is an acoustic dance song and is mixed with folk and rock element. Different with previous B.A.P’s songs, “1004(Angel)” proves that they don’t stick to one genre only. The music video gained almost 1 million views on Youtube in only three days. 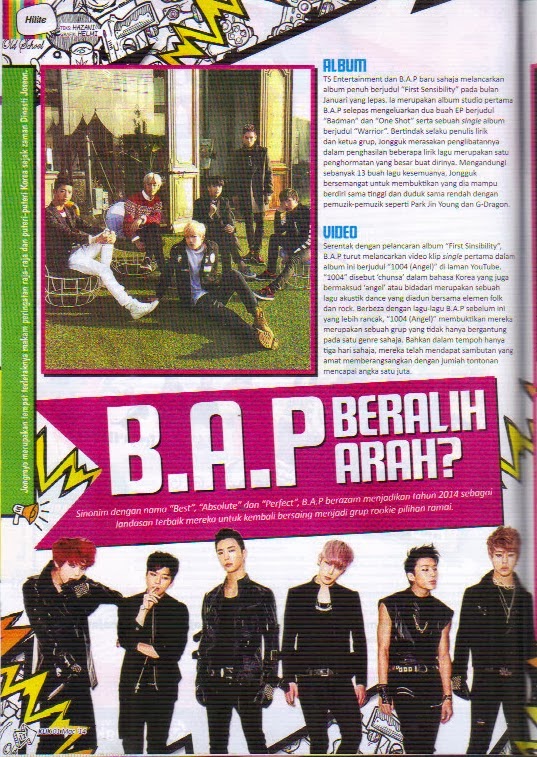 CHANGING DIRECTION
“First Sensibility” brings a different direction in B.A.P’s music concept. Their transformation in this album is very different with “Badman” , “One Shot” and “Warrior”. It is obvious in songs like “1004(Angel)”, “Easy” and “Save Me”. More to ballad and soul, B.A.P want to change their direction from their usual concept. Said a representative from TS Entertainment, it’s not a new image that B.A.P will keep forever. They will change to rock dance dan hip hop concept after this.

ANNIVERSARY
On January 27th , B.A.P celebrated their second anniversary of the group in music industry. They recorded  their gratitude special for their fans(BABY) on their official website. Wanting to change from their old self, B.A.P determined to show more charisma and a better choreography. “We want to be the most consistent group in Korea. We don’t mind if we don’t get to rest, as long as we can spend a lot of time with BABYs. Wait for us at our concert.” said Zelo. 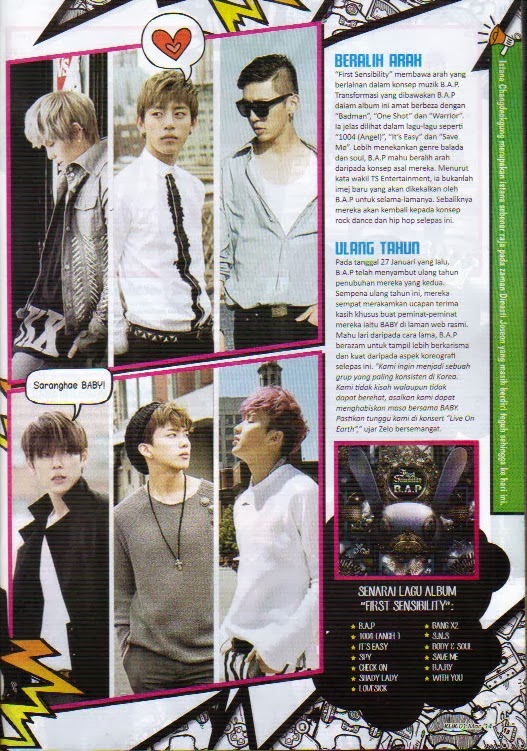 What is B.A.P’s target for “First Sensibility”?
YG: It just got released but we were told that the sales are good. I can’t believe that fans are happy to accept us. I hope it can be people’s choice album this 2014 and will receive numerous awards.

Obstacles during producing this single?
ZL: Singing in different language. We focus on correct pronunciation so that the lyric is the same as the meaning.
DH: As Zelo said, I am also worried about the mispronunciation. Because of that, I try hard to learn Japanese before releasing this song.

B.A.P’s long-term target?
HC: All six B.A.P members joined this group in different lanes. However, I think that all six of us have the same target and dream.we carry out our activities seriously.
DH: Personally, after B.A.P debut we aim for the best rookie award. Last year we achieved it and for now, we are keeping the same mission. It was a beautiful memory that made us happy.
YJ: To me, all we did during our tour concert “Live On Earth – Pacific Tour” were the top success. It left us a big impact in our jouney in the music industry. This time around we start with “Live On Earth” at Seoul Olympic SK Handball Stadium and will go to other places. 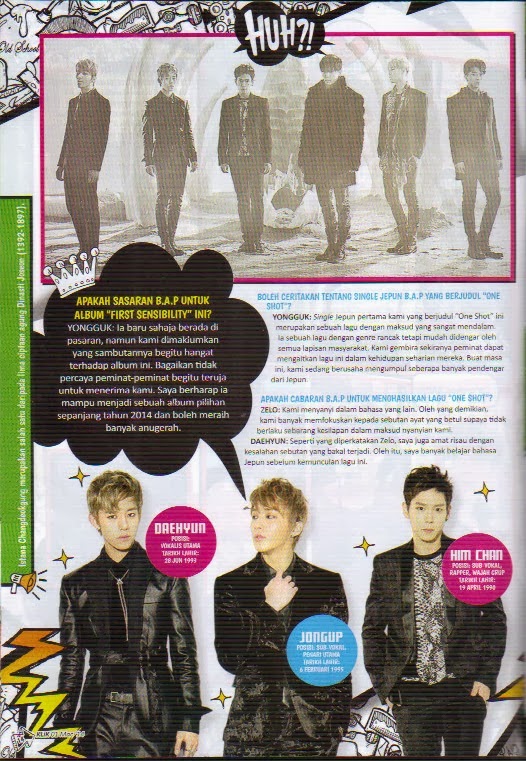 Preparation for Japan debut?
HC: Very happy when we got to know that the date for out Japan debut is set because it will become a new challenge for us in 2014. Thinking of meeting with different fans with a new style and songs make me feel excited.

Can you tell us any experience from “Live On Earth” concert?
YJ: It was B.A.P’s first oversea tour and the most memorable moment was when fans from other countries watch us perform on stage. Even though the difference in language, it didn’t become an obstacle for us to interact with them. The most exciting part was when they sang along with us.

Your opinion on other B.A.P members?
HC: Youngjae is handsome, cute, spoiled, very good in Japanese and more. Personally, I like him the most among the other group members. His skin is also smooth.
YJ: Bang is a very dedicated leader. He is also very kind and will do the best for the other group members. That quality makes him the best group leader.
YG: Daehyun is a very good singer and his talent is great. He is diligent when practicing and good in showing difference of B.A.P’s music.
It’s undeniable that he is a great singer.
DH: To be honest Jongup is a generous member.
JU: Zelo is the maknae. He knows how to have fun on stage, while showing his bring and fresh character all the time. His skin is also smooth. I’m not lying!
ZL: Himchan is a cool guy. He also know a lot of things, except for sweating.

What B.A.P worried about when you become famous?
DH: Fans know that B.A.P is influential for our energetic live act. That factor made us better when performing. Because of that, we will work hard to smile and keep the momentum when performing in our own ways. 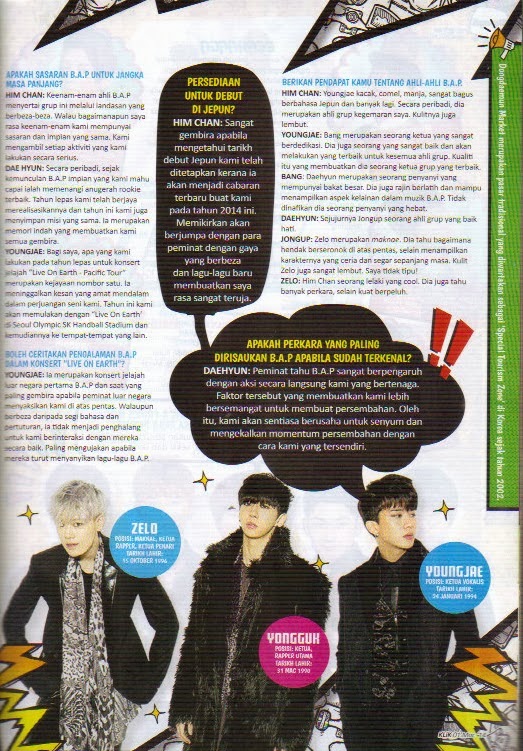 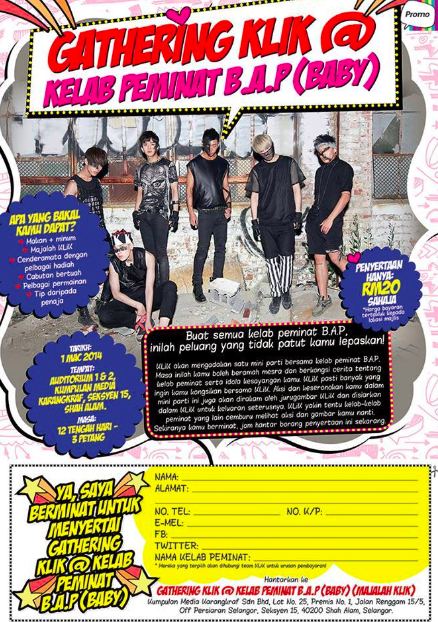 Our Malay translator Mariana met one of the editors of the Malaysian magazine "KLIK". They asked us our fansite's help to get the latest news and pictures about B.A.P since they will be on the cover of the March issue of the magazine!


KLIK will organize a fan gathering soon (minimum 50 Babyz), and they already contacted sponsors for the event, they just need some promotion. The event will be held on March 8 at Auditorium 1 & 2, Kumpulan Media Karangkraf, Seksyen 15, Shah Alam.
Malaysian Babyz, please check it out!
Posted on Sunday, April 20, 2014