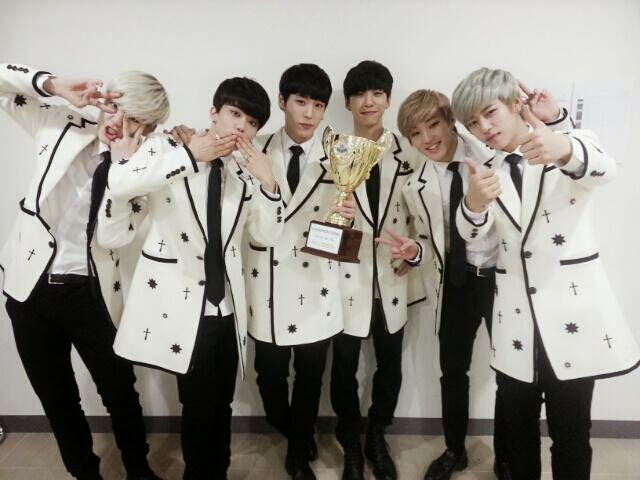 Yesterday, male group B.A.P was finally rewarded for their two years of hard work, as they took home their first ever music show win on “Show Champion.”
Leader Bang Yong Guk confessed to media outlet Star News during an interview, “We were dumbfounded and did not really realize what happened, so we kept wondering if it’s real,” and continued, “We always used to quietly stand at the back of the music show ending stage, but this time was our first time standing in the front. Seems like also the other members were filled with emotions, as they were about to cry.”
B.A.P received their first ever trophy on “Show Champion” for their comeback song “1004 (Angel).” On the same day, they were given this year’s World Rookie Award at the 3rd Gaon Chart K-Pop Awards.
“As we just made our comeback, we are still adjusting to our hectic schedule, and don’t really have time to enjoy our the happiness of receiving the award. It feels like the award is supposed to make us work harder, so I feel a sense of duty. I felt like we must make more music of better quality,” the leader said.
“We feel very emotional about every album, but this album is our first full-length one, so it feels more special,” he continued. The group’s first studio album “First Sensibility” was released on February 3, and it has performed well on both domestic and foreign charts, boosting the status of K-pop artists. In particular, the album ranked high on iTunes charts in multiple countries, proving that B.A.P is loved by fans around the world.
Bang Yong Guk concluded, “Instead of following the current trend of a jazzy style or a funky vibe, we somehow tried out nostalgic punk-rock music. Until now, I wouldn’t say B.A.P’s songs had no difficult feel to them, but this time we focused on making music that the public can relate to, and I think we succeeded because of that.”
©Soompi

Email ThisBlogThis!Share to TwitterShare to FacebookShare to Pinterest
Tags promo:1004