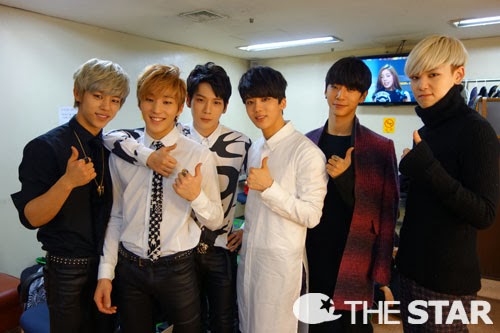 B.A.P who debuted two years ago, has won in the ground wave music program.

On February 14th, we met B.A.P in Yeouldo KBS Music Bank waiting room. They were all focusing on the rehearsal stage before their live performance. Is it because they wanted to win first place after they won first place in Show Champion? They looked serious.

Q. Show Champion. 1st place. How did you feel?
After we debuted, we tried so hard for last two years. I’m happy because I feel like we gave back to the staffs and fans that have always waited for us. (Youngjae)

Q: is the nickname ‘B.A.P doesn't take a break’ still valid?
After the world tour, we worked on this album right away. We will only focus on our schedules in Korea for now, and we have the concert that you’ve been waiting in March. We will prepare a lot for Babys. (Himchan)

Q: not single, not min album, Full length album means a lot for idol groups. What was the most painful part or best part while working on the album?
We were not focused because of many oversea schedules. So I am a little disappointed in our practices. Especially for Yongguk, it was harder for him since he participated in the album making. After we safely finished our album making and had the album in our hands, I would never be able to explain the happiness I felt. (Daehyun) I tasted the bitterness from the participation in the last album. For this album I put my everything into it. I’m glad that many fans like it. (Yongguk)

Q: how did you feel when you got nominated for the shorty award? Are you interested in charity work, Yongguk?
I was just honored to be nominated with many famous stars and politicians. When I was young, my grandparents were into charity works. I think it’s because I grew up watching them.

Q: team’s youngest and the only teen in the group, Zelo. What do you want to do the most when you turn 20?
I want to compose a song by myself. After it’s done, I want to show it to Yongguk first. I have a lot to learn from him.

Q: Himchan, I heard you are a pro at taking selfies, can you tell Youngjae how to take them?
(smiles) rather than selfies, I’m into taking pictures of fans nowadays. Most memorable picture is the one I took in Hong Kong when flowers were being thrown in the air, it came out blurry. That picture is my favorite. Teaching Youngjae how to take selfies….there is no way, you just need to use three different photo applications.haha

Q: during your comeback, your stage for three different broadcast were different, didn't it confuse you?
Three songs aren't hard. We did at least 15 songs in concerts. This comeback stage didn't have a lot of choreography in it so we didn't make any mistakes. (Yongguk)

Q: can you tell us your feeling about winning first place in advance? If you don’t win we will keep it a secret.
(everyone laughs) first of all we thank TS entertainment family and producer team. I think I’ll think of our parents the most. Member that’s going to cry if we win? Hmmm… we never showed each other our tears. Shouldn't you laugh/smile when you are happy? Haha! (Yongguk)

Q: your hope for 2014?
You will hear “are you going again” we thank all the babys who supported us for the past 2 years. We hope that we’ll be together forever.