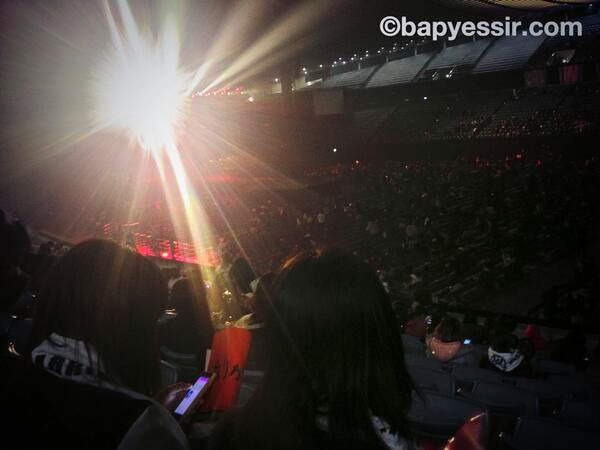 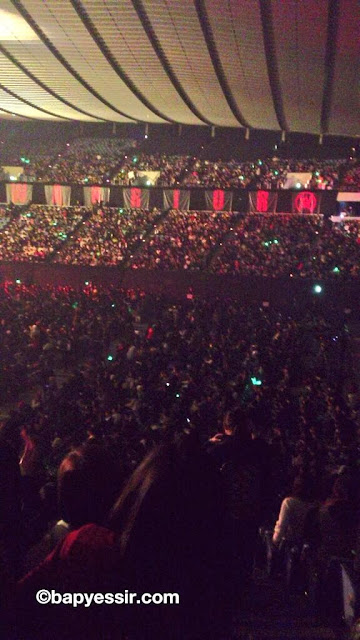 *my seat was in the Arena A block, row16. (It's pretty near the main stage and also the sub stage, but it's at the sides... still, I was able to see the stage and members clearly.)


-I personally thought that today the audiences were warmer than yesterday. (yesterday, people were kind of quiet and they didn't get so crazy)
-Also, I noticed more fanboys were here today, especially with their girlfriends! (BABY couple everywhere!)
-the venue hall was LITERALLY packed today. there were only several seats which were vacant.
-there was a lot of cameras in the venue today, because they were filming it for the broadcast? (or maybe for live DVD? I really hope they'll release DVD later...)

[Special Moments]
*note* I'm sorry for my fanaacounts are mostly focused on Himchan, because he's my bias... lol

Yongguk
-he was being all quiet and smiling everytime
-today he didn't speak much (actually he didn't speak at all today)
-I loved when he just stood still watching the boys fooling each other during the MC
-even though he didn't do anything, when the big screen showed Yongguk, all the BABYs went "OMGOMGOMG YONGGGGUUUUKKKKK!!!!!!!!"
-I'm not sure when, but I think messed up with choreography (maybe during ONE SHOT performance?)
-there's a rumor that Yongguk was crying when he was singing I Remember.... but doubt that... I think he was just sweating a lot, and it looked like he was crying.
-he looked he was having a lot of fun on stage today, because he was jumping around a lot.

Himchan
-he got stuck and paused few times when he was speaking in Japanese during the MC, and when he made some mistakes, he looked a little embarrassed (CUTE)
-he was asked to do a sexy pose during the MC, but his pose wasn't sexy enough (from my opinion) and it was completely awkward.
-when Youngjae said his voice was handsome(better) than his face, he denied it, and asked the audience "I'm handsome, right?" But because he didn't get much response from the audience, he asked again saying "You voice is too small!! I'm handsome, right!?!?!" (he really wants us to say that he's handsome lol)
-during the HURRICANE performance, Himchan slung his arm around Daehyun.
-he lowered and took off his jacket halfway several times (he hanged the jacket around his arms) and I was screaming "TAKE THE DAMN JACKET!!!!" but at the end of the concert, he finally took it off
-after he took off his jacket, it was time to say goodbye to fans, but he covered his armpits with his hands when he waved to the audience (but I SAW HIS ARMPITS. I have no idea why he even covered them... then why did he take his jacket off in the first place LOL)

Daehyun
-I need to say this, but I now understand why Daehyun has the most fans (maybe not the most, but a lot of fans)... because he was the one who paid extra attention to his fans, and gave signs to them. He looks over to the audience a lot, and when he finds a fan who is holding a fan board with his name on, he just give them signs like "I can see you~XD"
-I personally thought that his Japanese pronunciation is the best
-during the MC, he mimicked Yongguk's rapping, but because it wasn't that funny, he was asked to do Kiyomi song. He looked a little embarrassed, but he did it~

Youngjae
-he was speaking the most during the MC, I think.
-He did that "Baigaeshi" again and again XD this really is his favorite phrase!
-he also did Naruto's "Kagebunshin no Jutsu" with all other members. and asked Himchan to hold his mic for him while he do it, but because Himchan held the mic too high, he pushed the mic down with his hand. (but Himchan raised the mic on purpose again)

Jongup
-during the MC, he mimicked the giant's movement from "Attack on Titans." (it's a super popular Japanese manga.) and he did it with Zelo. Yongguk somehow got super excited about it, and he didn't need to, but he also did that movement too LOL
-Jongup failed doing backflip and landed from his hip (I hope he's not hurt)
-during Dancing In the Rain, he pulled his shirt up and showed his abs!!!!!!!!!!!! but he didn't pull it up soon... he pulled it up slowly and was teasing all the BABYs XD
-at the end, he tried to throw the towel to the audience who were in the further seat, but he failed and made this face like "It's not my fault, you know."

I'm so sorry. I am REALLY bad at remembering all the details of the concert, so I know my fanaccount is messy ;w; But today's concert, all the audiences were enthusiastic/energetic than yesterday. People were screaming and shouting members names more, dacing the chreography, did more fanchants, and I honestly thought that today was WAY BETTER than yesterday. Also, I noticed more fanboys today!!! Most of them were actually coming to the concert with their girlfriends. BABY couples!!! I'm just proud about them, because it's only 3 months since their Japan Debut, and their having a concert in large venue like this. And it was PACKED today.
I just hope they had a wonderful time performing!!!! It was the best concert ever <3