Hi again, this is Nicole/BYSAhjumma~ This is my fanaccount for B.A.P Warrior Begins at Yoyogi, December 4.


Please Credit ©bapyessir.com when taking anything out

The set list of this concert is the same as the previous concerts (Nagoya Day 1 | Nagoya Day 2 fanaccounts for more details), but they did a lot of new things during the MC breaks and after the encore! However...Today's "Member" section is heavily biased, I'm sorry ^^; 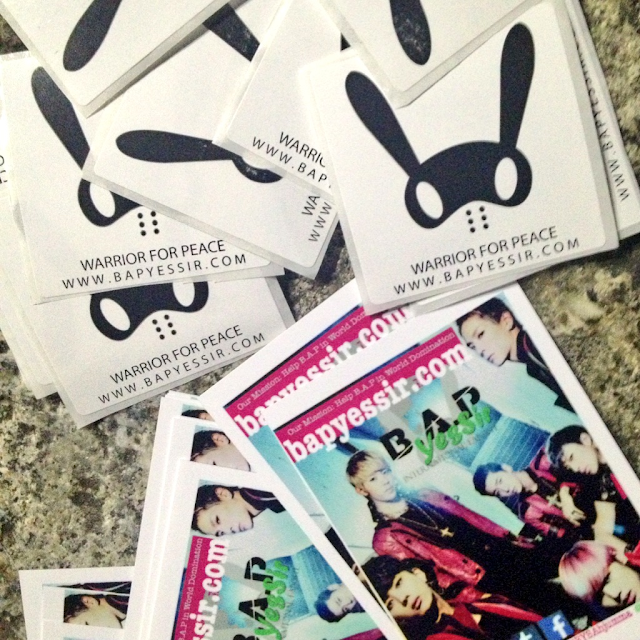 Some photos from "Why So Serious," random Yongguk photo/cards from Yui, Candy from yukixxxbunny, and fyeahmjup card from Lyn, Thank you!
Plus the only actual goods I bought: Warrior long towel, and a whistle that stopped working 1 minute into the first song of the concert T_T 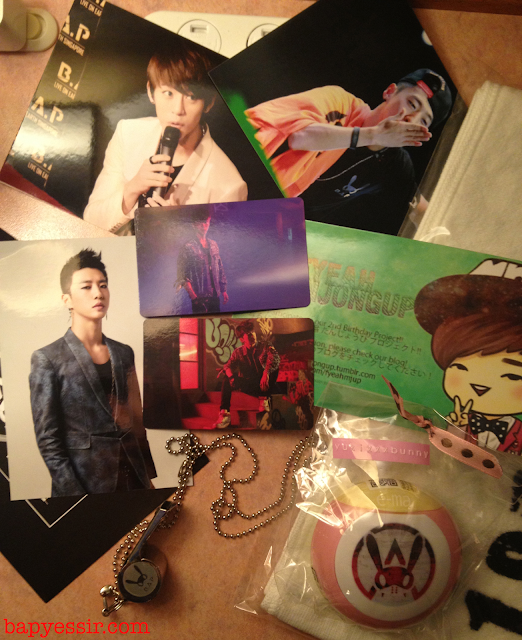 The venue as it was filling up before the show 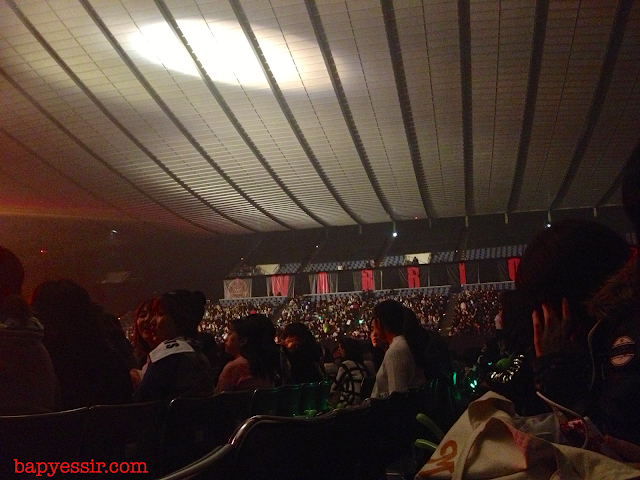 I was in Arena B-block tonight, which had a really decent view of the extended stage, even if it wasn't super close 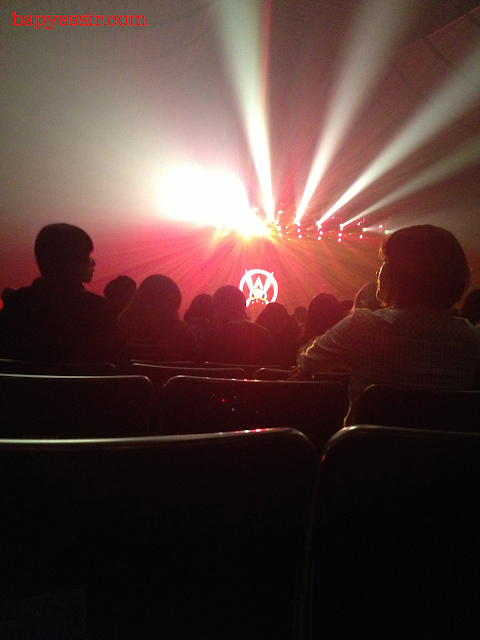 Yoyogi First National Gymnasium is BIG. The arena, first level of stands and some of the second level of stands was filled, so really considering the size of the venue, I think it was a good turnout. It seemed on ticketing sites that there were more tickets sold for Dec. 5th though, so we'll see. There were also a LOT of fanboys at this concert! They seemed to be even more strict with cameras since there were so many venue staff members watching us the whole time, so please be appreciative of all the fantaken pictures fansites were able to get since they really must have worked hard to get their pictures!

Couldn't think of a better name to call this sorry.

* Showing off the "Cute Fans"
Daehyun said that as he was on the extended stage, he noticed how all the fans "are so cute." Himchan (or Youngjae?) asked "Really?" and Daehyun said "Yes, seriously," to which Himchan asked "Where?" Daehyun said "Everyone!" And then cameras went to different audience members and put them on the big video screen. There was a pair of foreign girls (so pretty, whoever you two are!! XD Youngjae said all smugly "Those are my fans"), several groups of Japanese fans (including some ahjumma fans lol) and then this really cute maybe 10 year old boy who looked so shocked and shy to be on the video screens he kind of froze ^^ All the members where saying how cute he was and asking where he was in the crowd but he was just frozen and sort of waved his Matoki light stick a bit.

* Himchan & Youngjae's MC Battle Continues
These guys are hilarious, their MCing is the best. Youngjae is always being mean to Himchan, like today Youngjae was interupting and teasing Himchan then Himchan just yelled "(you're) UGLY!" at Youngjae who jsut laughed, and the crowd and the other members just cracked up. Daehyun was especially laughing, he just kept repeating "BUSU?? (the word "Ugly" Himchan used) and doubled up with laughter. Youngjae also said that Himchan's monologue narration was really good, but that Himchan's voice is better than his face, so Himchan at first grinned and said "Really?" but then he shoved Youngjae hard so Youngjae did some silly pose when he regained his balance.

* "Mono Mane" Corner
All the members did "mono mane" (impressions); Youngjae, Jongup and Zelo did "Baikaesu," but Jongup thought they were done and started walking away but almost ran into Youngjae's outstretched hand, sort of jumped a bit, went back to his place and put his arm back up while smiling. Yongguk's "mono mane" was not actually a mono mane; he just said "Conbini..." and held the mic out for the crowd to say "Ikimashou!" (Let's go to the convenience store!) twice, after each time he looked down and shyly said "Thank you very much."  Himchan started talking but Youngjae just ket putting his hand in Himchan's face while yelling "BAIKAESU."

* Zelo's Gwiomi Counting
He didn't do this at the Nagoya concerts, it was freaking adorable. He went up to I think number 6? He also like slapped his butt a bit while counting. Himchan said that since Zelo is the youngest member, anything he does is cute, then he started to poke/run Junhong's face saying "Zelo also has the softest skin."

* Youngjae & Daehyun's Acapella "Goodbye"
After the "Warrior" encore, all of B.A.P came out to the extended stage, and Daehyun "Shhhhh-ed" us quiet. The entire arena was silent but then Daehyun started laughing, so he had to tell us t be quiet again. We were waiting then he started singing "Goodbye" and Youngjae joined in. They got Babys to sing along, but after "Goodbye, Goodbye" we all sort of stopped singing since we couldn't sing in korea, but Youngjae kind of laughed and helped us out, so Dae & Youngjae sang with us as sort of an extra treat after the encore, it was really sweet.

That awkward moment when you just love Yongguk so much ^^

* He seemed extra full of energy today, like his choreography was extra fierce with the kicking and punching for "Power" and "Punch," and he looked like he was "growling" rather than rapping sometimes.
* He seriously made the entire arena scream by just standing there doing nothing, I'm not even kidding; during the MC breaks he sort of stands off to the side contently watching the other members speak, but as soon as his face is on the video screens the crowd just went nuts.
* I can't even explain it, but Yongguk's smile is just the most precious thing in the universe.
* During the rock versions of their songs, at one point Yongguk put his arms out and ran down the stage like an airplane.
* Yongguk sort of put his arm around Himchan's shoulders to move him closer for the last "Uri B, A, P YESSIR!"
* Instead of Youngjae who usually does this, Yongguk pretended to cry when they announced the next stage was their last. He put his arm over his eyes and fake cried, but when he took his arm down he was grinning so awkwardly is was hilarious.
* He was really into his farewell kisses today, he was like jumping and blowing kisses all over the arena before the show finished. He also looked at some fans and blew kisses when he usually just blows kisses to the audience in the higher up seats.

You are such a dork, thank you for existing ♥

* Touchy-feely Himchan was sort of back tonight with his touching of Zelo's face.
* Himchan was so out of breath and sweaty during the show, especially after "Excuse Me," he was supposed to be talking but kept panting and had to catch his breath before speaking.
* He shrugged his jacket off to show his shoulders and just walked around going "IT'S HOT HOT HOT I'M HOT."
* I really like Himchan's thank you message, he says that "Our hearts and your hearts are one, don't you think so?" and he also mentions that they want to do their best in Japanese.

* There were some moments Daehyun got tongue tied trying to speak Japanese but he just laughed it off and continued like a pro, so proud of him ^^
* I think he didn't realized his microphone was that close to his mouth, at one point you could hear him tell Zelo what to say next in Japanese.
* Overall Daehyun was just full of smiles and laughter today during MC breaks, it just made you feel so happy to watch him.
* His Japanese is either really rehearsed or getting really good, he sounds really natural and is fun to listen to when he's MCing.

* What has gotten into Youngjae, jeezuz. Tonight he was rubbing his lips provocatively, bitting his lips and giving the crowd/cameras these LOOKS.
* I can't believe that's all I have to say about Youngjae but seriously, if his goal was to torture fangirls/boys tonight by being sexy as hell, MISSION ACCOMPLISHED.

* So many times that the camera was on Jongup during their performance and he was just grinning and looking like he was off in his own little world.
* During "Punch" him and Zelo had a little boxing match as usual, and after Jonguop got "knocked out" by Zelo, Zelo went and lifted Jongup up and Jongup had that same smiling zoned-out look lol.
* This guy, how does he manage to jump around and do a backflip on a set of stairs, seriously?  Because that's what he did when him and Zelo had their mini dance stage before "Rain Sound."
* I think there is a sadistic coordi-noona on B.A.P's payroll since the pants Jongup was wearing during his and Zelo's dance up to their "Rain Sound" stage looked painfully tight. I'm sorry I notice these things BYE.

* He did really good with his Japanese today and was super proud of himself haha. He sounded like a little kid, but once he said something he was so happy he just started dancing to celebrate. During their "Thank you/Goodbye" message, he had some trouble and said "Japanese is hard" but finished what he wanted to say, but then made this pained face to which the crowd shouted to cheer him up.
* During their bow with their concert staff, they were bowing a long time so Zelo looked up again with a face like "Can I stand up now?!"
* Just like that last show, during "Dancing in the Rain" the other members grabbed him and tried lifting up his shirt but not even a hint of skin for you Jellies.

So I got into the official "Seeing Off" event for Dec. 5, which basically means I get to line up with 100 other fans and see B.A.P walk by us from the venue to their car lol. So please look forward to that fanaccount as well if I survive seeing B.A.P that close ^^

Here are some congratulatory flower wreathes from Tokyo based TV stations, magazines, etc. for B.A.P 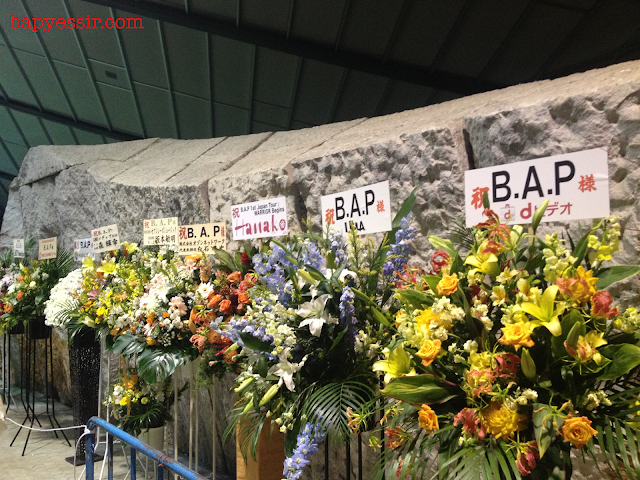 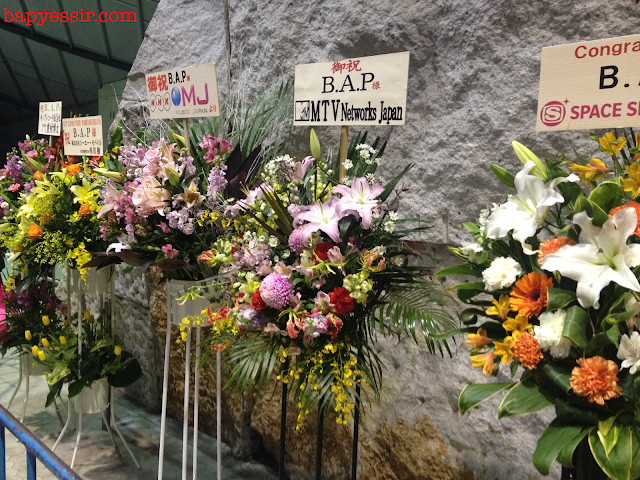